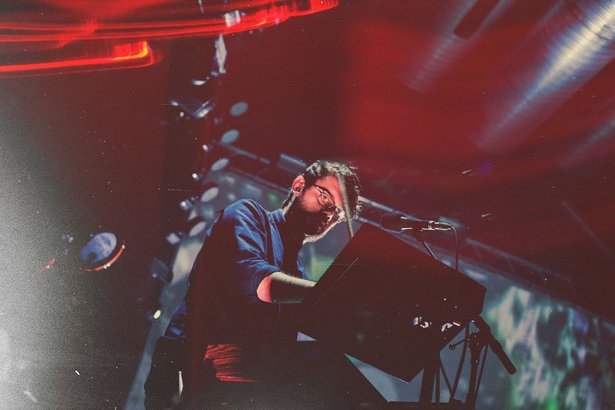 Both as a solo artist and as a member of Gotye, Tim Shiel is a musician who embraces new ideas and challenges. When asked to soundtrack Duet, a puzzle-based iOS game with an evolving difficulty level, Tim designed a musical score to match. We recently caught up with Tim to discuss composing the Duet Soundtrack as on long Live Set, his influences, and sourcing the right sounds.

The game soundtrack seems to evolve dynamically with the progress of the player and the quality of play - how did you achieve this?

The game's core mechanic is very simple, and its visual aesthetic is super minimal. Aside from the fact that the game increases in difficulty as you progress through it, there is not much about the game that evolves from stage to stage. The game is very addictive and potentially hypnotic, but doesn't necessarily tell a story or take you on a journey, so I felt like there was an opportunity for the music to provide that. I wanted the score to be cohesive but also tell a story, be punctuated by specific moments and emotions, different levels of intensity, tension and release. We discussed a more dynamic or non-linear approach to the game's sound - where the music itself reacts to elements of the gameplay - but in the end went with a more conventional linear score. But I think there's enough fluidity and movement in the music that it often *feels* like its reacting directly to what you are doing with your fingers, even if on a programming level it isn't.

What brief did you have from the game makers when you started to work on the soundtrack?

The guys at [Duet developer] Kumobius really gave me a lot of space to work in and very much trusted my judgment which I was extremely thankful for. The only specific reference point they gave for me in terms of music was Aphex Twin's "Xtal", which was a great place to start - that reference gave me the sense that they were looking for something that could be at once electronic and organic, musical but also textural. I think that the guys at Kumobius knew that because the visual aesthetic of the game was so minimal, that there was space in the game for the music to do a bit more of the legwork in terms of providing light and dark moments, contrast and expression. 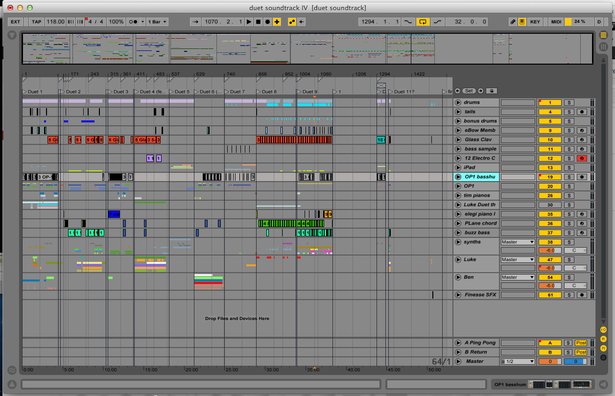 The soundtrack was composed in one long Live Set - why did you decide to do it this way?

I really wanted the whole score to have a very consistent sound palette, and have recurring motifs and elements throughout, so I thought composing the whole score inside one Live Set would be an interesting way to force myself to keep the number of sound sources to a minimum and not get carried away. Its been said many times, but setting restrictions on your workflow forces you to be more creative and often leads to more interesting results, and this is definitely the case working in digital audio where the possibilities often feel overwhelmingly limitless. It also kept me on my toes and forced me to continually be reappraising the score as a entire piece of work rather than a series of separate elements - knowing that any changes I made to the texture of a particular sample in one track would also have flow-on effects in the mix of any other tracks featuring the same sample, meant that the whole score constantly changed and responded as I wrote it, wherever I was in the arrangement. I think the end result is that the score is very cohesive - I'm happy that every moment in the score "feels" like Duet.

Can you talk about where some of your favorite sounds in the soundtrack come from?

Phon.0's Black Boulder drum rack was an important starting point for me, and a version of that drum rack (with some of my own sounds added) ended up being the main kit for the entire soundtrack. Finding a mix of electronic drum sounds with more natural sounding wooden percussion and room sounds, felt like it was important to get that balance of artificial and organic sounds. I also used Teenage Engineering’s OP-1 extensively for synth sounds and for noise and improvised drone effects, plus I also really enjoyed using SonicCouture's eBow Guitar to punctuate certain dramatic moments - even though the eBow guitar pack is specifically great for creating ambient and textural wash type sounds, I sort of took it off the leash a little and let it get a bit more wild, for a howl-at-the-moon kind of sound. I think there are some moments where there is a really nice interplay between the virtual eBow guitar, and the live lap steel guitar parts contributed to the score by my Gotye bandmate Ben Edgar.

My favourite sound however is one of the game's sound effects - a rewind sound that happens every time you collide with one of the game's falling bricks (which is frequently). That collision and rewind sound was made inside the OP-1's virtual tape machine, which has its own tape effects. I could listen to the sound of the OP-1 rewinding all day so it was fun to have a really appropriate place to use that very distinctive sound.