With the album “Making Mirrors” and the chart-topping hit “Somebody That I Used To Know”, Walter “Wally” De Backer aka Gotye has ascended to superstar status in record time. Having used Ableton to compose and arrange his album, the Belgian-Australian artist now trusts Live to help him take his music to the stage.

In our featured artist video, you'll see a stirring performance and learn how Wally and Tim Shiel (electronics) use Ableton Live as the central hub of sounds and samples for their live performances.

In this interview, Wally reveals further interesting details about how he and Tim Shiel achieve the core of the band’s sound with Ableton Live.

In adapting your music for live performance, was there something that was particularly important to you?

Initially, I asked myself whether studio recordings, reproduced more or less faithfully on stage, could be interesting. For this tour I decided that yes, they could, but it was very important for me to play as many sounds as possible live - triggering samples in real time, for example. That way the human factor, including the possibility of making mistakes, comes into play – something electronic music otherwise often lacks.

How did you prepare your studio recordings for live performance?

I’d already recorded some sounds as playable multi-samples in Live, so I only had to copy them from the studio Live Set to the stage Live Set. Tim and I chopped up all the other important elements of my studio session into samples and transferred them to the stage Live Set so that in concert, we can trigger them with our various MIDI controllers.

Which MIDI controllers do you use on stage?

Tim plays a Novation Launchpad, an Akai MPK mini and a Roland SPD-SX. [Plus, a Clavia Nord Stage 2 on some songs.] For just firing off standard effects samples, I often use a Launchpad as a trigger. Unfortunately, it doesn’t have velocity-sensitive pads for when I want to play dynamic multi-sample instruments. That’s why I play all the dynamic sounds with a [Alternate Mode] malletKat PRO. It’s played with mallets, which is great for me since my main instrument is drums. Otherwise, it’s just a normal MIDI controller that I use to control sounds in Ableton Live – it has no internal sounds of its own. 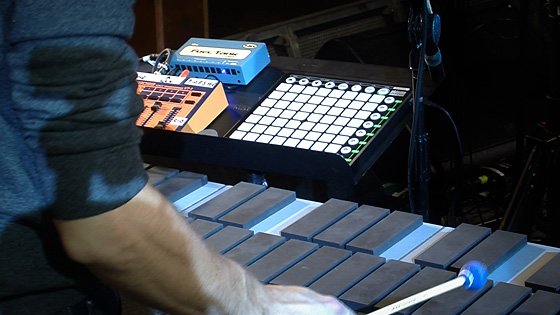 The way you guys play your controllers on stage is very physical...

Yeah, that’s something that’s often missing in electronic music. Sometimes, when I see an electronic artist on stage I think to myself: “They're pretending to play with cutoff and resonance, but they're not even doing that.” No matter how fantastic the sound is – if the audience can’t comprehend what the performer is doing, then there won’t be a real connection between them. I think, for electronic music, the visual aspect is extremely important. The audience should be able to see and understand who is triggering or modulating what sounds at any given time. The controller doesn’t have to be in the audience’s faces either – there are more subtle ways to do this.

How many computers running Ableton Live do you use for your show?

We have one main laptop running Ableton Live, providing all the sounds and samples that Tim and I play during the show. In addition, we have another laptop with Ableton Live positioned by our drummer, Michael. Some of the backing vocals that Tim and I can’t trigger come from there, along with all the visuals for our show: in 1920 x 1080 full HD.

And which laptops are you using?

We just got the simplest Mac Book Pro model we could buy, but I put the fastest solid state drive I could inside it. Additionally, all the samples that we play are on external drives. We haven’t had a single crash or any other kind of computer problem yet. And to make sure that it stays that way, we’ve invested in high-quality solid state drives – they’re just more reliable on stage than normal hard drives. 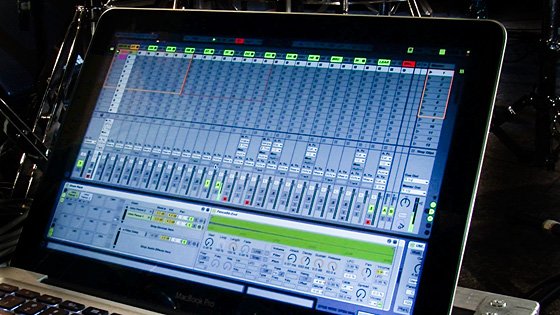 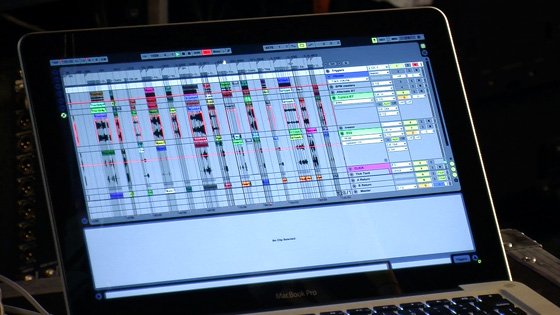 Gotye’s live performance uses two laptops running Ableton Live. The main machine provides Gotye and Tim with all their sounds and samples (above). A second laptop is used for some of the backing vocals as well as for the visuals (below).

How is the Live Set on your main computer organized?

All the sounds that Tim and I play during the show are in a single Live Set so that we never have to reload anything and can spontaneously change the order of songs at any time. In this Live Set, each song has two group tracks: one group for Tim's sounds and one for mine. Each group has its own MIDI tracks containing the sounds that we play with our controllers in the different song parts. In my case, the Launchpad and the malletKAT. My MIDI tracks usually contain Drum Racks, and sometimes just the Live Sampler.

How do you change settings for the various songs on stage?

Our main stage laptop is positioned by Tim. It’s on the floor because he doesn’t have to touch it once during the show. To switch to another song, Tim puts his Launchpad in Mixer mode and turns off the groups tracks from the previous song and turns the next song’s group tracks on. Then he changes his Launchpad back to the User 1 mode, and can start triggering the sounds of the next song on his pads right away.

Is there something in Ableton Live that you would like to explore more in the future?

Yes, a lot. Sometimes I notice that Tim and I do certain things completely differently in Live. Tim will do something which amazes me and I’ll ask him: "What was that just now? How did you do that super time stretching thing on that track?" and he replies," It's simple dude, you just drop the sample here and voilà!" I would have done the whole thing in a much more complicated way and so I'm always surprised by the possibilities and how quickly and easily they can be achieved.
It's nice to know that there’s so much left to discover in Ableton Live and that I still haven’t exhausted all its potential. This is something I really love about Live.