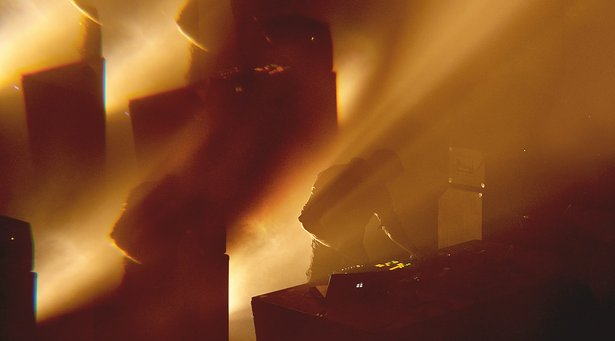 What makes a good music festival? What kind of experience should attendees have? Should a festival be a space of total escapism or should real-world and extra-musical matters be somehow reflected in its programming? How much context is needed when encountering new music? And is a festival essentially something to consume or something to engage with on multiple levels?

Here in Berlin, we are a bit spoiled for choice when it comes to music festivals, but despite the crowded field, the annual CTM festival is a definite high point. In addition to the exceptionally well-curated program of performances, CTM have also continually expanded the parameters of what a festival can be by providing challenging answers to the questions above.

We wanted to explore the curatorial thinking responsible for one of our favorite festivals, as well as present our partner for the concert program that runs parallel to the Loop summit. So we sat down with CTM co-founder Jan Rohlf to discuss the work of putting together a festival and the challenges and opportunities of creating meaning around cutting-edge music and sound.

CTM is subtitled “Festival for Adventurous Music and Art”. What does adventurous mean in this context?

CTM started as a festival for electronic music back in 1999. At the time we were witnessing the emergence of an interplay between electronic music, digital media, and media culture as a whole. Labelling the festival as electronic and digital back then made sense. It was a tangible, real thing that defined the scene. Over the years we realised that “digital” and “electronic” permeate every nook and cranny of music-making. Today, we’re approaching a postdigital age, in which digital as a concept becomes all-encompassing, ever-present, and therefore invisible. It no longer makes sense to categorise something as purely digital or electronic, since the definition can be applied, at least in part, to all music.

"We’re trying to demonstrate that genre and technology are irrelevant – it’s about the approach, the fundamental concept."

So we decided we needed to change our definition. As curators and music-lovers, our passion isn’t limited to one specific genre or definition. Any music that’s interesting can inspire or move us. We chose adventurous music to indicate that we’re looking for music that takes a risk – be it aesthetic, political, or performative. We’re trying to demonstrate that genre and technology are irrelevant – it’s about the approach, the fundamental concept. It’s about music that wants to be understood as art and we want our contributors to create experiences that challenge the audience instead of merely inviting them to consume.

CTM has included retrospectives such as the 2014 exhibition Generation Z, that look at pioneers and precursors of today’s aesthetic movements. What does looking at past developments in this way give us today?

This is an important point. The festival was created to be more than just a place to meet people, exchange ideas, or have some intense experiences. We want to create a space where new experiences can happen and at the same time encourages reflection. We want our audience to be able to contextualize their experiences at the festival. Many of the festival’s elements attempt to create this mix of experience and simultaneous reflection. Showcasing the history of a relatively young art form like electronic music is a part of this. Digital and electronic music didn’t start in the nineties, when techno came about; there’s a trove of ideas and exchanges between people, places, and technology that both informed and precede techno. We aim to promote people’s awareness of this history, in order to cultivate greater understanding.

Generation Z was a research project by Andrey Smirnov that was conducted over a number of years. The study showed that many of the technological advances that we believe to be a part of the west’s economic and technological progress were actually developed in the Soviet Union at the start of the last century, either before or simultaneously with the west. In the Soviet Union these developments were informed by a revolutionary agenda: to create a new society for a new humanity. Much of the technology that we take for granted – such as Leon Theremin's Rhythmicon (the world's first drum machine), the synaesthetic interplay of video and sound, and the foundations for optical synthesizers – emerged from an entirely different context in the Soviet Union. The project showed us that music is deeply connected to broader technological progress and that’s what we want to demonstrate at the festival.

The CTM program also presents works that are still in progress. What’s the reasoning behind this approach?

Festivals today need to be more than just a survey of what’s current and hip. We think a festival should also allow new experiments to take place and give the public a glimpse into the musical and artistic creation process. That’s why we always have a number of projects that create works while the festival is underway. A while ago, in conjunction with Peter Kirn from Create Digital Music, we developed Music Makers’ Hacklab, a collective of 20-30 people, who all have their own artistic projects, but come from a wide variety of disciplines. It’s a gathering of hackers, developers, musicians, and artists that work on projects which they present toward the end of the festival. We wanted to facilitate a forum where artists get to present their unfinished works to each other, in order to find some common ground, overcome obstacles, or come up with new ideas.

A mini-documentary on MusicMakers Hacklab at the 2015 CTM Festival

CTM is part of SHAPE and Berlin Current, two grant programmes for young artists and musicians. What are these about?

A cornerstone of our work is the collaboration with other festivals, organisations, and guest curators. This has always been important to us, since we’re something of a collective ourselves. We need a constant flow of creative input and output, and thus need to spread our network as wide as possible. One of the networks that has emerged over the years is ICAS, International Cities of Advanced Sound, a collective of 35 festivals and organisations similar to CTM, that spans four continents.

"Digital and electronic music didn’t start in the nineties, when techno came about; there’s a trove of ideas and exchanges between people, places, and technology that both informed and precede techno."

Within these networks we develop projects, and SHAPE (Sound, Heterogenous Art and Performance in Europe) is a current project that we run with 15 other European festivals. Each partner gets to choose 3 artists they’d like to promote over the course of one year, and the EU funds that are available to us are then used by the partners to realise projects in conjunction with artists. It means partners can realise projects quickly, leading to more shows, projects, and a constantly growing network.

Berlin Current is a project we run with Musicboard Berlin, aimed at supporting young artists from Berlin. We organise local concerts with different partners, such as Berghain in Berlin, and, more importantly, arrange shows outside of Germany that we invite Berlin artists to take part in. Commissioning works from artists also play a part when you want to foster music and art. We want to offer artists the possibilities we were offered because of the festival.

Do you have any favorites in Berlin Current or SHAPE that you’d like to mention?

That’s difficult… Lorenzo Senni, to name one. He’s an artist who’s long occupied himself with the affective qualities of music. What direct physical effects – ones that bypass the conscious mind – does music have on our bodies? Can it impart a direct physical change in us? Lorenzo Senni is primarily interested in rave culture, specifically in the trance genre and the specific audio signatures used therein. In this music, it's not only the sounds themselves, but also an array of dramaturgical elements which are deployed with the intention of inducing certain physical and psychological states. When you look at Lorenzo Senni’s work, it becomes clear that music is a tool to modulate consciousness, perception, and individual states that have the potential to become collective states. For instance, at a rave, individual states become the collective state of the raver community. Music can be used to think about these things, but outside of music these ideas become even more apparent, when people try to subvert consciousness and emotions through technology.