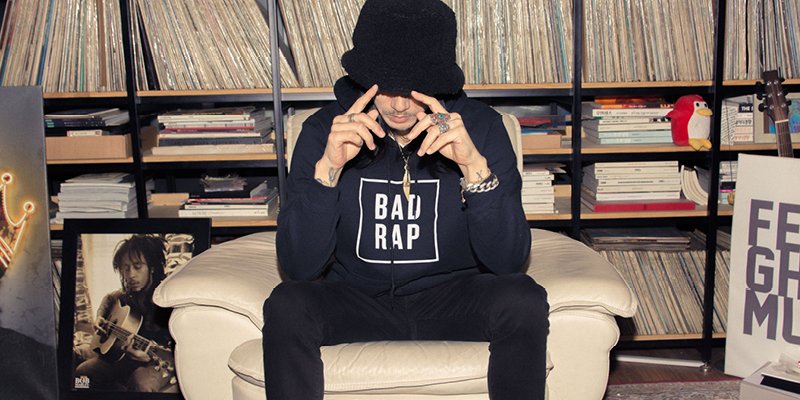 If you listen to much K-pop you’ll know that a rap verse will almost inevitably be dropped into any major hit these days – usually right after the first chorus. You could almost call it a tradition. But it wasn’t always this way with hip-hop in Korea. Back in 1995, when Korean-American rapper Tiger JK returned from LA and released his debut, Enter the Tiger, mainstream media reaction ranged from “Something is wrong with this recording” to “This is not even a tune.” Fast forward to 2022, and thanks to the popular TV rap talent show Show Me The Money, hip-hop is now one of the most popular music genres in South Korea.

The intervening years of hip-hop’s growing acceptability in Korea saw Tiger JK continue to release new music – most prominently with his enormously successful group Drunken Tiger. And while he always stayed true to his rap roots, some changes have accumulated over time: back in 1995 Tiger JK could only converse in basic Korean, but today his flows are poetic, he’s well-versed in the nuances of the language and is considered by some to be the greatest rapper in Korean history. He’s also branched out in the business as the founder and CEO of Feel Ghood Music, his agency and record label with releases by the likes of BIBI and his wife Yoon Mi-rae.

One further, if as yet little known, aspect of Tiger JK’s creativity is his work as a beatmaker. From the earliest Drunken Tiger tracks to newer Tiger JK releases, he’s often been directly involved in the production side of his music. And as he explains in this interview with Ableton, cutting up samples, sourcing drums and making beats have been part of his music-making repertoire all along – and as Tiger tells it, are exactly the things he most looks forward to working on these days.

Most people are unaware that Drunken Tiger is also a beat-maker.

They treat me like a figurehead, not knowing which songs I’ve made. They ask, “Who’s in the studio to make a song we’d like?” In the beginning, I didn’t have money to buy a song, haha. We needed a good loop for a rap so we got AKAI MPC. I’d find a good break from a vinyl, place samples on it and tweak time stretching. They weren’t great but I kept making beats.

Thanks to swing and quantization on MPC, we ended up with unique music even from mistakes. It wasn’t a loop I had envisioned initially, but I just wanted to get the beat done and rap. Haha.

I recall a number of Korean music samples, such as Seong Jaehee’s “Why"” and Cho Young Nam’s “What is Love?".

I have around 10,000 vinyls, which include hand-me-downs from my dad and those I’ve bought. But true inspiration came from MC SOLAAR. He was like a god in LA. He rapped in French, which wasn’t an issue. On the contrary, it was cool. That’s where I got the idea that sampling Korean sounds would be cool. But then, people didn’t know about sample clearance. Label told me they’ll sort it out with the Music Copyright Association. I was told not to worry, only to find out later that the sample wasn’t cleared. Once I realized, I cleared all the samples – going as far to seek the family of the late artists. And yet, people didn’t get it. They just called me soy-bean-paste-hip-hop or bbong-hip-hop [a derogatory term for Koreanized hip-hop].

So you make the loop and write a few verses before working with a producer?

This is also a little known fact, but my wife Yoon Mi-rae makes music too. She made Drunken Tiger’s  "I Got You", "Drunken Rapping" and "One is Not a Lonely Word". People in my company all make music. For instance, a manager plays the guitar and an A&R plays the piano. There’s always a ‘song camp’ going on among us. Once I create a loop, other members add on and continue the production process.

What’s your standard when it comes to hiring other producers?

We look for an outside producer when we want to free ourselves from our strong style. But there isn’t a strict sense of hiring an outside producer. Since the ‘Movement’ [an expanded crew centered around Drunken Tiger] days, we have been making music with our friends. For instance, each member in the Movement was a rapper-cum-producer. We had no other choice because back then people here didn’t understand hip-hop. When The Quiett said, “Bro, here’s a loop I made”, I’d change a bassline or Mi-rae would add on the piano. No one thought of making money from beatmaking. There was never a monetary transaction among us.

Are you torn between what you’ve been successful with, as in ‘boom bap feels comfortable and natural to me’ and ‘I don’t want to lose track of the latest taste’ type of thing?

I’m simply a big fan of hip-hop. From bossa nova to alternative music, I like a wide range of music. But my favorite was LA’s underground hip-hop, such as Freestyle Fellowship. I liked their playful lyrics, using unique beats and words. I never insisted on boom bap. People think so only because I got famous from boom bap. I made different styles, like ‘Freaky Deaky Superstar’, ‘Convenience Store’ and ‘이놈의 (God Damn) Shake it’. I have been rapping on trap or on ambiguous beat, and I can now rap on any beat. When I took part in Woo Won-Jae’s song "Again", someone commented online that “JK doesn’t settle for just one style. I admire him for trying out a new approach.” I was grateful. I always want to try new things.

On the other hand, your interest in reggae and dancehall is consistent.

Before falling for hip-hop, reggae was my favorite genre. I loved Eek-a-mouse. Reggae style and beat were a huge inspiration too. Even after I started hip-hop, I couldn’t hide such taste. Before, some might sneer at me saying, “Why is he squeezing his voice like that?” Today, as you can see from Chance The Rapper, reggae influence is more common.

The status of hip-hop in Korea has come very far from where it was when you debuted.

After holding out for so long, they now call me a legend. But until my 8th album in 2009, going on air was near impossible. To stand – even with a tiny spot – next to stars like Seo Taiji, BTS, Blackpink, I fought with a sense of alienation and of inferiority for a long time. But my albums always sold well. We sold around 200,000 to 300,000 albums on each release. I believe there were plenty of hip-hop fans. It just wasn't mainstream. It was just a matter of not having media attention just because hip-hop wasn’t K-pop.

So when did you start using Ableton Live?

Around the 7th or 8th album. So I guess around 2009? I’m not into technology so all I can do with a laptop is type the lyrics. Producer The Loptimist, who I really admire, had a big influence on me. I highly value the vibe of The Loptimist’s groove. I think of him as Korea’s DJ Premier or J Dilla. So I always thought he'd be working with samplers and he's the ‘real deal.’ But one day, I saw him working on his laptop. He cut his sample in 15 seconds, which would’ve taken me about a week. He told me, “Focus on your rap. If you have a good sample, give it to me. I can cut it for you in 10 minutes.” 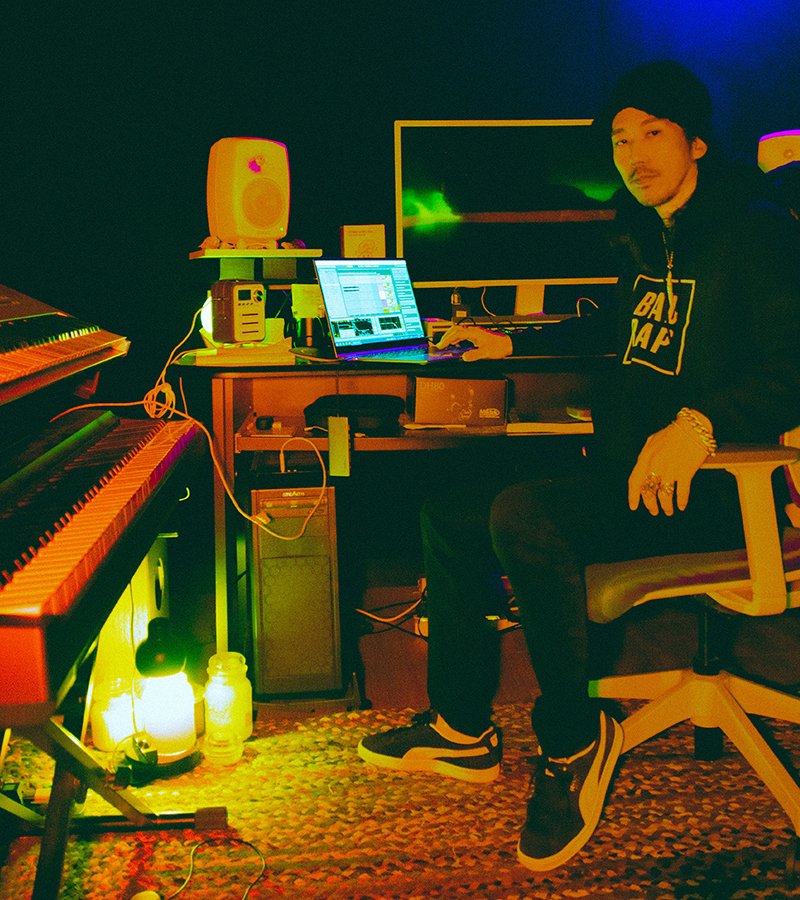 Is that when you switched to Ableton Live?

Nope, I turned a deaf ear, haha! Then, even the tech-savvy avoided the Ableton Live out of fear due to its difference in style. One day, I had enough. The Loptimist installed Ableton Live 9 on my laptop. It sounds very rudimentary, but I will never forget the shocking moment of seeing the BPM of a sample automatically set in Session View mode, haha.

It must’ve been a whole new world.

I used all the songs that I previously thought would be too difficult to work with, even though I’d wanted to use as samples. I said, “This is sick.” With a grin, the Loptimist showed me something more shocking. Chord generator and Beat generator. They were only released recently, but about 7 or 8 years ago, The Loptimist made them with Max for Live. It was dope.

What kind of hardware do you use with Ableton Live?

Push, Novation Launchkey, MPD, Korg Nanokey, and many other hardware. But I don’t think it matters what I have. It’s more important that I’m using things that I thought were useless and wanted to get rid of – like Novation Zero SL Mk2 – with Ableton Live now. I yearn for late night to come. It’s the only time of the day I’m free. I go online, on Youtube, look for tips and study presets. Above all, I’m spending all my allowance on it, haha. It’s not like Ableton Live made my music better out of the blue. But it definitely made it more fun to make music. It has everything that I wished that MPC would have had when I was younger. 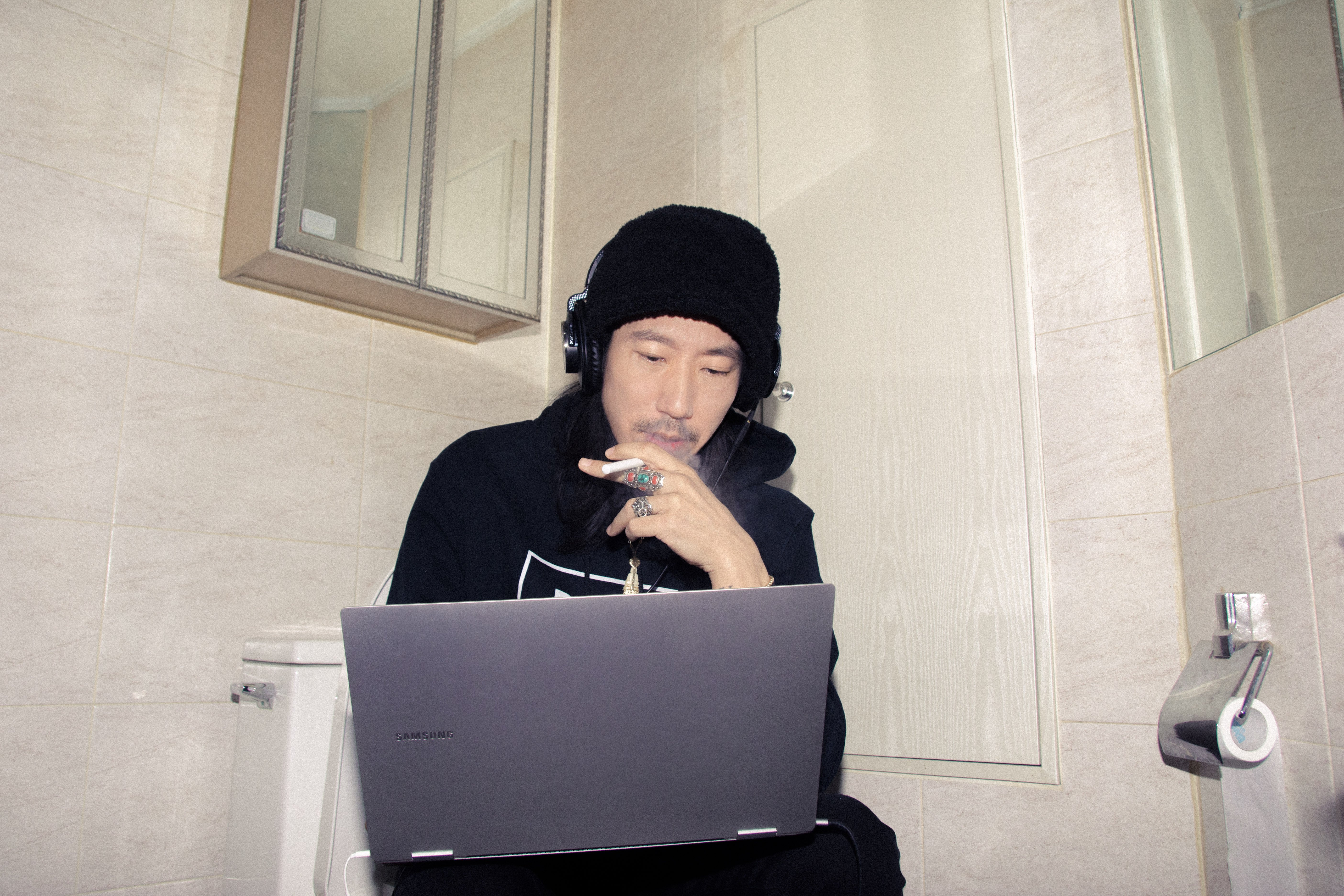 What is the biggest change in your music production after using Ableton Live?

Until just now, I was just bragging. Haha. The best part is that I can conjure up something immediately after envisioning it. Mi-rae finds it incredible to see me, someone who usually struggles with a computer, making something easily. That’s why sometimes I move my fingers faster whenever she looks at me, as if I’m making something great, even though I’m doing the simplest thing on Ableton Live. Haha.

There was a big leap in your career recently – you released 10 albums under the name Drunken Tiger and announced there will no longer be Drunken Tiger. How did you come to such a decision?

I’m a sloppy legend. It’s not like I went big overnight and earned tons of money. Media don’t treat me well enough to be considered ‘special.’ They only look for me when they need someone to call a ‘godfather of hip-hop’ or a ‘legend.’ I just want to try something new and do what I want. But lately, comments like “It’s not Drunken-Tiger-like,” or “he’s trying too hard to appear young” abounded. The name ‘Drunken Tiger’ felt like a shackle. I wanted to put the name and its halo in a time capsule. Only after that, I felt at ease. I recently did a jingle with BIBI, which garnered over a million views. Someone commented, “I didn’t know Tiger JK can rap to the melodic taste of millennials and Gen Z.” Perspective is daunting. I did as I’ve always done. But once I got rid of my name they thought it was new. If I tried the same thing in a Drunken Tiger album, they would’ve hated it.

I heard you’re planning to release the first album under the name, Tiger JK. How would you say it’s going?

The songs I’m working on, they’re all very different. It can be said that the intention is to create something that doesn’t pander to current fashion, trends, charts or public opinion. Apart from that, my goal this year is to release a mixtape with all the beats I’ve sketched using Ableton Live.

Exactly. Going back to the beginning. It feels like starting anew.

Text and interview by Jung Wooyoung, translation by Jieun Choi