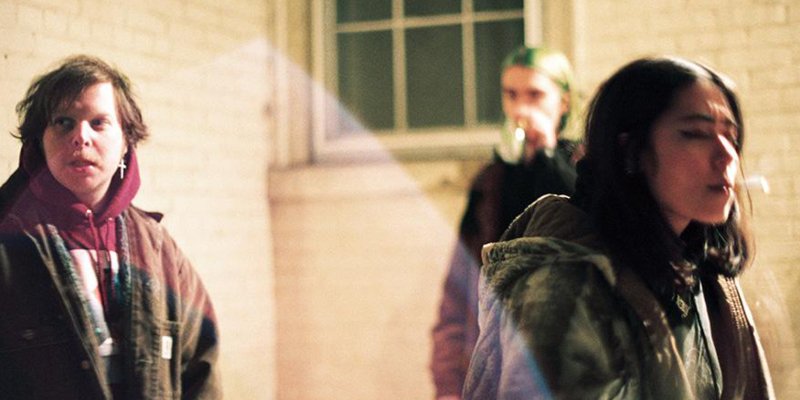 Among the current crop of American indie bands, Spirit of the Beehive is without doubt one of the most original and idiosyncratic outfits out there. Debuting in 2014, the Philadelphia band’s sound has evolved to incorporate ever more startling combinations of DIY post-punk, psychedelic rock, synthpop and electronics along with occasional gentle interludes of acoustic guitar and vocals that seem to be beamed straight from a warped VHS of someone else’s camping holiday. Attempts by music journalists to describe the band’s sound have frequently landed on adjectives such as cryptic, obtuse, reclusive, paranoid, intense and – best of all – indescribable.

Spirit of the Beehive - “The Server is Immersed” from the album Entertainment, Death

However, listening to Spirit of the Beehive, what one hears is a band whose musicianship is both simultaneously loose and taut. However extreme and disorienting the rhythms, harmonies or textures in their songs may become at times, the deployment of these elements never seems random – every parameter and every arrangement sounds purposeful, composed and nuanced. Perhaps this has something to do with the band’s DIY punk origins, where the constant gigging may have synced the band performatively while keeping them true to their experimental impulses. Whatever the reason, Spirit of the Beehive’s singular path has led them to Entertainment, Death, their latest, probably most radical, and yet most engaging album.

We spoke to Spirit of the Beehive recently about making and performing their first entirely self-produced record and new sounds and techniques they used. As the band’s drummer, keyboardist, and sampler wrangler Corey Wichlin notes the through-line has always been the band’s drive to explore compositional tension and release – an approach that can be applied to just about any aspect of their music. “We use a lot of transposition and tempo manipulation to induce anxiety or dread,” says guitarist/vocalist Zack Schwartz. “But we also like to play with space, where certain sounds hit you in the stereo field.”

Spirit of the Beehive – “I Suck the Devil’s Cock” – The longest track on Entertainment, Death with transposition changes, tempo manipulation and stereo placement all deployed to uneasy effect

Before 2020, the band’s Zack Schwartz recalls the songwriting process being more traditional. Tracks would start at one of the band member’s homes before getting fleshed out in practice sessions. Little by little, this process accumulated more electronic elements. “I would typically have the idea of the whole song ready to learn at practice and we’d go from there,” says Schwartz. “We recorded with synths but didn’t incorporate them live until a few years later. The most we’d explore electronically was maybe using drum machines occasionally.”

However, making Entertainment, Death during the isolation of the pandemic meant incorporating yet another electronic component into their work – emails. Tons and tons of emails in fact, with ideas and sound files flying back and forth, and much accompanying discussion about which ones fit together on a record cohesively.

“When recording parts, I would often record excessive amounts of parts on a song and send all of them, knowing that many would be cut, so that we had options when it came time to mix,” says Wichlin. “The same goes for effects and synth patches,” he adds. “I would end up recording the same part multiple times through a different hardware effects chain or using a different keyboard so that when we had the context of the full arrangement in there and we could audition different sounds.”

Schwartz says this decentralized approach, for lack of a better term, gave Spirit of the Beehive more time than they otherwise would have had in a proper studio. Emailing musical stems and ideas back and forth wasn’t ideal, but it worked. "The process of making this album was basically the exact opposite of our experience creating [previous album] Hypnic Jerks," Schwartz explains. "We had to record that in seven days, because that was the studio time we had, whereas Entertainment, Death was made over the course of three, four months."

Spirit of the Beehive - “There’s Nothing You Can’t Do”

The members of Spirit of the Beehive own a fair number of hardware synthesizers, guitar effects pedals, and other instruments for sound generation. And in the process of making Entertainment, Death any of that hardware could be used during recording. Schwartz explains: ”We have a pretty decent collection of analog synths, and we’ll usually layer those with certain soft synths that can accomplish things the old synths can’t.” Once the band tracked any instrument, the rest of the processing and mixing happened in Ableton Live.

Spirit of the Beehive also invested in a UAD Apollo audio interface to use on Entertainment, Death, especially for the compressors and equalizers. Compression gets used on vocals, but also delay, reverb, and – in keeping with the band’s interest in the stereo field – chorusing and widening effects. “If something more than that is happening, it’s very case-by-case and oftentimes is more the result of bus processing that is affecting more than just the vocals,” says Wichlin. “For recording, we mostly use effects with sends / returns and balance accordingly but live we’ll usually put the effect on the track itself and just keep the mix lower than if we were recording,” adds Schwartz. In concert, this includes delays and reverbs, but also occasional pitch shifting and a lot of widening techniques.

Spirit of the Beehive - “It Might Take Some Time”

Sampling is also a major production feature on Entertainment, Death. Some of its origins lie in Wichlin’s experiments in running old Library of Congress tapes through a cassette player, on which he would reverse recordings or play them at half-speed. “I would just run that through the Roland SP-404 for the effects,” he explains. “But, yeah, it gets tedious because you have to rewind the tapes to the right spot, and switch tapes constantly during the set, which is kind of annoying.”

Spirit of the Beehive now lean more on software for sampling, whether during the recording process or live shows. While the sampling approach varies, often quite drastically, from song to song, samples can be the backbones for entire songs.

“We have also used them subtly to reinforce mixes,” says Wichlin. “I think samples for us play a role in the world-building aspect of making a record. They can help add context to the story we’re telling in a way that a more traditional sound source cannot.”

“Almost all of us have samplers to utilize live now and we’ll typically use them to play things that were on the record but we didn’t necessarily want to just keep in the backing track,” Schwartz adds. “This allows for a little more improvisation overall. We also sample all of our interludes live so we can play off of each other.”

Spirit of the Beehive - performing live for Fender Sessions

Although Schwartz’s first forays into Ableton Live were in Session View, during the recording and rehearsal sessions of Entertainment, Death, the group found themselves gravitating toward Arrangement View. “Arrangement View is just much easier to use for rehearsal if we need to go over a specific part,” adds Schwartz. “Also, I could never figure out how to do that in Session View. I used to use Session View for recording but it would always make me stuck in 8-bar loops.”

In the live context Spirit of the Beehive use Arrangement View to start songs, trigger samples, process vocals, and more. Wichlin says everything is mapped so that when the band starts songs, Ableton “houses” the drum racks for the drummer’s Roland SPD, as well as all vocal and acoustic guitar processing. Wichlin says everything is automated so that effects chains and drum racks all switch at the right points in time. It all reduces the amount of thinking they have to do live, allowing them to just perform their instrumental and vocal parts. “It’s a fine line between having everything be perfect and everything performed live,” says Schwartz. “We try to scale the playback stuff back as much as possible; it’s disorienting to hear someone play something they don’t see being performed on stage”

What have Spirit of the Beehive learned while recording, rehearsing, and then performing Entertainment, Death over the last two years? “Doing everything ourselves lets us take our time and try things without pressure,” says Wichlin. “We just bought a console, which includes our first non-interface preamps, so it will be fun to use those. We’re also hoping to get some outboard compressors and effects to take mixing out of the box when we want to.”

Schwartz sees another upside in this DIY production approach: the band won’t have to book studio time, then deal with engineers and producers who might get annoyed with their “dumbass requests and ideas.” Software and email also give the band members the freedom to record from their own home studios, instead of always centralizing every creative effort.

“I mean, my studio was pretty bare bones – I just had my computer and some monitors upstairs in my apartment,” Schwartz recalls of his home Entertainment, Death recording space. “I didn't have any soundproofing or anything, although I had a decent vocal mic that Corey lent me, which I also use to track acoustic stuff. But, yeah, mine was pretty bleak. Cory had a little more stuff in his basement, I think.”

Wichlin’s home studio was where a lot of the instrument tracking – guitars, drums, etc. – and final recordings took place. While he admits to having more microphones, he wasn’t operating a home studio with all the bells and whistles that modern technology can afford artists these days, if they have the budget. “I had a Focusrite interface and it was just, you know, an unfinished basement – completely concrete,” Wichlin says. “Pretty difficult to get good sound down there.”

And yet, Entertainment, Death doesn’t sound at all as if it was made in minimally appointed basement studio spaces. This, of course, fits the band’s DIY approach and serves as a welcome reminder that neither studio perfection, nor big budgets but something rather more indescribable are what’s necessary for recording great music.

Loop Session: In the Studio with Grand River