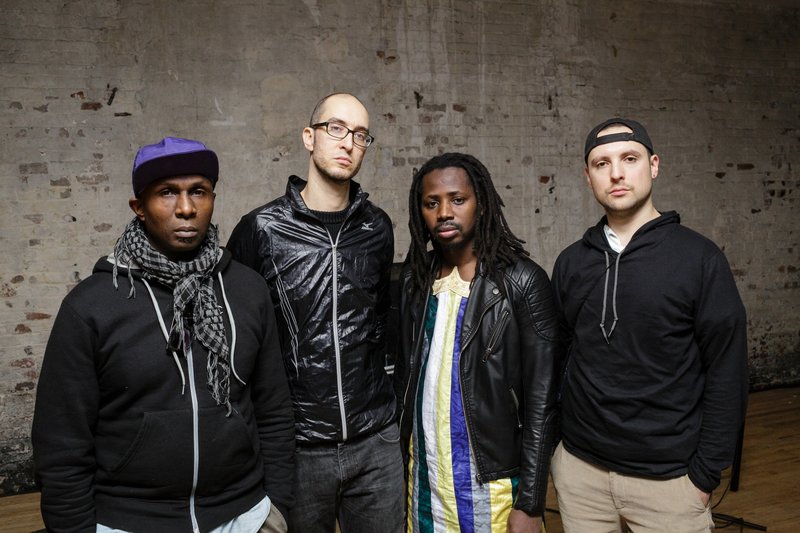 2016 saw the emergence of Sélébéyone, a project that tied together so many disparate sounds, musical disciplines, geographical locations, and even languages, that the result was basically unimaginable before the group came into existence. A collaboration between renowned American saxophonist/composer Steve Lehman, French saxophonist/composer Maciek Lasserre, Senegalese rapper Gaston Bandimic, and HPrizm (aka High Priest, a longtime luminary on the bleeding edge of New York’s underground hip-hop scene and a founding member of the Anti-Pop Consortium outfit), Sélébéyone is essentially a project that contorts and pulls at the points where Lehamn's and Lasserre's slant on contemporary jazz meets with Bandimic's and HPrizm's unique lyrical abilities. Released in August of last year, the group's self-titled debut album convulses with jagged rhythms (often far outside the conventional 4/4 structure), frenzied woodwind runs, textured sound design layers, and unconventional lyrical performances both in English and — in the case of Bandimic — in the Senegalese language of Wolof. Fittingly, Sélébéyone is a Wolof word that translates to "intersection".

An accomplished saxophonist and composer with a long and wide-ranging discography that shows no predilection for simply adhering to convention, Steve Lehman was responsible for composing, sequencing, and producing half of the works on Sélébéyone (with the other half being taken on by his counterpart in the group, Maciek Lasserre). Impressive feats from both a compositional and technical standpoint, we tracked down Lehman (a native New Yorker who currently teaches courses in composition, jazz, and music technology at CalArts) to get a sense of how the group approached producing the Sélébéyone record, how they are able to perform the songs live, and why Lehman often incorporates live electronics and digital audio into his various musical undertakings.

You've studied the saxophone and composition for a long time, but how did you first get into producing?

I never owned a turntable or an MPC, but I started with Reason and then I think I got Ableton around 2004, and that's when I really started experimenting and seeing what I could do with that side of things. Around that time too, I had heard Anti-Pop Consortium's Tragic Epilogue album and the production on that record really stood out to me. I think there is not much sampling on there (except maybe the group sampling themselves) – it's basically all done with synths and sound design – and the nuts and bolts of those productions just stood out to me: What kind of harmonies are they using, what kind of rhythms are they using, what kind of sound design is in there? There was just this explicit experimentation with sound and sound texture that had a lot of overlap with the music I was studying and immersed in at the time – contemporary jazz or modern classical music or computer music – and aesthetically, it seemed like there was a lot in common.

In fact, Priest (of Anti-Pop) and I met around that time, and part of the way we met was that I had gotten a hold of an accapella version of the Anti-Pop track "What Am I?" and had done my own production for it. We had a friend in common so I reached out to Priest and sent this track I had produced. That was the beginning of our relationship, so once the Sélébéyone project came around, we already had over 10 years of working together under our belt.

When you talk about this early period of you experimenting with DAWs, what kind of music were you producing then? Was the work closer to contemporary jazz, experimental composition, or something along those lines?

It was kind of everything. At first there was just a period where I was just getting to know the materials and see what I could do, just seeing what sounds I could find and how I could tweak things. As a composer (and a saxophonist a bit, but more compositionally), I just like to look at the resources available to me as tools; to not have this sort of man vs. machine divide. Thinking about things like 'What can I do with Live that I couldn't do with acoustic instruments, or at least not as easily with acoustic instruments?' That could mean writing a really tricky rhythm, and knowing it'll be perfect in the computer; or it could be that a composition needs some sound design elements. Or, for instance, I did this record called Demian as Posthuman where the tune "Demian" is a six-minute piece that never repeats and has this very intricate writing for the electric bass and for the chordal instrument, which is something that if I had given to other musicians that I was working with, it would have taken months and months to get it together. In the end, it was much more straightforward to sequence it in Live.

You often work outside the more conventional 4/4 and 3/4 time signatures in your pieces. How do you approach producing in these unusual time signatures? Are there any challenges or tricks you've learned for working with them in DAWs?

Certainly it's rather straightforward to change the time signature in Live, but if you're doing some sort of unusual rhythm where you want something that isn't a simple division of the beat by two or three, then it can be a bit more complicated. For example, say I want the beat to be broken up into seven different parts, something like that can be a bit painful because I have to get off the MIDI grid and eyeball it or figure out if I can do it by hand. But if it really is something that needs to be precise, I will just write it in the notation software Finale – which is sort of limitless in terms of the rhythmic ratios that you can compose – and then I would save that as MIDI and import it back into Live. I've used that technique for a long time.

What can be more tedious is when I am writing music where the lengths of the bars is changing all the time, which is the case for the vast majority of my pieces [laughs]. So it's not just that I'm in 5/4 instead of 4/4, it's that the first bar might last six beats, and then the next one lasts four, and then the next one lasts seven or eight. You can make that work, but it's somewhat tedious, and usually I just have to keep track of it and do some of my own math. Even then, at some point when I try to copy and paste something I end up going "Fuck, where's the beginning of that?" cause I'm just looking at boxes. [laughs] But, it really can be flexible when you use things like Max for Live – I'm a big Max/MSP person – and Finale; between those two I can do most all of the things I need to, like create unusual rhythms, change the tuning of sounds, and things like that.

How did the production and composition processes begin for the Sélébéyone album?

Once we had decided to do this project and everyone was on board, I think the first step was that Maciek [Lasserre] and I got a few sketches together (he's an Ableton user as well) and just sent it around to everyone in the group to see if they liked the direction we were going and things like that. Then in May of 2015, we all got together outside of Paris for a week and had a very intensive period of workshopping, rehearsing, and writing material. That was really where we came to the table to present the musical ideas to the two rappers – Gaston [Bandimic] and High Priest – and started asking questions like 'Could we do something where the time signature isn't 4/4?' or 'Could we do something where the beat measures get cut off every so often?' All in an attempt to get a sense from Gaston and Priest about what they could relate to as lyricists, to figure out how to present these musical and rhythmic ideas in a way that would be in terms that the lyricists could relate to and want to write to. For the most part, it was music first and then the lyrics came afterwards, but I remember that first week in Paris, we were all really working around the clock. Then after that intensive session, we had about six months or so where we each individually were editing or revising stuff that we had been working on, and we'd email the songs around to each other just to get a status update.

Sélébéyone is a hybrid on so many levels – it mixes genres, it mixes electronics and live instrumentation, it even mixes nationalities and languages – what about the group do you think enabled you to make all these disparate influences and interests fit together into a coherent project?

A big part of what got everything started was that Priest and I had been working together for years, but then through Maciek, we heard this emergent hip-hop community of rappers in Senegal who were consciously making the decision to rap in Wolof. I had heard rappers from Senegal before, but I had only heard them rapping in French, and the Wolof rappers just has a really fresh sound and it became really exciting to think about how to connect with it.

Building off of that, we tried to steer clear of thinking in terms of musical genres or musical milieu and saying things like 'This will be cool because…', and more thinking in terms of the nuts and bolts of the different musical elements we wanted to draw from. Things like, 'Okay, you like hip-hop, but what is it that is going on rhythmically in hip-hop that you relate to? What is it about the way that harmony is dealt with or the way that compositional form functions in that music?' We wanted to think separate from the cultural underpinnings and really get down into those nuts and bolts, and I think that helped us a lot. One thing that I think is distinctive about the project is with the songs Maciek composed, he did all the instrumental composing, all the sequencing, all the drum programming, and all the editing of those pieces; and the same for the pieces I composed, I did all the composing, sequencing, drum programming, and so on. That put us in a position where it's not just a sample being pasted or graphed over an instrumental part, or vice versa, it was all of a single piece. That's something that allowed us to integrate everything in a more thorough and comprehensive way.

I'm mostly speaking for myself here, but I think this could be said about most of the guys in the group. On one hand, I think of myself as believing in the modernist ideal of there still being room for innovation and room for people to discover new sounds and approaches to music that we haven't heard before (even though may seem like something that is hard to believe is true). I still think that idea is something to shoot for, and, at the same time, I recoil a little bit at the idea of a postmodern pastiche that puts a rapper and a guy juggling and some polka and jazz together, even though I acknowledge on face value that Sélébéyone seems like it could fit into that mold.

Again, I think the focus on the nuts and bolts of the music is what saved us from the interest in the project being simply that it was this multi-cultural rap-jazz hybrid, and instead there are these nuts and bolts of each track where we can tell you what we were trying to accomplish rhythmically, harmonically, and all those things in terms of the form separate from ever having to discuss musical genre – you can't just boil the entire project down to a formula.