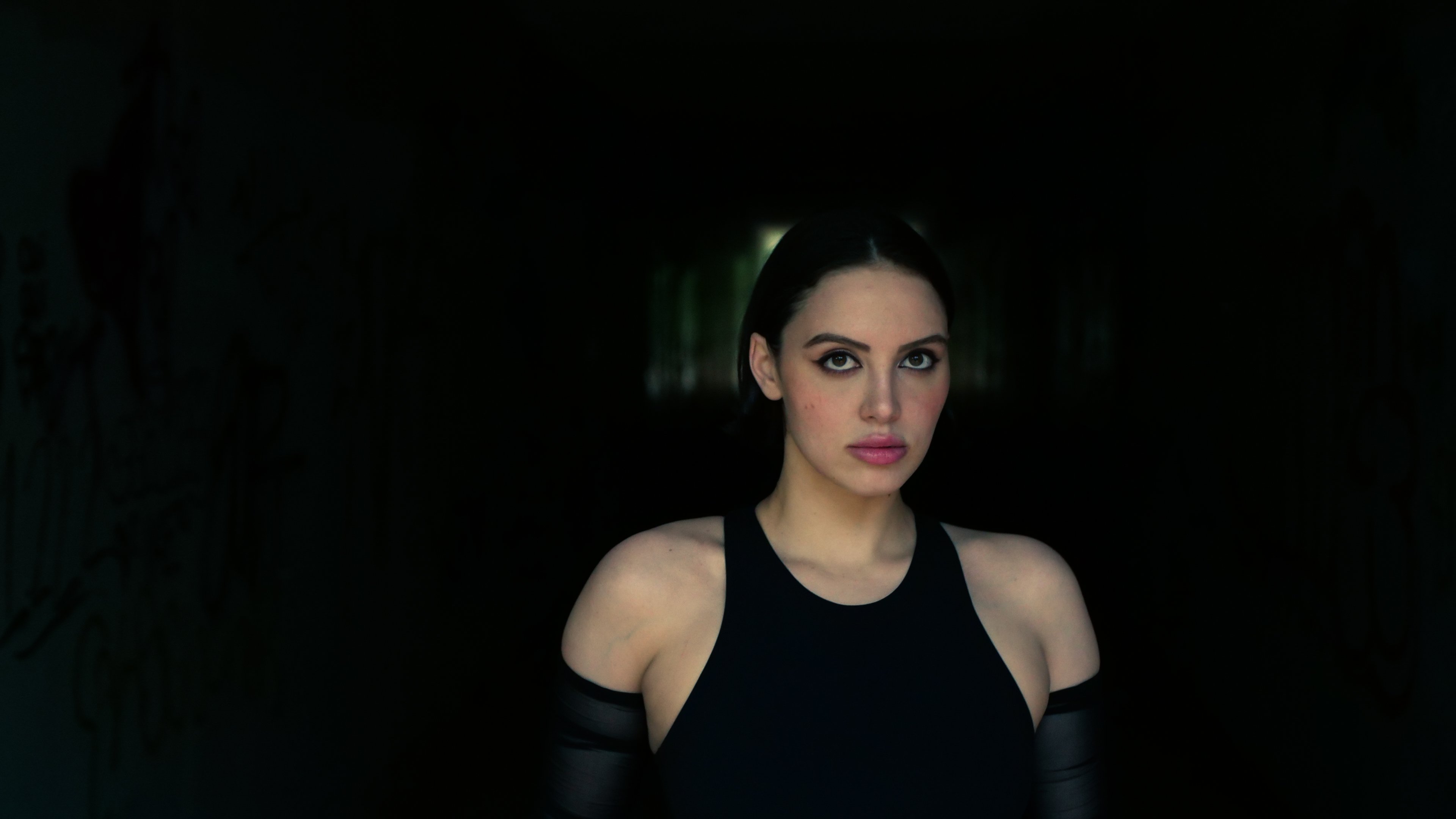 Sara Landry has got builders in. When our Zoom call begins, she immediately apologies for any background noise before making a quip about missing the opportunity to record the hammering and drilling. “I have a bunch of samples already,” the mid-20s Texan assures me. “Usually what happens is I end up scaring them.”

Landry’s music could step up to any busy construction site. It’s been a rapid rise for the Austin-based artist, who now sits comfortably at the forefront of the international hard techno scene. From knockout Boiler Room performances and her infamous warehouse events series KLUBHAUS to breakthrough releases and widespread support from artists like Perc, Amelie Lens, VTSS and I Hate Models, she’s made a name for herself championing playful and surreal flourishes amidst pile-driving, four-to-the-floor kick drums. Her style is proudly peak time, created with darkened clubs and nocturnal festival stages in mind. As such, it seems fitting that, during our call, her face appears on screen in what looks like a darkened void.

“This is my studio,” she explains in the glare of her monitor screen. “It’s draped with these black acoustic sound blankets. I like to create the circumstances in which I do my best work, and bring that energy back in here."

Landry’s approach, and that of her peers, calls to mind the harder-faster ethic of European hard dance scenes such as hard techno and industrial. The difference with Landry’s music is a tendency towards a more abrasive, industrial palette, but the intensity and imposing stature of her music makes it hardwired for big dancefloors and the heightened states they harbour.

“I definitely make stuff for the person who's two tabs deep,” she admits with a wry smile. “When I make weird shit, I'm like, ‘how is this gonna sound to somebody who's high?’ because a lot of the audience is. I'm not trying to encourage anybody to do that, but I’ve enjoyed exploring the life lessons, healing and active listening that can be taught through plant healing and psychoactive substances in general.”

Most varieties of hard dance have moved in step with psychedelic experiences, as producers gleefully explore ways of toying with people in altered states. In Landry’s case, she looks for subtle touches in between the upfront elements of her tracks, whether it’s an offset to the groove at the back of the mix or a reverse kick accenting the thump of the lead drum. On her track ‘Queen Of The Banshees’, she works with a polyrhythmic acid line looping every three bars, “which gives the track that weird, gallop-y feeling.”

Many of Landry’s forthcoming tracks have snuck out in various live streams and online mixes, and you can hear her artistic identity coming into sharp relief as her creative evolution and technical skill cross over in a rowdy, fist-pumping singularity. She’s reached this sound steadily over the past 6 years, developing as a DJ and producer first inspired by early forms of techno and dubstep before arriving at this contemporary, high-definition style of hard techno. It’s a genre which suits her maturing tastes, her sense of mischief and love of serious studio craft.

“I do feel like I have figured out my sonic fingerprint at this point,” says Landry. “But I think that's a combination of technical skill sets, and how much of my work is very much my personality, or an inside joke.”

From arch edits and remixes of tracks like Cardi B & Megan Thee Stallion’s ‘WAP’ to sampling Mean Girls, Landry’s sense of humour comes across even in her heaviest work. Forthcoming track ‘ADHD’ audaciously samples the manic violin of Nikolai Rimsky-Korsakov’s ‘Flight Of The Bumblebee’ and re-frames it in a merciless banger.

“I spent a long time learning the rules so I could break them in new ways. I feel like I have a body of work that demonstrates that's my goal. The ‘Flight of the Bumblebee’ track that's coming out on my label breaks a lot of rules.”

“Taking shit that should not, under any circumstances, go hard and make it go hard as fuck,” she laughs.

Landry declares ‘ADHD’ (which can be heard as the closing track on her Hard Dance 102 Boiler Room set) a fair representation of her personality, and she certainly zips through topics and screen-shared Live projects at speed, but her energy is matched by her knowledge of music production as well as physics and neuroscience. When she talks about her approach to Live, she largely speaks in technical terms.

“I use Live as a musical instrument, but not from the classical perspective,” she explains. “I think of things more from a technical, coding perspective. That's just how my brain works. Live allows me to create my own workflow processes, and then batch them and automate them. The increased macros, snapshots and custom VST building capability in Live 11 makes a huge difference in what I'm able to do creatively. How I deal with my ADHD is to create a structure for myself, and then within that structure, I can do whatever I want.”

Landry also stresses the importance of putting in the hours learning how things work properly, before taking shortcuts. She flicks through banks of Instrument and Effect Racks to demonstrate the time-saving devices she’s made for herself, whether it be an EQ and distortion chain pre-configured to drop straight onto a kick drum, or some Saturators and Resonators to give a sound some “zhuzh”.

“The way I have my stuff set up works really well for me because I already have the neural pathways in place, and I have enough experience that I can now do shortcuts,” she points out. “But I wouldn't do anything like this until you reach the 6,000 hour mark and your ears are trained, because you're going to screw yourself over in terms of your training and building those neural pathways if you start cutting corners early.”

Landry’s shortcuts are all about minimizing the time spent on repetitive technical tasks to enhance her creative flow. If she wants to drop a trance lead into her track, she knows she has a rack set up which will cut off unwanted frequencies and add the colour and character she likes, without having to go through the process of loading up five individual devices. As someone who prefers mixing her tracks as she writes, being able to quickly call up necessary effects means engineering doesn’t interfere with composing.

“Saturation varies depending on what I'm trying to do so I leave those at stock settings,” she explains as she guides me through some of her Effects Racks, “but I have custom presets on my EQ Eight so it's ready to go whenever I drag it in. It's got a shelf because I don't like the timbre of the low cut most of the time. I have a compressor set to roughly what I like for side-chaining, which I can then quickly tweak depending on the BPM of the track. Custom racks save so much time for parallel processing too.”

True to her character and the organized structure of her Live projects, Landry has a methodical approach to making music. She always starts with the drums, treating them as the foundation upon which to build the rest of the track. She makes sure they’re fully programmed and mixed before doing any melodic or textural work.

“The first thing that happens in every single track is the low end,” she explains. “First things first, I build the kick, then once the kick is done, I'll put in the top layer of the kick, and then a little bit of a roll if I want some space, or a little sub layer or a reverse groove kick or something. I'll get all of these little pieces locked, mixed, loaded, finished, before I do anything else, because if you start adding shit before your low end is locked, you're going to have a harder time cleaning it up at the end.”

While she describes this part of the process as getting the job done to move on to “the fun stuff”, Landry doesn’t treat building her drums as a purely perfunctory engineering job. Even the kick drum requires a creative approach on every track.

“I always make a new kick every time,” she points out. “They always have a very specific timbre, because if I want to play two Sara Landry tracks back to back in a set and they’re in the same key, I don't want them to have the same kick. Because then when I'm mixing, it's going to amplify the phase.”

Beyond the kicks, every element in Landry’s projects has a generous amount of device chains shaping and honing the sound. She often turns to Resonator or Corpus to add harmonics to a pad, or “to take something that's very atonal and give it a tone.”

“I have a Russian nesting doll situation of distortion happening in every track,” she explains. “There's like five different layers. And the important thing if you're adding harmonics, or adding a little ‘zhuzh’, is to make sure you’re gain staging and not just making something louder. So I use a lot of safety limiters.”

Along with finding a pocket for every element on the frequency range, Landry also aims for clarity with her use of effects, running her reverbs and delays in parallel to avoid muddying the sound. Parallel processing also means being able to apply different reverbs to different sounds.

By mapping out so many of these exacting mixing processes as devices, racks and macros, Landry has created a system in which she can deliver a fully engineered, high-end sound in a short space of time. It’s a good thing, given her steady workload of remixes, edits and productions. But, true to the wild energy of her music, it also helps that she doesn’t like to overwork a track.

“I am a big believer in ‘touch it once,’” she says. “The most magical, innovative or weird ideas are freshest when they’re first conceived. The longer I listen to something, the less cool it sounds. It's always a battle between trying to preserve the magic of the initial idea… and not giving myself ear fatigue.”

Text and interview by Oli Warwick

Spirit of the Beehive: Indescribable Intensity