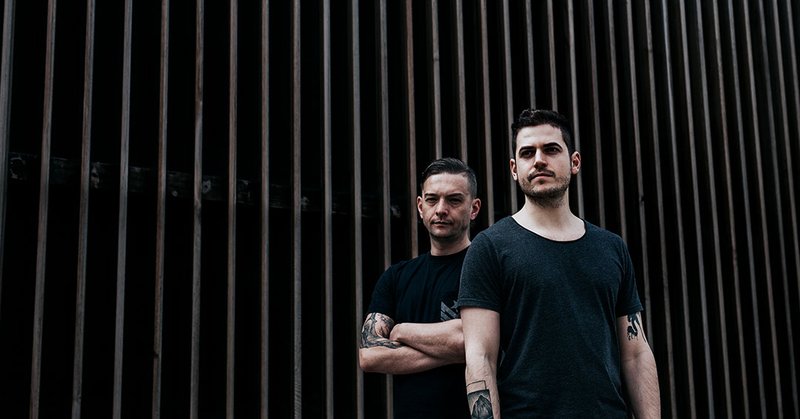 Collaboration is not something that comes naturally to every music maker. Especially for those working in the electronic music world, where one person is often capable of doing everything by themselves, it can be difficult to even define roles. And this is even before the whole issue of finding a shared vision, or the psychologically tricky matter of striking the right balance between contributing, accommodating and compromising that any partnership requires.

It probably helps when the people involved in a collaboration have a few years of production experience and a well-defined sound aesthetic to their names. Such is the case with Conviction, the first collaboration between Mads Lindgren aka Monolog and Kostas Katsikas aka Subheim, two multifaceted electronic artists, whose individual sonic signatures – Monolog’s unforgiving drum rhythms and heavy basslines, Subheim’s fragile melodic undertones and lush ambiences – blend together particularly well.

We caught up with the two Berlin-based producers for a chat about their collaborative process, the hardware and software devices they used and how they manage to achieve such precise and powerful mixes. The two also generously shared a free download of the samples and devices they used in the track Sumo Rimi.

Please note: saving of this Live Set may be disabled in some versions of Live

What does your production workflow look like when you two are collaborating? Do the two of you have distinct roles? And how is working/composing collaboratively different from working alone?

Kostas: Usually things kick off after a couple of pints :) To answer your question, creating the necessary space for the two of us to coexist and collaborate went smoother than we expected. Each of us has a very different approach to sound and composition, so it’s amazing we actually managed to find a workflow so fast. A key element to this was that the core body of the work was created shoulder to shoulder, we’d just sit in Mads’ home studio for hours, recording, processing different sound sources, arranging melodies and percussive patterns. It was essentially a few good jams that helped us piece the whole thing together and find the right direction for it. Our roles were quite distinct and I think that’s what helped us move forward. I’m good at coming up with melodies and combining them, somehow I’m always thinking in terms of songwriting. I’m terrible at making decisions though and that’s where Mads’ decisiveness came into play, putting my musical braindump in order and using his technical expertise to bring structure to the whole. Most of the drums and beats were his work too, they magically blended in perfectly with the melodic parts.

What’s a typical starting point for a track? A combination of sounds, a rhythmic pattern, or something more abstract? Could you describe the process from the beginning until a piece is deemed finished? Also, are there any automated or generative processes employed in your productions?

Mads: I guess the starting point is our mutual desire for expression. I’d say our collective standpoint is the aesthetic direction and capturing the right emotion, everything else sort of follows. My viewpoint on electronic music is making new timbre and generating a sound universe from scratch. That involves a lot of experimentation, using things in ways they were not necessarily intended to be used. I wouldn’t say there was a clearly defined trajectory or sequence, sometimes we’d start with a drum beat and sometimes with Kostas playing an instrument or pad sound. Not having a precise way of sequencing things was our aim anyway, just try things out, immerse ourselves in the creative process and make decisions as we go.

Kostas: I agree. We are very close too, which leaves little room for debate. We just understand each other and that’s already half the work.

There’s a very precisely crafted palette of sounds and textures in your music. What instruments and sound generators are you using and what kind of processing are you applying to them?

Kostas & Mads: We both grew up playing loud music with guitars and drums, spending endless hours in rehearsal rooms. Playing in bands came first and shaped our understanding of music and writing songs to a large extent, electronics came later. Having that shared background proved very helpful in working together, especially when combining acoustic elements with electronic ones, we just knew we were speaking the same language. That common ground explains our love for instruments you can actually interact with. For that reason, we used plenty of different hardware synthesizers such as the Polysix, Crumar DS2, Arp X, Korg DV800, Moog Mother and Elektron Machines. We also recorded a bunch of instruments such as an 8-string guitar and a Turkish oud. With regard to processing, we used some outboard gear too ( e.g. a small modular rig, the Eventide H9) however most of the sound sculpting was done inside Ableton using Live’s devices and several Max for Live effects.

There seems to be quite a lot of arrangement going on macro and micro levels. How are the rhythmic and melodic parts played, programmed and then refined? How do you think about and work out the interaction between the various parts of a track?

Mads & Kostas: Everything has a pitch, be it a snare drum or a kick drum. Even the smallest sonic element in a tune has a pitch quality and that’s why it’s important to keep an eye on that. Tuning drums and percussions to match the tonal aspects of your melodies and harmonies was crucial to the process. When it comes to performing an instrument, a guitar teacher used to say “you can keep playing the guitar filling all space with sound, but if you play it like a saxophone, where you need to draw a breath then the melodies and voicing become more humanized”. In that sense, we played all instruments and synthesisers down the lines of making them breathe. On a larger scale, our consideration was to create a narrative and for that you need to understand the dynamics of layering and musical structures to some degree, so you are able to tell a story. There’s great power in silence, in absence of sound. We explored this kind of contrast while making this record. On several levels I experienced Kostas being my perfect opposite creating what I could not, and he expressed similar symbiotic viewpoints throughout the writing process. I believe this is why the narratives and stories materialised in this form.

Despite the fullness of the production, there is a lot of space in the music. Both in terms of reverb and in the sense that each element seems to sit in its own clearly defined space in the mix. How do you go about achieving this clarity?

Mads: Side-chaining and mix compression! Without those, it’d be impossible to achieve sound clarity, given the heaps of reverb we apply to our tracks. The Fairchild 670 came in very handy for mix compression purposes. We also did plenty of dynamic EQing, Brainworx’s DynEQ was pretty helpful there. Since we come from two different musical worlds, we needed to find a way for these two universes to coexist harmoniously. First and foremost we paid attention to panning, giving everything its identity in the left-right continuum. We also made heavy use of Live’s EQ Eight to make sure every single track sits well in the mix frequency wise. We wanted to achieve great depth of field without sacrificing clarity, and so we had to be meticulous about the amount of space each sonic element would take up in the mix.

The Climate Soundtrack: What Does the Future Sound Like?