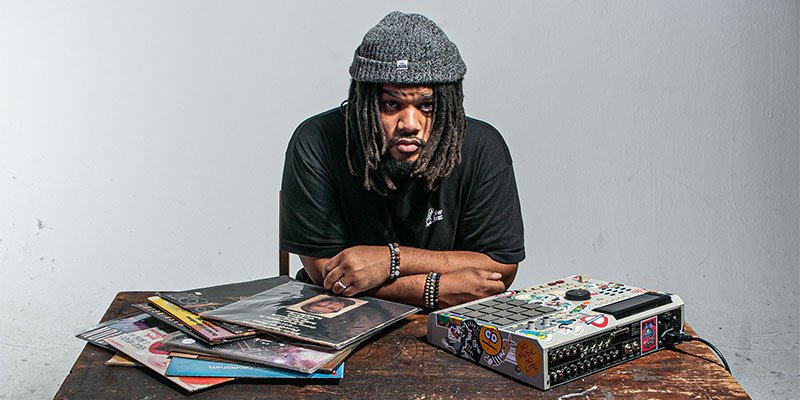 In addition to co-founding the producer collective and beat showcase Controllerise, creating the Slappy Drums sample pack, and building an Instagram audience of over 50,000, the veteran beatmaker has also done stints as a military employee, telecommunications expert, MC, and photographer for Future, Jeezy, and Schoolboy Q.

STLNDRMS’ music career was cultivated during long stints abroad. His first foray into production was nearly two decades ago, when he composed his early instrumentals while living in Italy. A few years later STLNDRMS and his family based themselves in Tokyo, where he landed a music licensing deal for the video game MadWorld and the sequel Anarchy Reigns as an MC named Ox.

Now back in the US, working out of his Atlanta home studio, the years of nomadic crate-digging shine through STLNDRMS’ trippy, slowed-down soul samples and crunchy drum hits. Many of his songs are constructed out of bits and pieces of lesser-known music others overlook, such as rare Japanese 45s and vinyl versions of old anime soundtracks like Lupin III and Cowboy Bebop, along with Tracklib samples, and his staple jazz and soul records.

He often lets the emotion of the song he wants to create guide him when searching for sounds to transform. “I’m looking for tone, texture, and clarity – trying to match the aesthetic I’m feeling for the record,” he says.

“Also, fire loops,” he adds with a laugh.

As for the tools he currently uses to slice up samples, fans of his live Facebook video series Beats+Chill will note that his MPC2000XL has been a mainstay for some time. After years of practice, STLNDRMS’ proficiency with the 2000XL is now a form of automatic recall. “On the MPC, I literally put my hand on top of the record and stop it, take my hand off and grab the little piece that I want and assign it to a pad,” he says. “To build a kit it would take me minutes.”

Many projects like the early fan favorite “lifestyle” and the 2017 album Veggie tacos heavily utilized the 2000XL, Roland SP-303, and SP-404 – a combo he still uses today, albeit in modified form. Chopping up samples in the MPC, STLNDRMS records into an eight channel mixing board for EQing and minor effects, with the 404 providing his signature stutters and dropouts and the 303 adding its characteristic vinyl simulation.

He maintained a fierce loyalty to the MPC/303/404 setup for some time, but a broken MPC forced a change of pace during the making of 2018’s Veggie tacos III. Using Maschine to compose about half the songs on the album, it was around this time that he decided to make Live part of his process.

After initially quitting on the DAW due to a sample importing and chopping method he was unfamiliar with, Live opened many new musical doors once he gave it a second chance. “The flip side of that issue is all the mixing tricks and opportunities I can do for looping and stretching, and a hundred million other things that are available to me,” he says.

Looking back on his early experiences with Ableton, STLNDRMS believes he overwhelmed himself by trying to learn all aspects of Live and Push instead of easing himself into new and unfamiliar territory. “I didn’t understand the program, so trying to learn Push and Live at the same time was really awkward coming from MPC,” he says. “I decided I would learn the program first by itself, just using my keyboard. Once I learned it that way everything made sense.”

Another crucial adjustment was getting the Live mixes to evoke his signature sound. Coming from vintage gear that’s known for imparting a certain warmth on samples, giving Live compositions a similar feel took some time. “That took forever,” he says. “Ableton is awesome because it does not impart any sound whatsoever, it gets out of the way and lets you create. But at the same time it doesn’t have a sound, so you gotta figure out how to create a sound in it.”

After a lot of trial and error, he can now use Live in isolation to get the feel and sound of the MPC by running multiple plug-ins at once – a technique that defies conventional wisdom. “Everybody says not to do this, but I ended up with like 10 different plug-ins on my master bus,” he says. “Once you add them all up, you get a tone very similar to the MPC.”

He also figured out how to expand the possibilities of Live by using his new tool in tandem with older gear. “I get my MIDI Sync for my MPC so I can still chop like I wanna chop,” he says. “Then I get the modification tools in Ableton. It’s the best of both worlds.”

Not content to just link his MPC, STLNDRMS also uses the 303 as a bus compressor through Live’s External Audio Effect device. “I can say, ‘OK, bus everything to 303 from the MPC’ and use that as a mastering tool,” he explains. “The crazy thing is, Ableton is using my 303 like an effect.”

STLNDRMS also finds Live helpful in crafting distinct drum tracks through a rather labor intensive and multifaceted method, though he cautions producers against trying to mimic his process step by step. “Do whatever sounds dope to you,” he says. “Take everything I and anybody else says with a grain of salt. We’re all clueless in the end.”

When he builds percussion patterns he is very specific about his EQ levels, especially with his kicks. “I like my kicks big, so I boost lows 60-70hz,” he says.

Other drum sounds may need an increase or decrease in EQ – or no adjustment at all – depending on the qualities of a given song. Though cutting EQ often creates a more subtle effect than boosting, it’s a technique he likes to play with if the record is too crowded. “Snares I may boost around 150, but I may cut in the same place if the record is busy,” he says. “Hats I don't boost.”

“Make 10,000 beats. I’m 100% sure every answer that you want to know is in that journey somewhere. Just start cooking and you’ll figure all that shit out.”

Like many producers who opt for a more human touch, he generally avoids the quantize feature – though he fiddles with individual notes and drum hits as needed once a beat is complete to get them just right.

Messing with the EQ is a critical part of the percussion process, but simulator plug-ins and additional reverb also play a pivotal role in taking the sound to the next level. “I tend to send the drum bus to a tape sim now,” STLNDRMS says. “I like the warmth. I’ll also add a little reverb on the top of the bus to give a cohesive space to the drums.”

Using Live to play with and build chords is an endlessly fascinating rabbit hole of experimentation for STLNDRMS – one that has added a whole new depth to his sound. “I’ll build a chord progression, then copy that to 2 or 3 tracks with different sounds to build up a bed of sound and I’ll add arpeggiators to give more texture,” he says. “They tend to be on the grid so I’ll shift the MIDI to make them a bit off time. It gives a more musical vibe, more human.”

Just like in the studio, Live is proving to be a game changer when it comes to live performances like a recent meet and greet with Atlanta Hawks star Trae Young. “We did a big thing with Verizon a little while back where they had four or five different painters from the city come out and paint canvases,” he says. “It was like, ‘We want you to make a new beat for each canvas.’”

As creative synergy grew between painter and producer, STLNDRMS seamlessly maintained the vibe, adding and removing samples throughout his set. “I would drop the drums and program some new ones,” he says. “Then they would come in and I would drop the sample and program a new one. Or I could use the crossfader and blend between a sample and the next one and then drop in an acapella on time.”

Now, with events like these raising his public profile even more, STLNDRMS finds a new influx of young producers seeking his council on how to get a foot in the door of the industry.

Reflecting on the path his music career has taken over the past 18 years, his advice is rather simple. “My answer is always the same, every single time,” he says. “Make 10,000 beats. I’m 100% sure every answer that you want to know is in that journey somewhere. Just start cooking and you’ll figure all that shit out.”