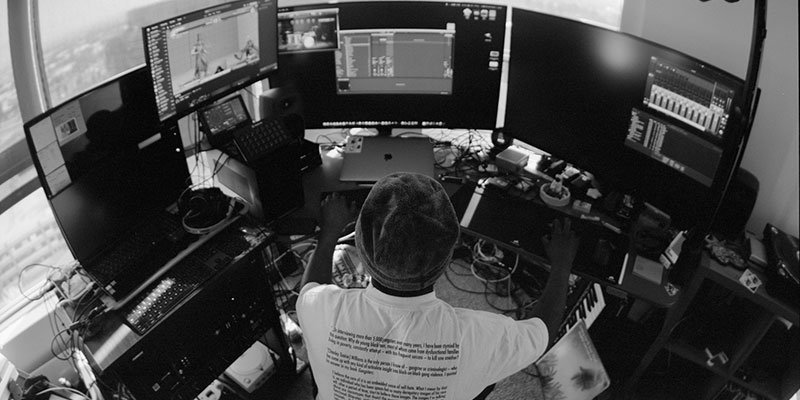 Knxwledge might be the only person on earth prepared for 2020. “Quarantine is regular over here,” remarked the 32-year-old producer over a video call from his home studio. Long before staying inside was a mandate, Knxwledge was streaming it live with Earl Sweatshirt. And before livestreaming was one of the only financial outlets for musicians amidst a global pandemic, Knxwledge was playing Street Fighter and making beats for his audience on Twitch. Starting from his debut album, 2010’s Klouds, Knxwledge’s infectious blend of chopped loops over shuffling drums has brought him from Klipmode fame (his music collective-cum-supergroup with Suzi Analogue, MNDSGN, and Devonwho) to high-profile collaborations with Kendrick Lamar and Anderson .Paak. His sonic palette traverses everything from the gospel choirs of his youth to the street-rap scene in Philadelphia to his all-time favorite video game soundtracks, all while maintaining an unmistakable production aesthetic that uniquely and wholly belongs to him.

Like the kid who mains Sagat, Ableton Live is Knxwledge’s character-of-choice in the beat-making game, and he’s mastered an arsenal of creative techniques that have produced one of hip-hop’s most prolific catalogs in the last decade. We chatted about his strategy in Live, the importance of keeping a laptop in as many rooms as possible, and what advice he would like to give to up-and-coming producers in 2020.

So has the schedule changed at all for you since lockdown, or is it business as usual?

Bro, quarantine is regular over here. I don't know why people is in such a rush.

What keeps you inspired on a daily basis?

For me, I'm just in ‘go’ mode all day long. I mean, of course I have my off days, but I'm always going. Like, what else is there to do? I've been on it, because all the homies… I got the most competitive homies. Like Alchemist and Sam [Samiyam]. If you meet everybody, they cook crazy every day.

A lot of people admire you for the massive output of your catalog. I’ve got to ask – when do you sleep?

I got the wild sleeping arrangement man. It's crazy. And what's fucked up is as soon as I think I'm about to go to sleep, that's when it gets crazy. I got a damn set-up in every room. Just little set-ups – fuckin’ old laptops that I've got and I can still loop shit up on them or whatever. Still got little kits on every one of ‘em. A good 98% of the time, I'm in bed, and I'll just be going through some shit. And I'll end up coming right back to [my studio] and finish the shit up. I got mad laptops that I need to get rid of. They couldn't keep up with your boy.

Going into your process, you’ve talked in the past about the importance of digging for samples as a beat-maker. What do you look for when you dig for samples? Are you looking for music from a specific genre or era, or is it just what you happen to be listening to at the moment?

You can sample anything, so I'm listening to everything. I’ll just grab shit from movies a lot of the time: old Blaxploitation, all kinds of shit. There's shit everywhere if you hear it. And nowadays, it's too much fun shit to work with. You can make shit so interesting with Ableton. That's my favorite part.

Have you been using Live since Klouds?

I think Klouds is a mixture of Live and maybe a few Reason joints. I've tried everything honestly. Cubase, FL, all that shit. Reason. And then I got to Ableton and it was like, damn. I remember me and Ringgo [MNDSGN] figuring out how to do shit in the Clip Mode [Live’s Session View]. And I literally still make beats in Clip Mode. That's why it's so fun, because you can literally make however many beats your heart desires. It’s incredible.

What’s your approach to drums? Do you make new kits regularly?

Nah, I've just had drums forever. All the bootleg single hits that I've made [into] Drum Racks. Drums from the homies, thank goodness. Like Karriem [Riggins]. That's kind of all you need, you know?

Do you mix and master your music in Live?

Hell yeah. It's simple to me. I love it.

Your music has a very identifiable sound. What does the mixing process look like for you?

When I first started sampling, the first kind of sample shit I had was my dad's [VHS] tapes that he brought from Jamaica with him. He also had a bunch of cassette tapes, 'cause the whips had good cassette players. So I would take those tapes and my dad – I don't know if he brought this thing or he just had it here – but it was a big ass tape player, and on the front of it, it had a damn pitch wheel. There was a volume and then there was like a pan wheel or something. And, I don't know, I always used to record. I just always loved the sound of tapes. You feel me? Who doesn't love the sound when you put a fuckin’ VHS in and press play, how the sound’s warped? That's just too crazy!

So there's just a bunch of UAD tape emulators. There's countless on there and then Waves plugins, they have countless too. Reel-to-reel shit, all kinds of emulators. And then just light EQs. Super light, like literally EQ Threes. That's pretty much everything. I barely use EQ Eight. I do have more [EQs] when I'm mixing, but when I'm doing samples, it's just EQ Threes. So ill. I love the built-in shit, man. That shit is my favorite. I use that shit so often – the limiters? I don't use no external limiters or none of that shit.

I got a Drum Rack. I got two empty audio joints and a Simpler. That's pretty much it.

You've clearly had a lot of success in your career. If you could give advice to an up-and-coming producer who's trying to find their own voice – their own sound – what would you want to say to them?

You don't have to say that!

No, no, it's just my favorite. I mean, use whatever you wanna use. Opinions are definitely just opinions, you know? Being productive and doing things because you love them is totally different. So I do this because I love it. I don't get caught up with a few tracks or projects or whatever. Personally, I've had a strong work ethic when I was young. I worked a lot when I was young. We all gotta pay to live out here, you feel me? So I just work my job like a regular job. I wouldn't be in this position to begin with if I didn't share that shit. So I'd say to just share when you're ready. Just keep being inspired and keep stacking stuff. I always used to call it stacking. I still stack beats that, eventually, I'm just over and I share. Just keep going and make sure you like it instead of worrying about anybody else.

It's like when Kanye said, “lock yourself in a room…”

'Cause it's been funny times in my life where that shit has mattered. Having beats that randomly touch people, you know? I remember being on tour with Anderson [.Paak] and Thebe [Earl Sweatshirt], and going to 9th Wonder's house and we sat down to play a few things, and this fool would play shit for hours and hours. I thought to myself, “damn, what if I just didn't have all these beats? What if I just settled on, you know, a few beats that I was like, yo, these shits hard, I'm gonna just ride with these shits.” But you gotta have shit. It’s kinda no sugarcoating working. Everything can't be that fun, you feel me? I mean, obviously making music is fun all day long ’til you get tired or ‘til your ears don't work anymore. But it depends on how much you love it. You can see how much I love it, dawg. You can see it. Go look.

To keep up with Knxwledge’s relentless love of music-making, check out his Bandcamp and follow him on Twitch.