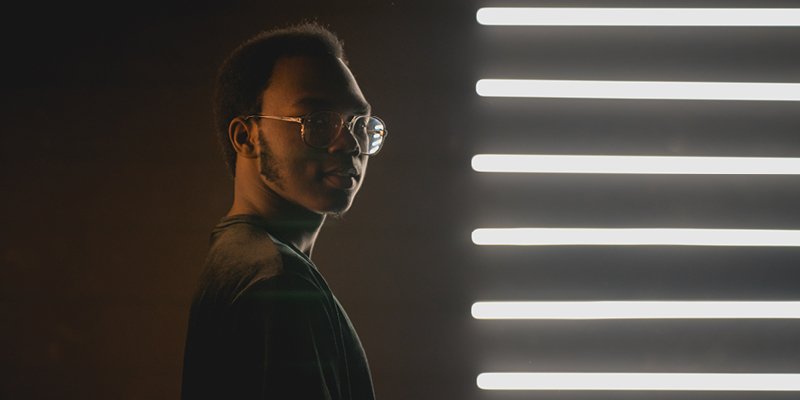 “How I look at musical talents is almost like X-men” says Justus West when referring to the musical superpowers of the people he considers genius. “You can almost trace it back to when they first discovered their power, and it’s always some traumatic moment in their life. They set off a fire blast by accident and light the whole school up or something crazy. I feel like music is the same way. A lot of times you know you have a musical skill, but you don't realize the full force of it until something happens.”

The metaphor almost writes itself. Justus had a near death experience when he was bitten by a brown recluse spider at the age of 16, barely surviving a month-long ICU stint. Less than one year later, he entered and won the Guitar Center OnStage with Vince Gill contest. As you might imagine, the next thing he knew he was on stage with Vince Gill, and moved to Nashville at the artists suggestion.

The rest is a vortex of opportunities and gigs. At the age of 21 Justus has toured, written and/or produced for the likes of Mac Miller, Ariana Grande, Roddy Rich, Future, DJ Mustard, Jazmine Sullivan, Chris "Daddy" Dave, Herbie Hancock, Robert Glasper, Timbaland, Ty Dolla $ign, John Mayer, and more. He’s the youngest member of 1500 or Nothin’, has been nominated for a Grammy, and has lived and worked in Nashville, Atlanta, and LA. He recently got married and moved back to his hometown of Kansas City, Missouri, where he’s hard at work continuing to expand the edges of what he’s capable of.

“When I started doing major gigs, I would just be quiet and listen. If I didn't know an intro or an outro, I’d just make up some technical issue with my pedal board, listen through a few times as they're playing it and do my best to get in line. A lot of my early touring days and show days were a heck of a lot of guesswork, that's for sure. And I just let my personality do the rest.”

West also notes these experiences, which rushed him towards independence at a young age, helped him realize his true potential. “When I first left Kansas City, I wasn't even really fully producing yet. I wasn't really making a lot of beats or writing songs... I was just wanting to be a guitar player. I was couch surfing and all that stuff. You have a lot of downtime, so I started nurturing my creativity.”

Just a few years later, West has accumulated “thousands of audio files” which include beats, songs, and scores he composes to YouTube videos for fun. He also taught himself 3D rendering, CSS and has been moving more towards visual arts. “One thing that I found is the more things I try, the more things I'm good at. And that means that those things are in me somewhere, I just have to nurture them. I keep smacking on it ‘till I break some ground.”

Time is of course a constraint when it comes to satisfying every creative urge. With his career in a vibrant, ever-evolving place and so many other disciplines he wants to explore, West’s main challenge is balancing his interests. “I always feel like something is lacking, you know? It's like a never-ending itch, and no matter how many itches I scratch there's always a new itch. I've been trying to make a daily schedule of animate, draw, practice, create. I'm up for 15 hours a day, I should be able to do all of these things a little bit every single day.”

“People equate work ethic to their own personal self-worth and value,” he adds. “And then if it drops, you feel like you're not as good. And that was one thing I went through. I felt like, ‘Oh my gosh, I'm only writing five songs a week now. I was writing five songs a day. What am I doing?’ But as much as I love creating music and as much money as it could possibly make me, if my life isn't balanced, I'm gonna suffer in some areas.”

By making sure he has space and time around his creative endeavours, West re-centered his work so that the moments he sat down to create were genuinely treasured ones. In the past he would sometimes fight to come up with the next idea, building up a negative connotation with creation. “Creativity can become your frustrated place instead of your safe place,” he warns.

The great benefit of West’s unrelenting appetite for new creative enterprises is his ability to adapt to a wide range of tasks. From learning guitar by breaking down specific albums and practicing them by ear to re-programming and re-coding his computer, his approach is to boil these areas of interest down to their essential core, assimilate them into his work and see what fruitful combinations could be found between disciplines.

This ability to see things as pieces and parts has paid off. West’s sound and abilities are wide ranging as a musician, making him the choice person to call for certain gigs. “I feel like sometimes what I am is an expert parrot,” he muses. “I repeat and regurgitate stuff I've heard before, and then I mix things, and that's what starts to create these weird, complex combinations.” Once he hears something, it becomes a part of his tool set and he can pull it out and combine it with other sounds, textures and genres on the spot. In one guitar solo you might hear metal licks, BB King, John Mayer and a country twang, all sculpted together into one.

The innate ability to deliver what other people want has split his career into two areas; the sounds other people want him to make, and the sounds he makes for himself. His solo career lives in the ambient, indie singer-songwriter world, while much of his mainstream work is in the hip-hop and R&B scene. This duality is the thing he struggles with most in his career.

“How I look at it is like two supercomputers – you have two different ports and you have to invent a cable to connect the two of them. The most difficult part for me has been marrying the two worlds and finding the balance on the business side. Musically, I don't feel like I struggle as much, 'cause even when I struggle it's always about just pushing that extra mile. But definitely the difficulty always lies in the business.”

“I've had deal offers and either people want me to be this musical genius on a mountain, and I'm not gonna make no money doing that, or people fully want to just popify me out. ‘Cut your afro off. Don't play guitar at all. You don't even have to make the beats. We'll get you beats and put you with a writer.’ That's horrible. I don't want to do that.”

He cites his experience in the music industry as having this same sort of duality. He speaks with reverence about independent artists such as Bon Iver, Bibio and Unknown Mortal Orchestra for their detail and creative freedom, but he’s also gone into major label sessions where a team of engineers and writers are on hand to execute the commercial aims of a track with calculated precision.

Justus’ mother, writer Charmelle Cofield, has penned songs for the likes of Whitney Houston and Beyoncé and has set the tone for the type of career professional he wants to be. “Both my mother and father have been in the music industry. My dad hit the drugs pretty heavy, so he kind of spiraled out. My mom switched from music to more entrepreneurial stuff. She started a business, and seeing her do that helped me realize that while you love music, nurturing these other ideas is important.”

Now back in Kansas City with his wife, “where seemingly nothing would happen,” West’s stretching back out, physically and musically. “I've actually placed five or six beats on pretty major artists. And it's cool because now I actually have the space to do me. Living in apartments in LA, I can't have a giant desk with fake grass. I have 20 guitars in here, a Fender Rhodes, my Prophet, two drum kits, a couple of basses... I couldn't do this in LA.”

Justus West onstage with 1500 or Nothin’ at Loop LA: