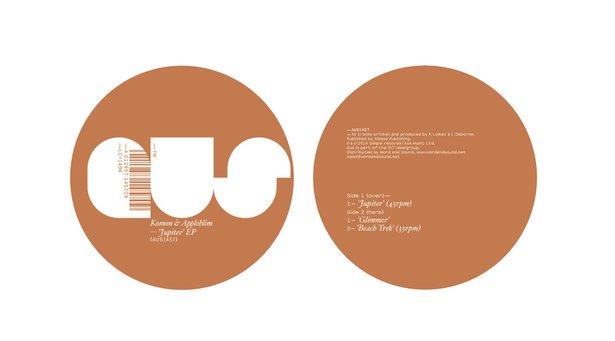 Starting out with a remix for Sideshow, Laurie Osborne aka Appleblim and Keiran Lomax aka Komon (or Komonazmuk) have forged a collaborative partnership through a series of lauded releases. Most recently, the duo released the Jupiter EP on the respected Aus Music label, co-run by long-term friend Will Saul. We spoke to Laurie and Kieran about working together in a studio, the specifics behind Jupiter, and how having a collaborative partner can help in finishing a track.

When you work together, are you usually in the same studio, or bouncing sets back and forth?

Keiran: Sometimes we might even take a couple of hours before we even switch on the DAW meanwhile we’ll be playing tunes to each other and kind of getting into the same vibe.

Laurie: We’ve been friends ever since I first moved to Bristol, so it’s really been a sort of mates thing first and then the fact that we’ve had good results every time we’ve gotten into the studio together. Our remixing just really worked together, but then after we had done four or five or so and gotten really good results we thought maybe we should actually just try and make some ourselves. It sounded fun and we had never really done that, it had always been a job, like this is the remix, let’s get it done. So then it was like: ‘wow, can we translate this into being in the studio and starting a track from nothing?’

How does it work to come up with ideas when you’re together?

Keiran: With the newer material it’s probably down to tutorials, and getting the Push and really going in with the Max for Live things. I’m learning every time I’m doing something so once I make a channel strip or something, I want to show it to Laurie at an early stage.

Laurie: He’ll say, “I’ve got something cool here, I learned this the other night so let’s try and start with that.” One thing we did recently started off from generative music patches that Keiran had learnt how to make...

Keiran: One note is generating 24 notes, all in scale.

Laurie: I hear something like that and I think “wow, that sounds crazy, I’m really interested in it, I never would have been able to do it myself” and that will become the starting point to a track. So we’ll go -- let’s put a tempo to that, let’s put a beat to it.

You used Operator and Analog on Jupiter, right?

Laurie: Yeah, there’s quite a few things we had gone back to in the arrangements now seeing like ”Oh wow, that was Operator and that was Analog”. I always forget what we do and so it’s like, “what was that little thing there?” And you think that sounds truly analogue and you look back and realise that’s Operator with a Grain Delay and something else. Those are bits people are noticing on the EP and going: “oh yeah, that’s definitely the Roland Jupiter there,” but it’s not.

I’m starting to use Ableton but I’ve always struggled, so I’m still trying to learn that, but I’m always totally blown away by sitting down and watching what Keiran does and learning a couple of bits here and there.

Keiran: You can navigate the whole arrangement, you can cut and paste, you can do all those things no problem.

Laurie: We can sit there and we’ll jam musically for a while and then we’ll start editing the clips or whatever. That’s really where I need Keiran to just be there and take the ball and run with it and pass it back - you know what I mean? Otherwise I’d be sitting there, going around in a circle, whereas Keiran just goes on to the next thing, getting the structure going.

[playing a track from Jupiter in the background] Is this one of your FM Kicks?

Keiran: Yeah the kick drum is completely synthesized from Operator, and all I’ve got on the end of that is a Dynamic Tube. 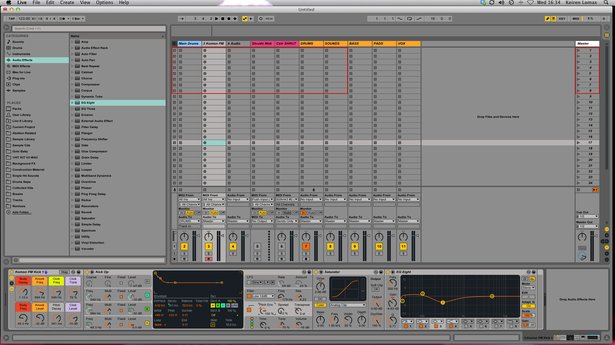 There’s what sound like a few layers of synths on “Glimmer”, from Jupiter. Can you walk me through what’s going on there?

Laurie: We started probably with the Arpeggiators. That’s a thing we’ve been really enjoying using a lot, the Scale and the Arpeggiator and stuff like that in Ableton. I’ve always been obsessed with arpeggios, but I’ve never really known how to do them properly and just sitting with Keiran, we’ll get one rolling in one chord and then we’ll add another one that’s pitched up, like 7 semi-tones over the top of it.

Even though there’s quite a lot going on, I find Keiran’s skill with EQing gives it all a space that it can sit in. It could get a little bit messy or over the top, but I think everything has got its space here. For me, I really love that track because it feels very clear and separated… you’ve got shiny synths in the middle, you’ve got the click-y percussion at the top and then you’ve got real fat, round bass at the bottom. In the end, hopefully, it doesn’t sound cluttered or messy.

Keiran: Nice for the dance floor, really. Everything has its spot. Even looking at the drums…whereas on the last track we had probably around eight or nine tracks of drums and they would even have sort of drum racks inside them with multiple channels – here I can easily see four channels of drums. Two of them are percussions. Three channels of bass, but two of them are sort of “respaced” sounds – resampled and layered.

You’ve both produced music that fits with a number of different styles. When you set out to collaborate, how do you get on the same page musically?

Keiran: We will get some tea on, and we’ll start playing some tracks on YouTube, things we’ve been buzzing off recently. It’s about getting into the same kind of vibe that will set you off and start you thinking “that sounds like a weird sort of synth, let’s have a go at that” – and that’s the starting point.

Laurie: We share our influences in terms of the music and the history, playing together since we met each other but also prior to that. I was a massive jungle and drum n’ bass fan and so was Keiran. He was making that music, whereas I never have, but we understand the sonics going right back to house music and rave music, which is what we grew up on. Living in England and being into any form of dance music, you’ve instantly been opened up naturally to these things. I can say to him: “It’d be really nice to hear some mad Reese drum n’ bass bass sound,” and literally within five minutes Keiran will have worked it out and made exactly what I was thinking.

Keiran: And you know, in the first one or two days of putting a track together, we fire in the channels fast and furious and we don’t worry too much about EQ or anything. If anything needs to be high-passed we’ll do that but we’ll just keep adding and adding, trying to get something done as quickly as possible. But then the next few, I’d say six days after that are more about getting rid of stuff and chopping down.

As a producer working solo it’s always hard to know when something is finished. Do you find that it helps when you’re collaborating, to know when a track is or isn’t finished?

Laurie: I think we’re getting better at it, but personally that’s something I struggle with. Keiran is definitely much better at starting and finishing music. I’m bad at starting it and I’m bad at finishing it. Keiran will turn to me and say, “this is it now, these are the elements we’ve got, that’s all we need for a track.” Whereas I would probably be sitting there, thinking we should put in another little stabby riff over the top or that there’s space for another melody. But no, we’ve got what we need. So yeah, for me personally, it really helps having Keiran to just bounce ideas off and go, “yeah, that’s good,” or “no, that’s bad.”

Keiran: With finishing the track, once we’ve switched off the monitor and we think we’ve hit the mixdown stage, if we’re playing it from start to finish and we’ve got our notepads here, if we don’t really write anything down, it just plays from start to end, there’s nothing jumping out, there’s nothing annoying, then it’s done. We do always try to get a bounce at the end of the day for assessment in the kitchen or wherever you are and give you fresh ears for the following day.