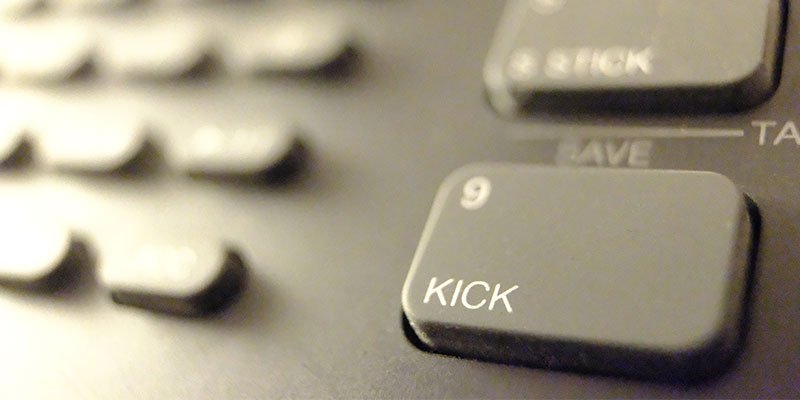 If you listen to electronic music – especially dance-oriented genres – then you’ve felt that moment of being one with the kick (otherwise known as the bass drum). More than just the shock of a beat drop, there’s that moment when your ears and body just lock in with the pattern of the kick drum. Whether it thuds, pounds, stabs, or rumbles, the kick directs you when to swing, when to jump, when to nod, when to throw your hands up in surrender.

But what is it that’s so magical about those kick sounds, anyway? Where do they come from? How can you maximize the impact of the kick in your own productions? Here, David Abravanel gives a brief overview of the sonic history and DNA of the electronic kick.

The electronic kick started as an attempt to emulate an acoustic kick, so it’s worth looking into the different components of a kick drum sound:

• The Attack: this covers how quickly the kick comes into being – whether it’s a sharp “ping” or a gradual bassy rumble. The attack is the transient (percussive) element of the kick, and thus a good attack is essential to having a kick that sticks out of the mix.

• The Body: After the attack, we get the bassy weight of the kick drum. If the attack is what calls your attention, the body is what reaches out to your soul (and butt).

• The Tail: The tail or decay can just be a short part at the end of the body, or it can be the signature for a kick. In a longer 808 kick, for example, the slowly decaying tail is its essential hallmark.

As you can hear from these examples, it’s possible to get radically different examples from the same basic sound design and shaping tools.

The first drum machines were more “machines” than drums - essentially primitive synthesizers that focused on repetitive rhythms. Generally considered to be the first ever instrument that can be classified as a drum machine, pioneering electronic instrument inventor Leon Theremin’s Rhythmicon from 1931 bleeps (and whirrs) for itself:

The Rhythmicon as demonstrated by Andrei Smirnov at Ableton Loop 2017

Later innovations fleshed out the percussive character, but still things weren’t exactly kicking yet. The namesake of a single by Gorillaz, the Donca Matic was in fact the first product ever released by Korg, circa 1963:

It bears mention that these machines had pretty narrow intended uses at the time. They were essentially augmented metronomes, intended to provide accompaniment for musicians practicing or recording demos, or for organists in tight spaces.

Kick Into The Groove

The history of music technology is riddled with instances of accidental or unintended use turning into new forms of creative expression - from torn speakers birthing guitar distortion to the limitations of digital synthesizers and samplers opening the concept of glitch music. Like other pioneering works, the first pieces to embrace drum machines on record were no less intriguing. From Stevie Wonder to Sly and the Family Stone to Iggy Pop, certain forward-thinking artists gravitated towards drum machines specifically for their metronomic, machine stiffness.

Donna Summer - “I Feel Love”. Ironically, aside from Summer's vocal, the machine-like kick is the only non-electronic element of the song.

The artists who really pushed for electronic kicks as we know them today, however, were mostly making disco. Donna Summer’s creative partnership with producer Giorgio Moroder resulted in timeless music that still regularly appears on dancefloors today. With songs like “I Feel Love”, an inhuman-sounding pulse encouraging people to dance was established. Outside of disco, pioneering industrial provocateurs Throbbing Gristle found their own bliss in an electronic kick:

Throbbing Gristle - “Hot On The Heels Of Love”

Meanwhile, New York punk misfits Suicide took the organ & drum machine formula of many small-time 60s and 70s entertainers to a sped-up, minimalist extreme, creating a proto synth punk anchored by the electronic kick of the Seeburg Select-A-Rhythm run through pummeling (and cheap) distortion and amplification:

If you’ve listened to any hip-hop, techno, or house music since the 80s, then you’ve heard the sounds of some now-legendary drum machine kicks. These kicks originated in the 80s, when a new kind of electronic kick emerged.

No kick is more famous or ubiquitous than the one from the Roland TR-808. First released in 1982, the 808 was a successor to previous Roland machines such as the CR-78, which had mainly been marketed to organists and songwriters producing demos who didn’t have a session drummer available.

Some famous patterns on the Roland TR-808.

One listen and you can tell that the 808 was not a particularly apt replacement for acoustic drums. But the alien sounds of the 808 – including that monolithic, thuddy, air-pushing kick – made it an iconic instrument. The 808 kick is so legendary that multiple hardware and software attempts have been made to recreate it; don’t miss our own roundup on 808 bass drum techniques in Live.

As mentioned above, the 808, while sounding fuller than the Doncamatic, was not a replacement for a drummer.

First introduced in 1983, the TR-909 was Roland’s next stab at an electronic drum machine. With primitive samples filling in the cymbals, the 909 also featured more attack and depth to its (still analog) kick. A staple in house and techno, the 909 kick thumps hard, and plays very well with distortion.

As you can hear, the 909 kick has a tougher attack and body than the 808 kick. The 909 kick cuts through a mix more, while the 808 kick is booming and bassy. Given this, it makes sense that the latter works so well with trap beats, where hi-hat trills and sharp snares fill out the mid-range and high frequencies, leaving room at the bottom for the 808 to fill out.

Of course, kicks don’t end in analog. So the legend goes, after professional musicians sold their 808s and 909s to second-hand shops (where aspiring house, hip-hop, and techno producers snatched them up), those same professionals invested in early sample-based drum machines. While the samples originated from acoustic playing, the sounds - run from early EPROM chips with low bit depths and sample rates - had their own electronic edge.

Prince was an avid user of the Linn LM-1 - some of his famous patterns are recreated here.

If you want to run some authentic LinnDrum-era processing on your own drum samples, Ableton co-founder Robert Henke has generously shared a free Max for Live device, Microdrum.

Of course, digital had more to offer kick afficionados than just memory. In fact, a little bit of frequency modulation can add a great extra element to a kick, and help it stand out and define a track. When it comes to FM percussion, there’s perhaps no greater champion than Autechre – check out the crunchy quality of the digital kick and perc sounds in “Tilapia”:

Mixing Kicks with an Expert

No matter whether you’re synthesizing or sampling, using analog or digital sources, you need your electronic kick to sit right in your mix. To learn more about this, we got some advice from Kevin McHugh, principal mixing and mastering engineer at Valence Studios.

EQ and Compression are two of the most common effects applied to electronic kicks. “A well-constructed kick should not need much EQ,” says Kevin. “Compression is, however, a crucial component to most kick sounds in electronic music. Unfortunately, compression gets treated as a "loud button" rather than what it really is - a tool to enhance and control different elements of how a kick behaves in a mix. A compressor can make a kick more dynamic or more flat, it can emphasize the attack or the decay, it can add harmonic distortion or clean it up. Understanding the settings of a compressor and how they relate to the makeup of your kick can transform your mix completely.”

Two common complaints about electronic kicks in a mix are that they either aren’t “cutting through” or lack “weight”. Kevin addresses both:

Cutting through: “Rather than focusing too much on typical synthesis structures like ADSR, it's sometimes better to think about three important components of the kick: the transient (the 'click' at the attack), the envelope (the descent from the click into the 'thud') and the decay (the 'boom'). When a track isn't cutting through a mix properly, it's usually because one of these three components is not in proper balance with the other elements of a track. Maybe the transient isn't bright enough, so it gets lost. Or maybe the decay is too long and it muddies the low end of the mix. When a kick needs to come through, it comes down to adjusting one of these parts.”

Weight: “’Weight’ in a kick can usually refer to the envelope or the decay. Those usually represent the lowest frequencies and loudest moments in a kick. Usually the best way to add weight to those areas is to start the envelope from a lower point, and get to the decay quickly. Obviously a long subby decay will feel ‘heavy’ but if it doesn't have the ‘thud"’ it will just be a warm bassy blob.” 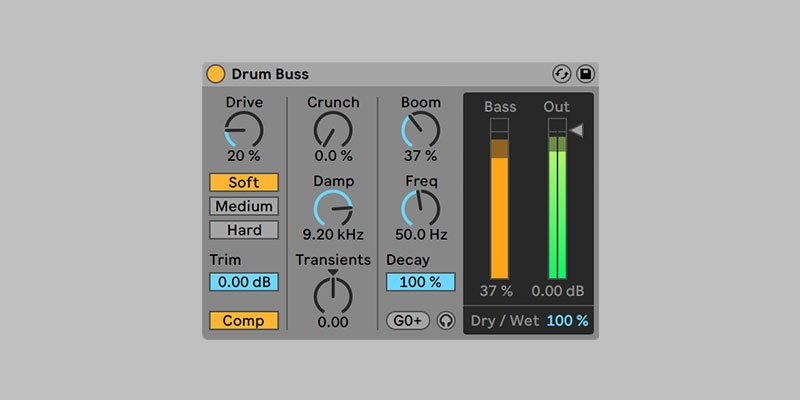 To Tune or Not To Tune

If you’ve spent any time around production forums – like ours – you’ve probably heard something about tuning kicks with the fundamental frequency of a bass line. “This is a super subjective choice,” says Kevin, offering some further explanation: “Humans have difficulty distinguishing pitch below 60 Hz, which is where a lot of kicks have their fundamental decay. Some tracks can use that frequency to function like a note in a bassline, and therefore it needs to be in tune; others simply need a thud in the right place to keep the rest of a track's low end moving.” Make your own choice, but watch out for things getting muddled in the sub frequencies!

Lastly, some tips for the road from Kevin McHugh. After I asked him about any particular tricks he had to recommend for electronic kicks, he delivered this bit of knowledge:

It sounds corny but as time goes by, I keep shedding the "tricks" and specific gear and focus more on developing and using my ears. Fancy expensive speakers are useless in a room where they can't be heard properly, and clever mixing tricks won't yield results unless they're based on thoughtful listening to the material. A kick should be one chess piece on your board. It's a singular player, so it has importance, but it only works in concert with the other pieces. Learning how it moves and ways to implement it strategically will make your game far more interesting.

Now that you’ve learned a bit about the history of electronic kicks – as well as how to make them and mix them – it’s time to work on your own tracks. For inspiration, grab a free set of 30 kick sounds in two Drum Racks. All sounds were made with Ableton devices including Operator, Drum Buss, Saturator, Redux, Dynamic Tube, EQ Eight, Delay, and Utility.

If you want to get even deeper and check out some inspiration for your own kick drum synthesis, you can also download a Live Set featuring the the synthesized setups for all the sounds - Live Suite 10 required:

Made in Ableton Live: Keychee