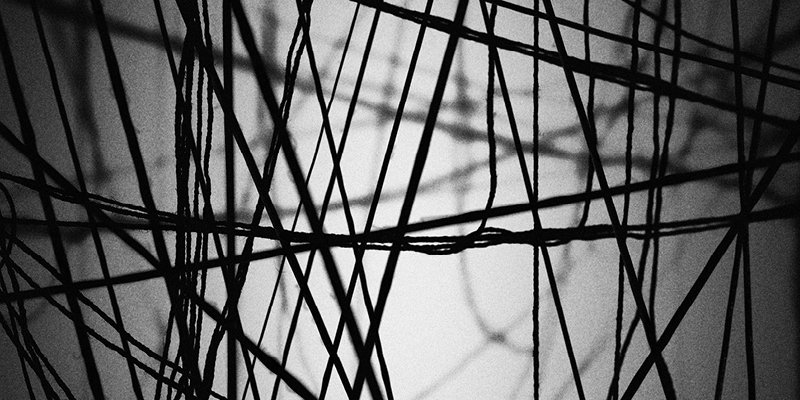 Drones have existed in sound-making for centuries. On a basic level, they’re just long-held or continuous notes and tone clusters, but the belief that these sounds hold some transformative power spans communities, continents and generations. Today, drone-based ASMR video playlists are advertised as productivity hacks, while traditional sound meditation practices such as gong baths have seen a significant rise in popularity. The many branches of drone as a genre of music can launch a listener into a meditative state – even a particularly abrasive noise concert is said to provide comfort to an audience in search of catharsis.

Published earlier this year, music writer Harry Sword’s Monolithic Undertow took readers on a journey across the history and cultural context of drones in music and the world. In the book, he suggests that the human attraction to persistent noise begins in the womb. “Bodily sounds – the rushing of the blood, the beating of the heart, the gurgles of the digestive tract – are not merely perceptible to a foetus in utero, but heard, loud and clear.” This gestational soundscape can register as loud as 88 decibels, and might begin to explain why so many of us find serenity in drawn-out tones.

The immersive potential of the drone is harnessed in Drone Lab – a collection of tools and sounds created for Live 11, designed to let you play with momentum and dynamics, explore and improvise with microtonality, and even practice meditation and sonic healing. Here, some of the Pack’s contributing artists explain the methods and intentions behind their work.

“Drone is an ancient concept and tradition, but we hear drones all the time today – our present is filled with the drone of industrial noise. I think bridging that connection is crucial,” explains composer and producer Ami Dang. Ami grew up in a Sikh-American household in Baltimore where drone-led devotional music could often be heard playing on the stereo. Now, she fuses sitar, voice and electronics to create ‘East-meets-West, ambient and beat-driven psych’.

Ami’s primary instrument, the sitar, is staccato by nature. But in the Indian classical tradition, the plucked instrument is often played over the drone of the tanpura – an overtone-rich, fretless, four-stringed instrument responsible for the long-held bass notes that determine the music’s harmonic foundation. As a solo artist, Ami uses the Raagini Digital, an electronic version of the tanpura that’s popular for its convenience. The drone is easily set and changed, producing a pitch that can be used for tuning, improvising and performing over. It’s also a good way to get into a musical headspace – “Sometimes I’ll switch it on while I’m cooking dinner and I’ll sing along to it. Or the drone will just be present in the house, which is nice.”

In Drone Lab, you’ll find a Rack that makes use of samples of the e-tanpura, alongside individual, processed recordings of its output. Ami also recorded a harmonium, making full use of its microtonal range – while western harmoniums can usually only play the chromatic (12-tone) scale, modified harmoniums can play all 22 shrutis (microtones) common in Indian classical music.

For recording the sitar, she opted for untraditional methods, employing an EBow to draw longer sounds from the instrument. “I tried to get these gritty, noisy artefacts, attacking the strings a little more harshly, or softly, or playing with the bowing speed to slow it down and draw it out so you hear more artifacts when you play.” A dilruba, which she borrowed from her mother, was subjected to similar treatment.

In passing, Ami touches on a notion that’s found in many Indian religions, and is often referred to by the Sanskrit expression Nada Brahma – most often translated as “sound is God”. This is the idea that the divine is found as sound waves in the vibration of the universe itself. The musical drone can be understood both as a depiction of this sacred cosmic din, and as a way to connect with it.

The sounds of the universe continue to manifest as inspiration in contemporary work. William Basinski’s 2019 release On Time Out of Time features a ‘recording’ of a celestial event that took place 1.3 billion years ago – the collision of two massive black holes, captured by the MIT- and Caltech-operated Laser Interferometer Gravitational-Wave Observatory (LIGO). Basinski’s silken sounds transform this physically and temporally distant event into an epic love story.

William Basinski – “On Time Out Of Time”

ModeAudio’s Niall McCallum took inspiration from Basinski for his work on Drone Lab. Alongside a bank of full-bodied basses, radiant atmospherics and heady textures from the ModeAudio sound library, he also put together a set of Instrument and Audio Effect Racks, to provide additional precision and control for sculpting sounds.

For making Instrument Racks, Niall says choosing the right instrument has to come first. “[Live’s] Wavetable does a really good job of just giving you exactly what you need. It’s good for movement – with two detuned voices, you can get a wobble that’s also great for this kind of sound.”

When working with drones, he points out, it’s important to think about the space the sound inhabits. “I love reverb’s ability to situate a sound within some kind of context, whether that’s virtual or real.” Giving one sound the space to be heard within the frequency range can give a feeling of abundance through simplicity. “I always find one sound and a huge reverb applied is more than enough to hold my interest as a listener.”

Methodical at every stage of his process, he’s careful to avoid any accidental changes or disruption to the signal chain. “I’ll stack plug-ins like there’s no tomorrow. I get a bit paranoid about going into a plug-in I’ve already set up and ruining what I’ve done. If you’ve got an EQ set up right, and then you add effects, it’s going to change the signal in some way. So actually, changing that original EQ is going to affect how those plugins are added after.”

Niall tackled the project with two distinct categories of drone-inspired music in mind, and channeled each into its own Improvisation Set. “One is the lighter, more ethereal side, as exemplified by people like Stars Of The Lid. Their stuff is soothing, warm and lush. It’s orchestral, and it’s just like a warm bath. The other side is the sound of the likes of SUNN O))) – gristly, dark and distorted.”

“The intention behind these Sets was to be more than just a showcase for the presets – rather, they are about building something like macro instruments in themselves. You can load up these sessions and hit play, and they’ll create new sequences in a generative fashion, because each part will switch between the various clips in a more or less random way. So you could, in theory, listen to them for quite a while and not hear the same thing twice.”

Providing a starting point for working in the moment was a primary goal in the development of Drone Lab. Ableton Packs Team’s Sofia Nicolas Melero explains, “The Pack is designed to let you work with beautiful drones, but I think the biggest aim was for people to use it for improvisation.”

Emergent Planes is Sofia’s own creation. It’s designed to be played through, experienced, and built upon gradually. She recommends working slowly through each channel, focusing on the smooth introduction of one element at a time. “It really helps if you can focus on just one single thing – it’s about very small changes to the sound. It’s like a meditation practice. Slow down, and bring attention to the moment.”

Another way to stay in the zone is to avoid getting stuck in technical considerations. Many of the Racks’ Macro Controls have been given names that reject concrete technical descriptions in favor of more evocative names that cast a bit of mystery over the exact parameters that lie behind them. You can turn up the ‘Parallel Universe’ and shift the ‘Water > Air’ control, but to find out what that does, you have to listen. Sofia explains, “When we have a function, and we know technically what it is or what it does, we tend to predict the change that we’re expecting. We might even hear some things that aren’t actually happening. Sometimes, the more technical we are, the more we tend to listen with our head.”

Use Harmonic Drone Generator, an eight-voice Max for Live synth created by Expert Math, to create your own drones and experiment with harmonic intervals in equal temperament and just intonation

“Drone Lab was an amazing platform for me to experiment with a lot of these metaphysical ideas that I’ve been trying to ground into a shareable, usable format,” explains producer and sound artist Xosar, whose specialist interest in the field of sonic healing has taken her research and creative output through a series of transformational wormholes.

Comprising seven Instrument Racks and over 100 Samples, her work for the Pack was based around an underlying theme of expanding people’s consciousness about sound’s ability to influence reality, matter and healing.

Using an Ambisonic microphone, she sampled her collection of tuning forks in a special interval set known as the Solfeggio frequencies. Set 111 Hz apart, each frequency in the series represents a different cleansing or healing force for the body and mind. “These samples are there so people can infuse healing frequencies into their music, to create some coherence and structuredness. Even if it’s just one layer in a wider musical context, it’s like a vitamin – a little healthy nutrient.”

As evidence for the healing properties of these frequencies, she points to a set of phenomena known as cymatics – where sound waves are shown to displace particles into geometric shapes. “Sand starts forming different patterns depending on what frequency is played into it. There are some frequencies that don’t render any sort of geometric formation, but there are certain frequencies that somehow are able to make the sand render into a perfectly precise geometrical formation. What this indicates is that specific frequencies are restructuring matter from a very fundamental level.”

Beyond the healing power of the frequencies themselves, she makes a point of adding some intentional energy of her own. “When I’m doing the recording, it’s important for me to be in a particular state where I’m infusing the recording with intention. Because on a quantum level, I believe that intention is going to be infused into every sample.”

Microtonality is another of Xosar’s special areas of interest. Influenced by the work of music theorist Erv Wilson, she used Drone Lab as an opportunity to share her research on alternative tuning systems. Discovering Wilsonic, an iPad app for exploring Wilson’s work, she says, was like waking up to a new aspect of reality.

“These tuning systems are essentially a series of mathematical relationships that are based in either geometrical shapes, or just any sort of complex mathematical relationship series. Wilson used advanced mathematics and vector calculus to map each point of the shape, or to match a formula to derive each point on a 3D plane and convert that into numerical values, which are then converted into a tuning system.”

X3RKABA is Xosar’s Instrument based on Wilson’s Star Tetrahedron tuning system, mapped from a 3D model of two intersecting pyramids. This shape, also known as the merkaba, is believed to have powerful esoteric properties. For Xosar, infusing these properties into her music, and sharing these concepts with others, can hopefully lead to heightened intentionality and wider adoption of the belief that we can use sound to influence our reality.

“Ultimately, one of the messages I really want to teach people is that they have the power to infuse their own intention into whatever it is they create.”