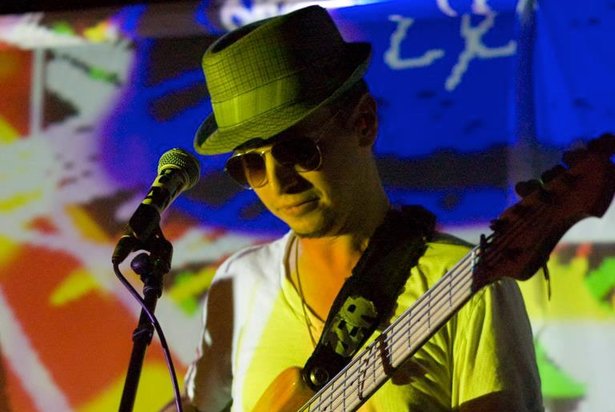 Coming from a background working with hardware samplers and collaborating with an impressive selection of New York-based musicians, Dan Freeman is a man with a wealth of experience to share. Now an Ableton Certified Trainer and a Dubspot instructor, Dan continues to perform around the world - as a solo artist C0m1x, with his band, Comandante Zero, and in collaboration with other bands.

We recently spoke to Dan about his busy schedule of current projects – teaching, touring, working with the likes of TV on the Radio’s Tunde Adebimpe, and re-discovering acid house with Push.

“Push is a fascinating instrument because I think it moves the boundary or the envelope of live electronic music, and perhaps it stretches out even a little bit further,” says Dan. A Push user since the early beta days, Dan’s perfected his own setup for breaking the boundaries between live performance and studio production using the instrument – something which speaks to his background as both a session musician and electronic producer. “What I’ve been interested in is how you can use it as a truly live instrument, so essentially doing truly live production, to create music in the moment for the people there. In a sense, DJing your tracks but tracks that you’ve built in that instant.”

Working with Push has taken Dan back in time to the classic days of hardware. “The way you build the drums from the drum rack on the Push and the step sequencer there, plus the new step sequencer in Live 9.1 – it blew my mind,” he exclaims. Using the multisampled Roland TB-303 available as part of Retro Synths, Dan’s been revisiting some of his favorite house music from the 80s. “Right now what I’ve been doing is actually going back to listening to some really classic Chicago acid house stuff, like DJ Pierre, and seeing if I can first replicate these things live on the Push.” Listen to some of the results below:

Starting as a boy learning piano and later bass guitar, Dan started his career in the late-90s, working as a session bassist and as a member of multiple bands. While playing with a band called Soundvision, Dan first encountered electronic instruments in the form of a "massive" Kurzweil K2000 sampler used by the group's keyboard player. “These [samplers] are gargantuan,” says Dan. “There was nothing really that was complex about it at all. I mean, these things essentially are acting as giant iPods. Although they did sound fantastic – the sound of the converters is really wonderful. My job as bass player was really to play along. And from there it led to other gigs in that kind of underground scene that was mixing live instruments with electronic music.”

While sharing studio space and venues with the likes of Interpol, TV on the Radio, and Brazilian Girls, Dan found himself working with two successful acts, electro singer Xavier and indie band Stellastarr. It was during this period – the early-2000s heyday of Brooklyn’s indie renaissance – that he first encountered Ableton Live: “I got into using Ableton because essentially, everything was worse,” Dan explains. “The music industry was collapsing, the budgets were small, I was Xavier’s musical director and I was basically told, ‘we want to go to Europe, we don’t have a big budget, we’re a five-person band, we want to play dance clubs, so how do we do this?’ A friend of mine introduced me to Ableton Live, which at the time was Live 3.”

Working with Xavier’s drummer, Dan formed Comandante Zero, a project which first challenged him to dig deeper into Live’s features - in part for efficiency.  “A lot of the techniques that I developed for performing with Ableton Live, especially for the vocals, were just developed in hundreds of gigs in shitty New York clubs,” laughs Dan. “Our earliest gigs were ridiculous, probably around 30 minutes of setup and 15 minutes of music. The sound men hated us because there was just so much gear, so many wires... we were never quite sure what exactly we were doing.” Playing these clubs forced Comandante Zero to streamline their setup: “One of the great things about New York is that it kind of kicks your ass...you either do something well or pretty much not do it at all because doing it is such a pain in the ass. It really forced us to streamline everything and get the most efficient setup possible.”

Simultaneous to his musical career, Dan had been teaching as part of the jazz faculty of the Brooklyn Conservatory. From this, it was around 2010 that he first started teaching Live at Dubspot. Much as he has mastered the program, he still finds constant inspiration from his students: “To be honest, it’s teaching at Dubspot that I feel like I learn just as much as students,” he says. “Every time I get up there and have to do this for three hours, the amount of ideas I get just talking about the stuff and pointing it out... there’s some people there that are really ninjas and they will throw stuff back at me that I haven’t even thought of.”

Working with Dubspot has also afforded Dan the chance to introduce his students to some of his friends from the music industry - watch below as Dan and TV on the Radio’s Tunde Adebimpe jam out as a Dubspot User Group meetup: