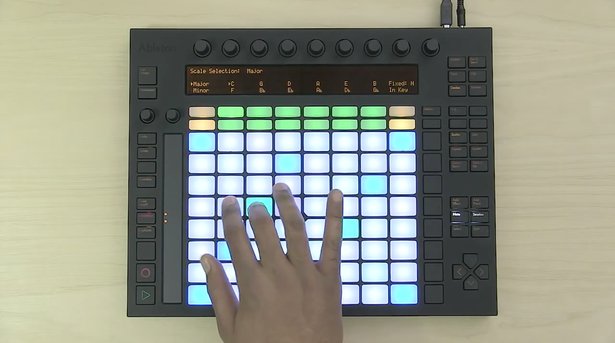 There’s nothing like a killer chord progression - but if you don’t have a music theory background, you might feel a bit lost when it comes to making one. In this post, we’ll look at a few ways to make catchy chords and progressions in Live, including some simple theory education, free Racks to help you, and a look at Push’s scale mode.

Before we get going, let’s pause to enjoy the beauty of a relatively simple and repetitive chord progression, in Derrick May’s classic “Strings of Life”:

To start with, let’s look at 7th chords, a critical element in many chord progressions. In the videos below, Dubspot instructor Max Wild reviews making these chords and moving between them:

If you’re looking for another way to play through some chords, there are a few MIDI Effects Racks available to get you on your way. For a series of tweakable chord progressions for each key, try 8bitBandit’s Holy Scale. AudioBombs’ Deep House Chords rack includes a set of switchable chords best suited to Deep House music. Finally, Certified Trainer Yeuda Ben-Atar aka SideBrain has a set of racks for generating minor and major chords, with control for each harmonic added.

Another great technique for getting the most out of chords is to invert them - essentially, take an existing chord that you’ve played, then invert the note order from lowest to highest. For more on the theory behind inverted chords, and to hear some examples, see this article in AskAudio Magazine.

As of Live 9, you can also invert MIDI with the click of a button in a Clip - learn more about MIDI Clip editing tools.

If you want to get your hands dirty playing chords, try the scale mode on Push. With every key guaranteed to be within your selected scale, you can’t go wrong. But how should you look at the chords you’re making? Here’s a couple of tutorials to answer that:

Hopefully, by now you’ve got some inspiration to make chords of your own. If you’ve got some special chord Racks or sound to share with us, don’t hesitate to get in touch on Facebook, Twitter, or Google+ - and don’t forget to use #MadeWithLive and #MadeWithPush.

Playing Notes and Chords with Push