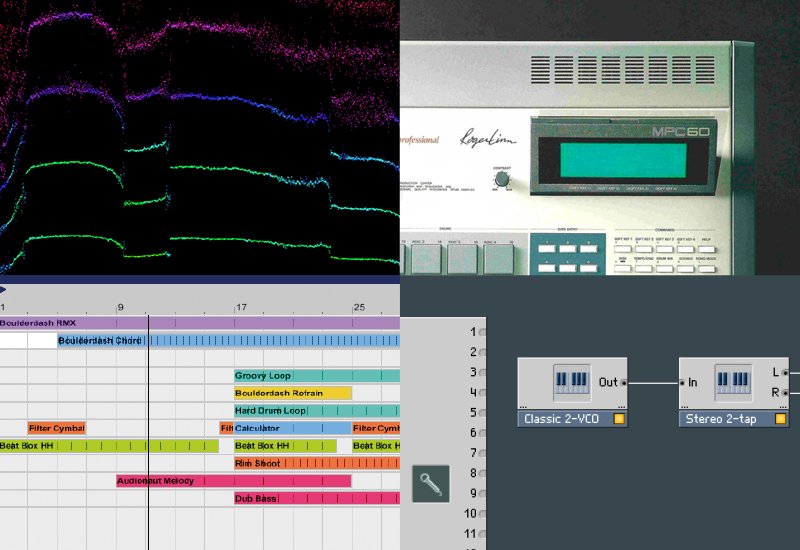 Roger Linn, Stephan Schmitt, Carla Scaletti and Gerhard Behles are all visionary designers who have created new instruments with broad commercial appeal – among other things, they are responsible for giving music makers the MPC, the Linn Drum, Reaktor software, the Kyma Sound Design System, as well as Ableton Live and Push. Straddling the worlds of software and hardware, between tools for expressive performance and environments for sophisticated sound design, their inventions have had a decisive influence on the way music is made today.

At the 2015 Loop summit, Linn, Schmitt, Scaletti and Behles sat down together to discuss their individual backgrounds, motivations and ongoing explorations in the field of instrument design. To kick off the discussion, moderator Dennis DeSantis raised the all-important question of why make new instruments at all. Interestingly, all four of the participants’ responses reveal that their motivations were initially rooted in their own personal needs as music makers:

As they started down their paths towards finding new means of musical expression, one of the first steps involved thinking through what criteria need to be satisfied in order for something to even be called an instrument. Carla Scaletti offers two possible definitions:

To Scaletti’s idea of an instrument as something you practice, Native Instruments founder Stephan Schmitt adds the notion that practicing an instrument has to be an effort – but an effort that the instrument is designed to reward:

Once their inventions are fully developed and released into the world, inventors at times discover that the products of their work are used in ways they themselves didn’t envisage (and are even not entirely happy about). This certainly holds true in the case of musical instruments, where the introduction of new technologies has repeatedly had far-reaching and unforeseen impact on music culture itself. Roger Linn, inventor of the MPC and the Linn Drum, describes some of the disconnect between his intentions and real-world usage of his inventions:

Looking beyond the specifics of how music technologies are used or misused stylistically, Carla Scaletti, the inventor of the Kyma sound design system, explains what she considers to be the ever-elusive, ultimate aim of instrument design:

At this point, Ableton co-founder Gerhard Behles reiterates the idea expressed at the start of the discussion; that the direction of any particular instrument’s design is usually determined by factors that are deeply personal. In his case, it was a fascination with musicians who used the music studio to articulate the totality of sound that was the initial impetus for developing Live software.

Continuing on from Carla Scaletti’s thoughts about the radical new-ness of the early electronic music of Stockhausen, Berio and Xenakis, the panelists discuss their key musical influences and the lineage they see themselves and their instruments to be part of:

As closely tied to one individual’s vision as these instruments are, they’re also products in the marketplace that people buy, use and think about intensively. And so the question (posed by Young Guru in the post-discussion Q&A) of listening to user feedback, wishes and feature requests becomes ever more significant as the once-new instruments themselves become part of the standard music-making toolkit.

Akiko Kiyama: Aalko and the World Beyond Techno