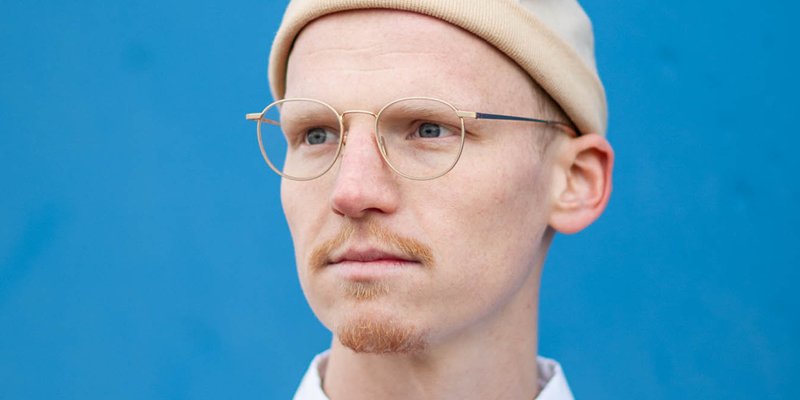 Like many cities, Amsterdam has been struggling to retain spaces where grassroots music can develop. Fortunately, there are a number of repurposed industrial buildings in the outskirts that are picking up the slack. Places like old car repair garages or the pink-painted gas station Roze Tanker are bearing many fruits – including the musicians hand-picked by jazz composer and conductor Tijn Wybenga for his AM.OK (it’s pronounced ‘amok’) orchestra. “You really need to search for them, but suddenly there is some space for the underground scene. It’s super exciting. I found the people in AM.OK by going to all these strange places and checking them out, talking to them. I’ve been on a field exploration to find the right people.”

Tijn, who is a classically-trained jazz pianist, used the musicians to produce an orchestral sample pack that he then used to create his new album ‘Brainteaser’ using Live and Push. “The album is all live, but I made it via Ableton, sampling my own musicians’ improvisations. I’ve been cutting and pasting and reversing and transforming. I was using electronic music tools and culture but the music I recorded dictated what I had to do – live acoustic music told me where to go.” He built the sample pack that underpins the album from four hours of improvised music, including six channels of live electronics created by the drummer who linked all his parts to a modular synth.

The source material for the album was recorded in a building which is currently an artist studio but was previously a movie studio and had been used in World War II for propaganda films. Each musician came in separately for an hour and was recorded playing in a different part of the room. This was partly to try and avoid phasing (“there were still phasing problems,” Tijn laughs) but mostly to create the right environmental sound. “I was a bit enthusiastic about mic’ing” he says, explaining that he used super-close mics as well as recording the sound from far behind the players so he could draw from a range of sound sources.

Tijn Wybenga and the AM.OK musicians during the initial recording process

He also asked the musicians to play long notes, from low to high, and to alter texture or tuning, and he used these sounds to build a sampler instrument [which you can download below] in order to play chords. “They made weird sounds but the texture is so cool. They’d never have played that with the whole crew. It made a very unique instrument for me to work with.”

Each musician also had a score made up of hand-drawn circles with notes written inside, as a way of gamifying the improvisation process. “I instructed the musicians to see it like a Tetris game and move the structures I’d drawn up and down, like going through a maze of notes,” he says. “The game is non-musical almost, it’s just shifting between different chord patterns, therefore they’d play things they’d never play by themselves. They’d play four notes and think ‘this is cool’! Forcing them into a game made them make other music.” 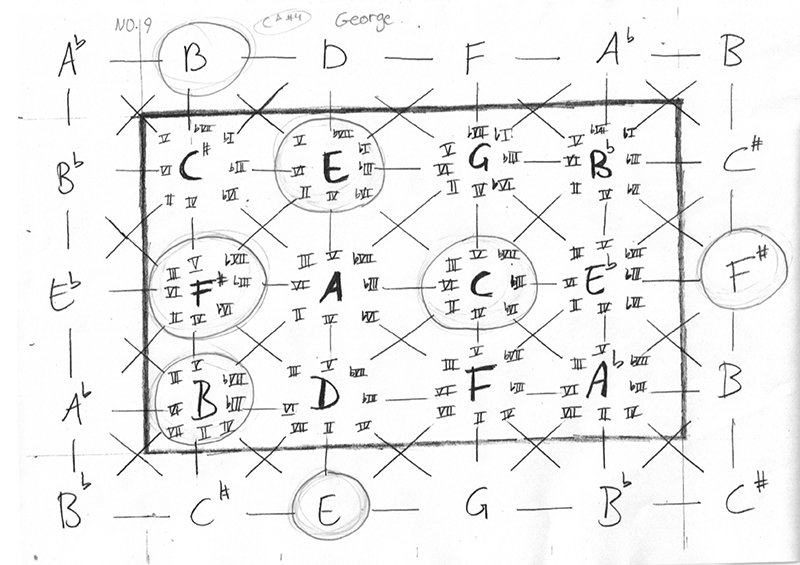 The Brainteaser “score” that Tijn used to gamify the musicians’ improvisations

Adults should be more playful, he says. “Especially me as an educated composer,” he adds, “I tend to listen with my head. I also tend to compose with my head. I wanted to create a more playful way of making music. Ableton made me able to do that. I was able to not know what I was doing whilst knowing I was making good music. I could just use my intuition and enjoy it.”

A look at Tijn’s composition process with Live and Push

The combination of jammed or improvised live sessions being used as samples is one that multi-instrumentalist Makaya McCraven has recently used, very successfully. Tijn is adding another layer, though, by using his Ableton-built sessions as demos, writing the new score out in traditional notation, and re-recording the orchestra playing their chopped-up, reversed, and stacked sessions.

“I like what Makaya McCraven did,” he says, “They were jamming together then he isolated beats and parts and looped them, which made a fantastic result. Or what Radiohead did. I love Radiohead, of course. They would be jamming together to a click track and take from bar one the drum beat and bar three hundred and seven the piano sample and then they would stack on top new beats created by jamming together. That works.”

The musicians responded ‘really well’ to Tijn’s manipulated versions of their improvisations. It wasn’t easy though: “When you take something rather difficult and loop it, it’s hard,” he says. “It was super refreshing for them and at the same time, quite uncomfortable. Going back to hip hop, the way Dilla sampled drums is now a type of live playing. Questlove drums as if he is a sampler that J Dilla is performing. Or Robert Glasper plays the piano how Dilla sampled the piano. The sampling is echoed in the live music scene.”

Behind the scenes at the Brainteaser album recording sessions

Whilst Tijn is classically trained (he did his degree in jazz composition at the Conservatorium van Amsterdam) he also grew up with old-school hip hop, explaining that producer culture helped him realise that music can be built up from existing material. “Learning that music is more related to everything that has been done before and that you can reuse things and recompose things,” he says. “That heavy weight on my shoulders of wanting to be original, of having to be a Beethoven sitting at a desk and writing the perfect melody from my mind, was gone. I understand that taking something and transforming that to something new is also creating music.”

He also spent a lot of time as as teenager listening to electronic music, particularly Aphex Twin. He absorbed the music ‘in my bed, headphones on, lights off, spacing out’ rather than on the dancefloor, although he has since collaborated with Amsterdam Dance Event. He was part of a team of arrangers preparing 90 minutes of Heinrich Schwartz’s music for the Metropole Orkest for the Boiler Room-streamed opening concert of ADE in 2016.

The first electronic aspect that went into his own compositions was using pedals and effects in Ableton Live to transform live sounds. A few years after ADE, in 2018, he created the music for “Prikkel”, a dance performance in a huge plastic bubble in the middle of the woods in the north of Holland, for an audience of 150 people who could squeeze inside. He and Angelo Boltini worked with four live musicians, constantly transforming the sound through modular synths, sequencers, with MIDI and blending that with live and acoustic music.

Wybenga also works with live electronics duo Perforator, who use micro-computers to track their movements, which they link to samplers and effects in Ableton. They’ve also built a cricket synth using ‘super unreliable self-made analog synths’ to come up with new ideas. Another ongoing collaboration is with South African guitarist Vuma Levin who studied in Amsterdam before returning to Joburg, on his new album, which will be recorded with AM.OK. Next year he’ll be working with Orchestre Partout which includes musicians with first-hand knowledge of the refugee experience. The work sends out a signal, he says, about the positive effect of new voices and new sounds on a country. “There are many musical cultures and backgrounds [in the Netherlands], but I think we are a bit behind as a whole country, acknowledging all types of music and culture. We have a lot to learn.”

One area that’s already in the process of changing is the esteemed jazz venue BIMHUIS, which has created a new residency programme for young musicians. Tijn was their first resident, not least because of his connections to the young musicians that make up AM.OK. “They knew that I have this big group of 14, that we’d be spreading the word: that this place that has been a centre of jazz since the 1970s, is again for young people that want to try something new.”

Next, he’s making a remix version of ‘Brainteaser’ with Amsterdam-based producer lowkolos who is ‘an Ableton maniac’. “He’ll use everything that the biggest Ableton nerd wants to hear. For my album I stayed pretty old-school: I had my Push. I used sampling, warping, reversing, using delays. I was really composing the music and then I would throw away Ableton and rewrite it all, as a traditional score, and play it live. By doing so I also lost something that I found in Ableton – certain sounds and textures that are hard to find live. By combining them the sound would have been more characteristic. Now my second step is to use my Ableton demos and remix it, really use Ableton in all the steps.”