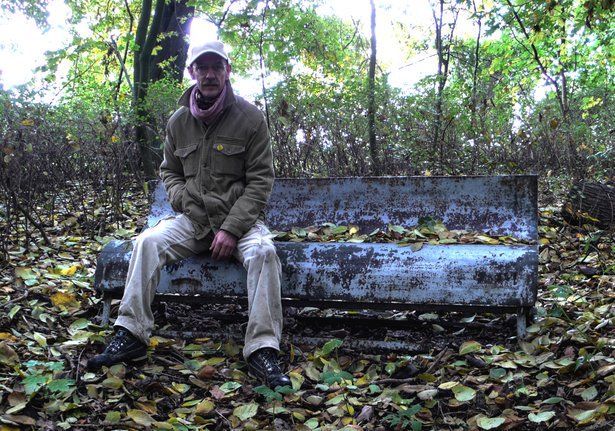 Besides being one of the nicest people you could ever hope to meet, Thomas Fehlmann has always been in the right place at the right time. His first band, Palais Schaumburg, was at the forefront of German new wave in the early 1980s. He was among the first European proponents of the emergent techno scene, and helped to cement the Berlin-Detroit connection with 3MB, his production trio with Moritz von Oswald and Juan Atkins. More recently as a member of The Orb, and as a solo artist Thomas has been releasing a steady stream of lushly infectious electronic music – much of it via the KOMPAKT label.

On the occasion of KOMPAKT’s 20th anniversary we talked to Thomas about workflow, playing with an orchestra, imaginary keyboard players and carry-on luggage.

What is the production situation like when you’re working with Alex Patterson on The Orb material?

The working style with Alex is very much a hands-on kind of situation. More than ever, he feeds me with sounds and I record them and incorporate them into some sort of track format or tune format. This style has very much come to new fruition through Ableton because before when we worked with Logic, or even before that with samplers as a source of his input, it always took quite a while to get it in time, get it in tune, or these sort of details.

To build up a structure of some kind?

Yes, whereas before I often had to say "Let's wait a minute Alex" or maybe I wouldn't really want to go into detail with something because it might be too time-consuming, now it is quite the contrary. It’s often the case that if I don't necessarily think in the first second "oh, this is a great idea!" while I'm putting it into some sort of ‘quick solution’ loop. Then I discover there is far more to it than I initially thought there would be. So not only is it quick and accessible, but it's very much helping our working relationship, and I think a lot of recent development of tracks would have sounded very different if it hadn’t been for Ableton as an interface from the start to a finished track.

Listen to “Ripples” from The Orb’s 2005 album Okie Dokie It’s The Orb On Kompakt:

Generally, and this is not the first time I say this, but if it hadn’t been for Live, I don't think I would have started to play live again after me being quite in the background of the live circuit up until, say, the year 2000 when I started really seeing a possibility of a work process which would, for me, allow it to be called live.

So has the way you play live changed over the years that you've been using Ableton Live?

It has grown. I acquired Push the other week and although I'm not quite in a situation yet where I would like to take it on stage with me, I expect that it will be improving and re-shaping the actual term 'live' a bit more, you know? To be honest with you, I have to think twice of taking something along which is heavy and really changes my travelling package. Therefore, in that sense I'm a lazy bastard...

Well, it won't happen on the American tour, but when I travel in Europe it's definitely hand luggage only.

Your ‘hand luggage only’ policy is actually quite legendary – I don't know if you know this.

You know, that goes back quite a while, because I remember in the year '79 when I met Robert Fripp for the first time, he was travelling the world doing Frippertronics concerts, and he said – this was after the first big phase of King Crimson and they were kind of on a hiatus at the time – he came up with this saying, which kinda stuck with me, "the future will be small and mobile." Even though he wouldn't have been able to see quite how real this saying would become, I'm still very sympathetic to this idea. Obviously it gives you independence not only from physical exertion, but it also gives you an independence from the whole way a tour has to be set up in terms of financing, in terms of organisation, in terms of personnel, in terms of the whole infrastructure. So yeah, this helps me alot.

Staying on the topic of playing gigs for a moment, what are you looking at when you flip open the laptop to start a set?

I'm using it in Session View, and I use it a little bit like a tape recorder, in the sense that I have all the bass drums on one channel and I have the instruments pretty much separated out, which normally gives me an average of 14 tracks or something. Then, each track has a certain amount of clips, maybe 20 rows of them, and the arrangement is slightly pre-organised in the sense that I move downwards and have certain variations in-between.

In between gigs I take a little bit of time – and also great pleasure – to go through the live set again and rehearsing but also trying to remember what kind of thoughts I had during the last gig. Sometimes trying out new samples, trying out new synth line ideas, and adding new ideas as the year goes along, you know? As a matter of keeping it entertaining and fresh for me.

Your productions are sonically very lush. What’s your general approach to finding sounds and coming up with melodic parts?

I often look for ideas and for parts where, in your mind, you don't necessarily see the keyboarder playing this and this note. I always try to develop something which doesn't have this linear kind of melody feel that could be easily reproducible with the keyboard. As I'm not a keyboard player in the classic sense anyway, it always makes me a little bored when I see the keyboarder in my head playing this bass-line or this and this melody or chord. I always try to make it feel as natural and automatic as possible. This is, I would say, the main part of this work, to get this in shape, so I don't feel reminded of the synthesizer which makes this sound. More or less, I like to get away from the original source. Also in terms of using samples, I think more and more these days it should be difficult for me to trace it back to where it came from, in terms of no longer being a recognisable lick or break, or whatever.

Also with Live – and this is something I use quite extensively these days – if I have say a sample of one bar, then I zero the volume level and just pick up one or two little elements in the sample and interweave them with other samples I do the same with. It's a kind of collage technique And with this I immediately forget also what the sample is, where's it's from. I don't have this memory then so much of what it is, but it very much starts to have a new life very quickly. This is something I enjoy a lot and this is also, coming back to the working style with Alex, this is something I can do very quickly and brings radically different results in the blink of an eye, you know.

So when Alex comes to Berlin, we have three or four days and sometimes quite a bit of a workload, but it's not that we actually force ourselves to be quicker and quicker. This is never really on our agenda, but it has naturally developed that we can be quite quick with our stuff and also sometimes we surprise ourselves by how little it takes to get a certain direction for a track. It might not be finished just yet but it's clear, "okay, this is the heart we like to work around.”

Listen to "Titan One":

Speaking of recognisable (or not) sound sources and instruments, how did the symphonic Titan One / DFM 12” on KOMPAKT come about? How did you go about preparing for working with an orchestra?

It was a commission by the Montreal Symphony Orchestra in association with Mutek. The intention was to bring classical music and electronic music to a different audience. So what they did, they used a different space than the Symphony Hall in Montreal, and had the whole orchestra there playing Mahler's First Symphony first, which was quite impressive for me and the first experience as well to hear a 100-piece orchestra playing such a piece. And then I was commissioned to create an interlude or an intersection before I would play my regular live set. So basically I was to build a bridge.

So what I did is I went and sampled a couple of elements of recordings of the first Mahler symphony and developed a tune out of what I found. But I wasn't very straight in the sense that this was the first movement and this is second movement, I just used say two dozen sounds from various parts of the whole symphony and just drew from there. Then Ari Benjamin Meyers was sitting in with me and we replaced some of those samples and he put them into notation for a selection of musicians to play along with me. So basically it was divided into a section of classical instrumentation, and a section of me doing electronics, mostly doing those bits that are not easily transferrable into a proper score

So basically you sampled an orchestral recording, made a sampled-based composition, some of the samples were turned into notation and then played by some of the orchestra instruments.

Exactly. That was the first track, “Titan One”… I used the title Titan because the first symphony for Mahler is often referred to as Titan. For the second track “DFM” – which is “Du Fehlst Mir”, an old track from my first Kompakt album – I did a similar thing where I also made a new version of it, and with Ari Meyers divided it into a classical section and into an electronic section.

It's interesting how with that change of instrumentation, your modern electronic music piece started to resemble a piece of 1970s minimalism. Especially in the “DFM” track.

This is also maybe because the original was already slightly going in that direction. Maybe also because I used a percussion player using marimbas and vibraphones. I remember at first when the idea came up, I was feeling a little scared because I must admit I'm not such a fan of this fusion. Or, let's put it this way: the results of those fusion concepts never convinced me much.

And then after my first worrying, my second thought was "Well, that's what you think up to now, but now you have the chance to prove what you hear in your head!" Which is always an incentive. But anyway, I let myself be persuaded.

As we speak, the KOMPAKT crew is setting up a pop-up store here at Ableton headquarters. You have been associated with the label for a number of years what are your thoughts regarding the 20th anniversary of KOMPAKT?

Well first of all I find it important to mention that The Orb have released an album on Kompakt (Okie Dokie It’s The Orb On Kompakt) which also marked a little bit of a twist in my relationship with Alex, and since then we allow ourselves more freedoms in exploring areas where The Orb have not necessarily been expected to go. I'm very grateful for Kompakt to have allowed us to do that. And finally I would like to mention that I also contribute to the 20th anniversary with the release of my new 12" called "Eye/Tree" which is coming out in October on KOMPAKT.

Be sure to also check out this video of Thomas Fehlmann’s recent performance at the Decibel Festival.