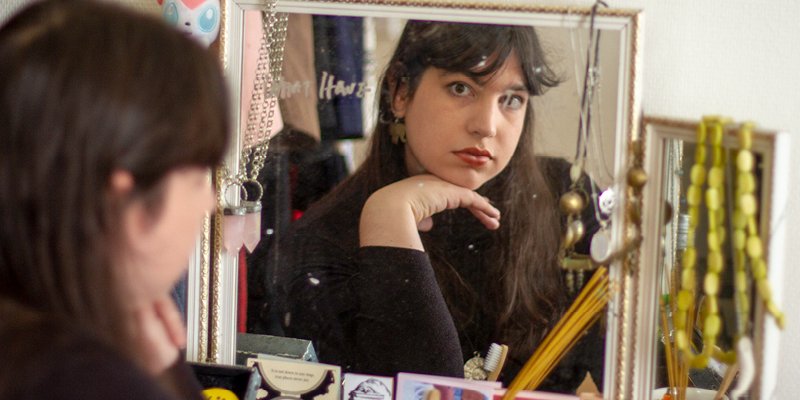 Out on a limb in the South West Pacific, New Zealand is far removed from the overbearing influence of cultural hubs across Europe and the US. These days, it’s as hyper-connected as anywhere in the world, but its physical remoteness still has some bearing on how musical scenes develop, compared with the busy through-roads of the Northern Hemisphere. Growing up in the ‘90s and ‘00s, Tāmaki Makaurau (Auckland) resident Amelia Berry was picking up on a typical international spectrum of Kraftwerk, Radiohead and Snoop Dogg through her older siblings’ bedroom doors and catching the videos for European chart dance like Daft Punk, Fatboy Slim and (her first cassette purchase) Aqua. One exception that felt much closer to home was a wave of local hip hop orbiting the Dawn Raid Entertainment label.

Nowadays, New Zealand’s musical landscape is much more varied, and Berry herself is immersed in multiple different scenes. As Amamelia, she’s nurturing the electronic side to her creativity in the wake of her first album, released in 2020 on Sunreturn. WOW! is a joyous, sun-kissed celebration drawing on rave motifs – breakbeats, chunky basslines – and matching them with pop sensibilities, all shot through with a queer panache that links the album to Berry’s other myriad ventures.

To many in New Zealand, Berry might be best known as a radio personality, having hosted shows on local student radio station 95b FM.

“95b FM is a real institution in Tāmaki Makaurau,” she explains. “I remember it being the definition of cool when I was growing up. I started doing a graveyard show maybe six years ago, but for a long time I did a specialist show called Amelia's Secret that was just an excuse for me to play all the extremely weird audio I was listening to. Wednesdays at 11pm you could tune in and hear an Ivor Cutler radio play into 20 minutes of socialist reggae tunes into Polish ambient synth from the 80s into a test flexi-disc demonstrating the capabilities of some old vocoder.”

Broadcasting aside, Berry’s active participation started when she picked up the guitar, joined a band at 16 and became exposed to a vibrant scene of all-ages gigs hosting local indie bands. It was an eye-opener for her to witness a New Zealand-rooted movement at that time – she nods to the fact much of her homeland’s musical reputation starts and ends with renowned indie label Flying Nun and the bands they broke to the rest of the world in the ‘80s and ‘90s. Given Berry’s love of Blink 182, it’s no surprise to hear her guitar-oriented endeavors have wound up in Babyteeth, a “queerbo pop-punk” three-piece who released their debut Poser EP last year. It was learning how to record her bands that drew Berry into the world of production, although the autonomy of a DAW can also be a drawback for someone who thrives on the social dimension of music.

“It always seemed natural for me to make music with other people,” Berry explains. “I think live music is so exciting – having a bunch of people on stage making sound together is an unparalleled experience. Electronic production kinda snuck up on me because it was a way I could take control of my own music. I was spending so much time in DAWs and I was obsessed with Ninja Tune, but it took me a long time to release anything because I felt like I didn't look the part, the music was too weird. I didn't really know how to connect it with audiences.”

Rather than a concerted decision to make an electronic album, WOW! came together as a strange mixture of circumstances from laptop failures to lockdowns. Given her critical view on her own work, Berry considered electronic productions to be a sideline hobby rather than a focus. But after she had put a few tracks on her Soundcloud, she was approached by Zac Arnold from burgeoning Tāmaki label Sunreturn about putting an EP together. On the cusp of readying the tracks for release, Berry’s computer stopped working and the pandemic took hold, enforcing a rethink.

“We pushed back the release, and in the meantime I dug out an ancient laptop and worked on some new tunes and revived some really old stuff I'd forgotten about,” she says. “By the time my proper computer was repaired we had enough material for an album. To me it feels kinda like a compilation of all the best stuff I'd made up to that point. Tracks like ‘Sad and Lonely’ had been floating around for years, and others were made specifically for the record.”

Considering the broad timespan of its production, WOW! hangs together sonically. It’s diverse in the way an album should be, but whether it’s starry-eyed house, melancholic downtempo or hopelessly romantic amen tearouts, a consistent quality glues the release together. In Berry’s terms, the sound of WOW! could be deemed “digital grubbiness”, pushing back against the polished veneer of modern production without going into full analogue distortion mode to achieve, “something that sounds like it’s ripped off an old CDR.”

“For me, a lot of WOW! is defined by FM synthesis,” she explains. “Particularly Dexed, which is a free VST emulator of a Yamaha DX7, and Operator, the FM synthesizer native to Ableton Live. I think FM synthesis’ reputation for being quite difficult and esoteric really attracted me to it, and I love how brittle and digital and artificial the sounds can be. I also got a little obsessed with this one crash sound I sampled from an old Casio.”

One of the ways Berry was able to achieve that particular aesthetic was re-sampling. ‘90s dance music was rife with sampled synth sounds as producers realized they could grab the sound they needed without buying the hardware, and that sampling, re-pitching and processing carried distinctive sonic artifacts with it. Aiming for that magically unkempt finish, Berry would recreate the effect within Live by stacking basic synth sounds, applying effects like Reverb, Overdrive, Delay and Redux, making a chord and then bouncing it. Elsewhere, she turned to vintage samples and SoundFont packs that she found combing the internet and niche locales like Breakbeat Paradise.

Overall, Berry approached WOW! as a celebration of the possibilities within electronic music production. As a trans woman she’s forthright about her identity, not least in her self-described “straightforward expressions of queerness” in Babyteeth, but she swerves any literal themes on WOW! in favour of a more playful representation. Take ‘Hot Bitch Dot Zip’, a fierce queer club anthem if ever we heard one, not least thanks to bb gurl and Baby Zionov’s slaying vocals.

“I'm not shy about being a trans woman and it seemed really natural to me to do a track like ‘Hot Bitch Dot Zip’,” says Berry. “bb gurl and Baby Zionov are people whose music I love and who I love talking to about music. This is just who we are, having some fun, making something our friends can sing along to.”

Berry credits Baby Zionov, aka Aaliyah, as her go-to sounding board for new ideas, and equally heralds a golden time for queer electronic music coming out of Tāmaki in the present moment. There’s a sense of the local, of people supporting each other within a close proximity, whether it be in the studio or at the Lipgloss club night Berry runs with Zionov and Princess Richard. From close companions to the fleeting connections criss-crossed on nights out, this nebulous community energy is a vital fuel for Berry’s development as an electronic artist.

“I think talking about music, and dancing to music, and being jealous of someone's synth set-up, and asking someone for help with a mix – all of this stuff is what makes music possible and makes it good,” Berry declares. “Back when I was more in the indie guitar scene there seemed to be this real individualism and territorialism about music. I remember one guy complaining ‘cause someone else played, “his chord”. I think with electronic music, and the extended queer-electronic music community of people in Tāmaki, it feels more like music is a thing to be shared, to be experienced together.”

Nodding to collectives like Filth (who just enjoyed a breakthrough Boiler Room broadcast) and labels like Noa Records and Kuini Qontrol, Berry considers the scene in New Zealand to be in rude health. Rather than a hindrance, its modest size and remote location means it’s easier to find support for ventures outside the norm.

“Maybe that's why we do so well in niche genres like dungeon synth and vaporwave,” Berry ponders. “I think maybe there is still a bit of a feeling of trying to live up to, or recreate aspects of UK or Berlin club culture specifically, but the past couple of years especially has seen Tāmaki develop more of our own thing, that makes sense on our smaller scale.”

Friends, not Samples: The Soft Pink Truth on Collaboration and Pleasure