Edouard Manet, the French modernist painter, once gave a still-life painting lesson to another French impressionist, Eva Gonzales. His directions for capturing the moment could be taken as instruction for sketching in any creative discipline; “Get it down quickly. Don’t worry about the background. Just go for the tonal values. See?”

When we think of sketching, our minds tend to tilt towards the visual arts – an oil painter sketches out a study before picking up a brush, an architect roughly draws their vision to experiment with form and texture, and graphic designers work in doodles and moodboards before creating a final design. Their first step is finding direction.

“In music it's the same,” according to Raúl Sotomayor, of Mexican electro-cumbia sibling duo Sotomayor and solo project Tonga Conga, “you need to have an idea that you can listen to. That idea can be whatever – a structure, a sound, rhythm pattern, chord progression, some melody that you sing. But it doesn't really work in your mind, the main point is that you have it recorded somewhere.”

While Sotomayor often starts with sound, for some music makers the creative process starts on paper. This can be approached in a very literal way – writing down concepts or directions in words – or these initial ideas can take more abstract forms.

Anna Meredith shares sketches of tracks from her FIBS album

Perila, a Russian ambient musician and sound designer, takes both approaches. “Every day I write down ideas for potential or dream projects. I also write stories and poems, to express my thoughts in a more abstract way. If I have an idea for a certain composition, I might draw a timeline. Like: intro, escalation of sound, everything drops, ambient concentration, and so on. I schematically write and draw it down. Writing, drawing and recording are all kinds of sketching I do.”

“The only way you can come to trust yourself as a writer”, says author Ursula K. le Guin, “is to write.” This doesn’t just apply to writing words – the secret to making music is making music. Habitual musical sketching and experimentation makes a big difference to both skill level and the sense of satisfaction each session brings, as settling into a creative mindset gets easier with practice.

“Writing is a ritual for me.” Says Perila, “In the morning, when everyone is asleep and I haven’t yet opened Gmail, I’m like: “OK, hello. What’s the vibe today?” Seoul-based avant-garde electronic producer Net Gala agrees that with starting music, consistency is key – “I try to do it every day, for at least an hour or two.” 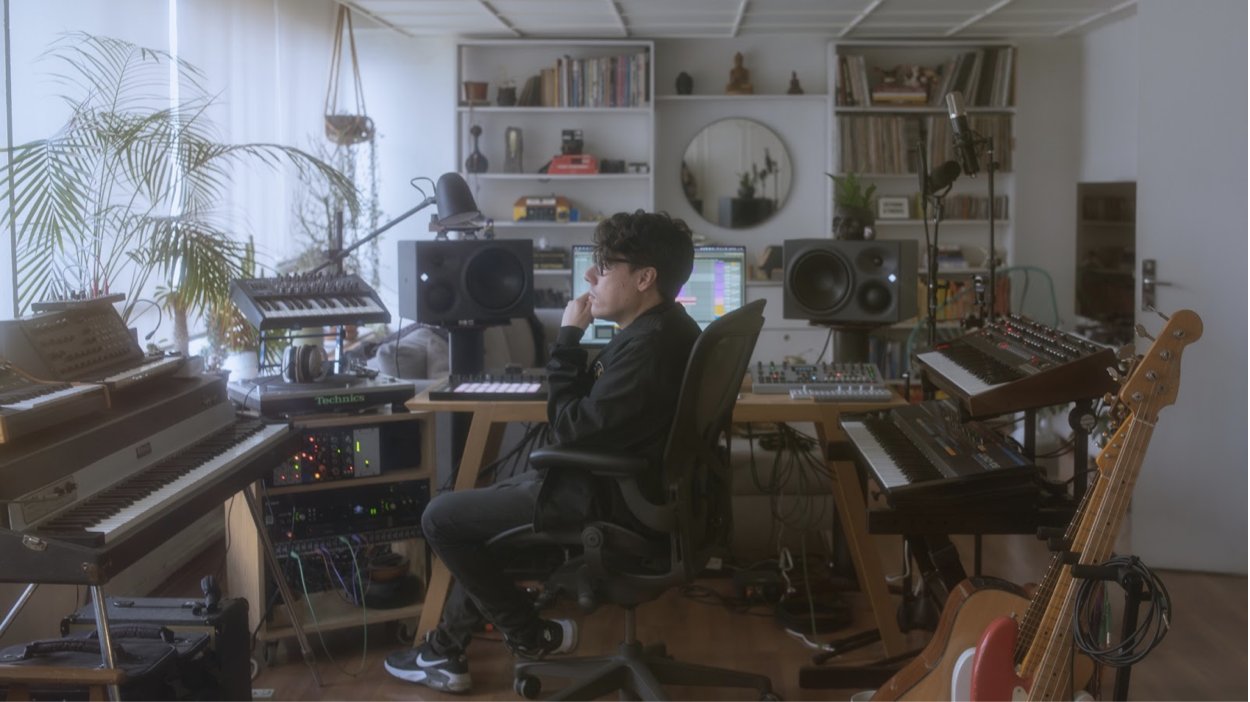 Raúl Sotomayor in the studio

Sketching with regularity can help you let go of the pressure of perfectionism, and arrive at a place of more casual creativity. Simply start, then sift through your sketches to find the gems later. Raúl Sotomayor has found that aiming for quantity tends to result in quality ideas to build from; “I used to make a beat every morning, spending 10 minutes to an hour, and then go on with my day. That was really helpful, because at the end of a week, I'll have seven beats and most of the time, at least one of them would be useful.”

This routine helped him strengthen both the skill of starting, and his ear for what works. “That helped me to be objective about which ideas are good, and which are not. Because sometimes, you have a golden idea in a minute and it's like, ‘this is awesome, I know how to finish the song,’ and that's it, I'll finish it later. If I already have a good sketch of an idea, that is the most difficult part of making a song. So, being really consistent in this and not losing time to bad ideas is also really important. Sometimes you might spend two or three hours just choosing a kick drum. And it's like, why are you doing that?”

The element you start sketching with is important – it should be something that makes you feel playful, or that begs to be manipulated, or that makes you imagine the places it can go. This could be a sample that inspires you to transform it into something new, a synth sound brimming with potential melodies, or a beat you can’t get out of your head. This first element will help you get started, and it can also shape the final outcome.

Starting in the same place every time is one way to work towards having a signature sound across your productions, or solidifying your music’s setting within a genre. But for some artists, this can lead to a sense of homogeneity within their body of work, and switching up the starting point helps them avoid getting stuck in a rut.

"I have infinite notes of phrases and words. Sometimes that can trigger more of a concept than a song, but it's an important part of what I do.” – Raúl Sotomayor

Floyd Lavine is a South African DJ, musician and live performer based in Berlin, where he founded Afro house collective RISE and afrofuturist label Afrikan Tales. He likes to work with a specific setting in mind. This can prompt certain factors of a track, such as BPM or sound palette, giving him a framework to start creating.

“Generally my guideline is to make something that I would like to play out, or that I would like to release. For example, I want to make a track for 4am in a basement. I have that as the concept, then I know which elements I have in the computer that would fit.” He knows he wants his tracks to get people moving, so getting a groove happening early on is key. “I want to get the rhythm part coming together, then I start working towards melodies, samples and stuff like that… I'm starting with the part which does the work in the club.”

Net Gala lets the intention behind each song determine its starting point. “For me, drums, melodies and all these different elements serve different meanings inside a track. So if I think this track should focus more on the genre, then I would probably write drums first. But if I think this song needs more of a dramatic, theatrical experience I would write melodies first and add drums accordingly.”

The studio, for all its creativity, shuts out the world by design. Sometimes we need to look beyond our instruments and our own thoughts to freshen our perspective and get new ideas.

For western European painters, the idea of sketching really took hold in the early Renaissance with this exact idea in mind – take some paper and chalk, go out into the world and see what piques your interest. Find inspiration in nature or everyday human life, sketch a quick impression, then take it back to the studio where you’re equipped to translate a fleeting moment of beauty into a complete work of art.

Like Caravaggio or da Vinci, you can’t take your whole studio out to the lake, or to a cafe, but you can take a sketchbook, your phone, or even some portable bits of music-making gear. Creating in a new environment can take the pressure off the process of getting started – especially if your creation space is your home, filled with other associations and distractions.

The filmmaker, visual artist and musician David Lynch is well known for both his propensity for routine, and his attachments to certain places. During one eight-year phase he was a regular at Bob’s Big Boy in Burbank, California. He’d go there every day at 2:30pm to have several cups of coffee and a chocolate milkshake. All hopped up on caffeine and sugar, he’d start coming up with ideas and scrawling them on napkins, until he had to rush home to write.

Like Lynch, Net Gala finds the bustle of their local cafe a soothing environment to get creative, taking their DigiTech sampler or laptop and Push with them. “You know how people feel isolated and alone in busy and loud places? If it's too quiet, you feel anxious, but it's super loud, so I’m satisfied. I couldn't do it in my house (it’s a single studio apartment) because I have too much stuff going on in my head, so I need to go outside.”

Different locations are also full of different sounds to spark new musical ideas. Recording natural sounds such as birdsong, dripping rain, or rustling leaves and layering them in with your tracks can give a sense of place. Or man-made noises such as the rhythm of a train or the clanking of pipes can be jumping-off points for a new beat. By recording voice notes of sounds that capture your imagination you’re saving a bank of fresh starting points in your phone.

Sky Deep on translating the outside world into music

Keeping an ear out for spoken language in the real world can also help you form musical concepts. An overheard conversation can be transformed into lyrics, a snatched phrase could inspire a musical mood, or the rhythm of chatter could be turned into texture.

“If I'm watching a movie, and someone says something that would be like a perfect title for a song, I will write it in [the Notes app]. I have infinite notes of phrases and words. Sometimes that can trigger more of a concept than a song, but it's an important part of what I do.” says Raúl Sotomayor.

We make music because we love it – both making it and listening to it. And nothing’s more inspiring than that track that we wish we could’ve made. If you make sure to keep track of the music that moves you with an intention to create something inspired by it, you’ll never be short of jumping off points for sketches.

Seeing a crowd react to sounds in real-time is always an electric experience, so it’s no surprise that inspiration often hits Sotomayor mid-DJ set. “I use Traktor to play – when I play a song that I then want to sample I'll just write a note, because you can put comments on the song. Then I go back to the library and look for all the songs I could sample afterwards.”

Keeping playlists that serve as moodboards for music-making sessions is a popular tactic. “Sometimes I will have an idea because I have listened to another song. So I will save the song on my Spotify playlist called Inspirations, then come back to it.“ says Floyd Lavine.

A straightforward playlist of tracks that caught your ear definitely does the job, but you could also break your playlists down further. Dive into different genre inspirations, or group tracks according to elements such as beats, melodies, lyrical inspiration, vocal deliveries, or specific instrumentation. Then when it’s time to sketch, you have a database of sounds to inspire you, whatever sort of mood you’re in.

What sketching means to you as a music maker is totally personal. Whichever tools you use to sketch, whatever gives you that flicker of inspiration, and wherever you feel most creative, the important thing is to take the time to experiment, follow your instincts, and see where your curiosity leads you.

Keep up with the artists featured in this story – Raúl Sotomayor’s projects Tonga Conga and Sotomayor, Perila, Net Gala and Floyd Lavine.