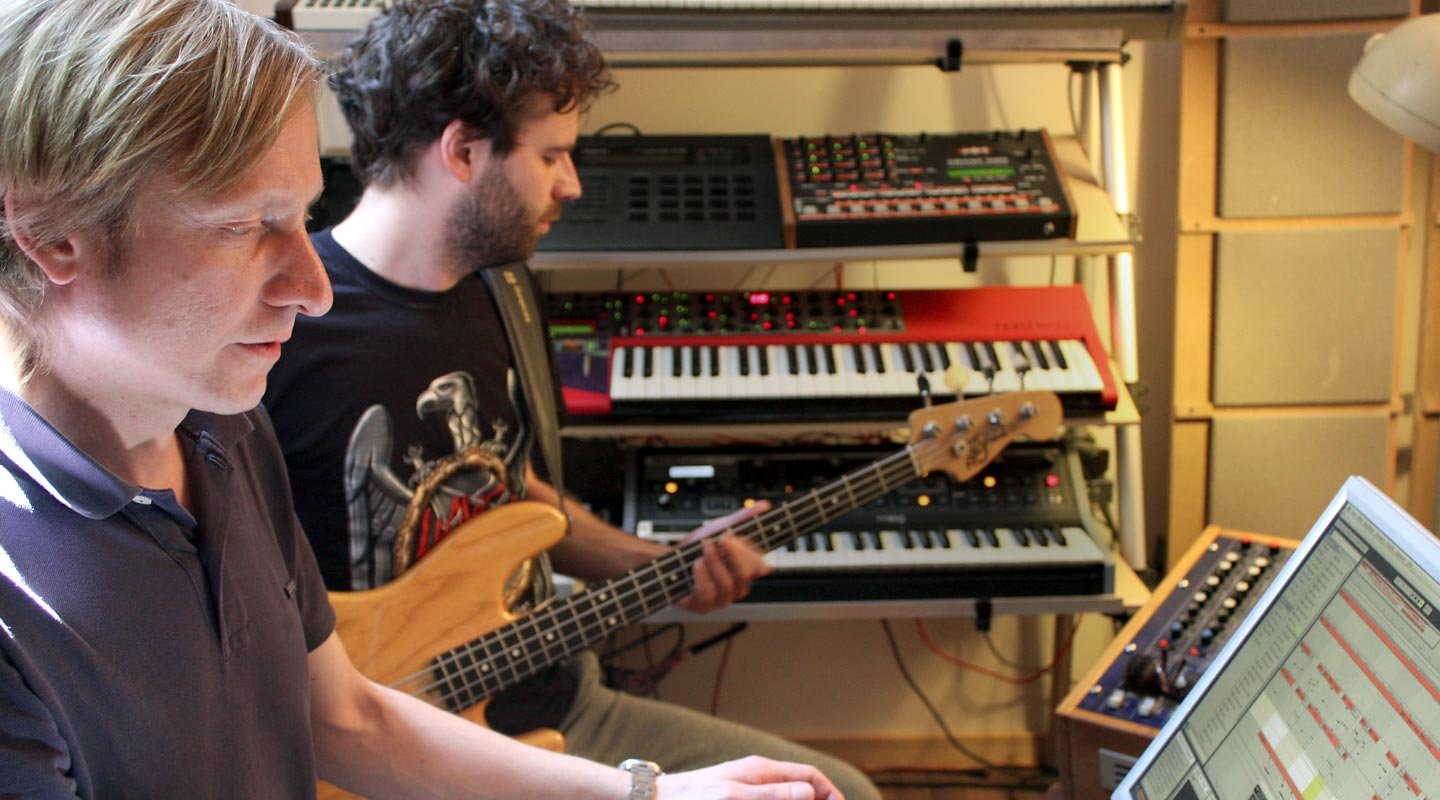 Far from the distractions and pressures of the big city, the picturesque German town of Heidelberg has fostered a surprising number of musicians who have made their mark outside of rigid genre conventions. 1970s krautrock legends Guru Guru and house pioneer Move D still live and work in the medieval town with the castle on the hill. Add to that list LOPAZZ & Casio Casino, a Heidelberg production team who freely mix live instruments with electronics and are equally adventurous when turning out crafty, floor-filling club tracks or composing evocative soundtracks for globe-trotting documentaries.

We visited LOPAZZ (Stefan Eichinger) & Casio Casino (Steffen Neuert) at their studio to chat about musical evolution, tape machines, software, and the differences between club and film music. Plus, the duo share and explain some useful production techniques in their track “The Drift”, which they’ve provided as a free downloadable Live Set.

You recently released two 12"s on the Get Physical label, but you've been making music together for quite a long time. What are your musical roots both together and separately?

Casio Casino: This year is our 20th anniversary of making music together. We started out playing in bands together, LOPAZZ played guitar and sang and I played drums. We were playing grunge, krautrock and indie. Around 1997 I bought my first drum machine, a Roland R8 and slowly started putting together a studio. For a long time I played in the formation „Bergheim 34“, which was a mixture of electronic music and acoustic instruments. Nowadays I produce music for films and electronic music together with LOPAZZ.

LOPAZZ: I started recording my own band in the late 80s and got more serious in the early 90s when I started recording other people’s bands with my tape machine. In those days we put out a lot of cassette tapes with some admittedly very weird music in the vein of the Butthole Surfers or Ween. Then, thanks to my track „I Need Ya“, which was released by Andreas Baumecker on Freundinnen/Output in 2003 and subsequent releases on labels such as Get Physical Music, Cocoon and Poker Flat, I’ve been touring worldwide as well as producing, mixing and mastering for many years now – also for other artists such as DJ T., Gerd Janson and others.

At what point did you start using software for music? How do you use software and hardware these days?

CC: For a long time we worked with tape machines. Then came the hard disc recorders, with those one could actually loop things and put together a little MIDI studio. Finally in the early 2000s, the first computers that could stably run audio. Cubase and Logic were the first programs we used. Then, because of all the time-stretching and audio manipulation possibilities we soon started using Live.
For a while, I was overwhelmed by all the new possibilities; I had to try out every new plug-in and software instrument. There was a lot of drawing of breakpoints with the mouse until I realized that ten fingers are better suited to making music than just one. These days, everything’s more relaxed – we play just about everything by hand and I feel like I don’t even need to know every function of a piece of software in detail, as long as the results are good.

L: I was never a fan of software and computers. It took me a long time to get comfortable with using software and I’ve only used Live since I’ve been able to live with the audio engine (Version 6). I have a studio with a lot of instruments and outboard equipment and I use Live there and on the road as composition software. And of course, as a live sequencer at gigs. The uncluttered layout and the many different ways of working with audio material are important for me since I often deal with recordings of instruments such as hardware drum machines and synthesizers, vocals and guitars.

How did you get involved in soundtrack work? What kind of films do you work on?

In 1999 we began working for Along Mekong Productions here in Heidelberg when they gave us the opportunity to compose the music for two films in their „Treasures of the World“ series. They liked that they didn’t have to use any prerecorded music, could have a say in the music and have everything custom-made and matched to the edits in the film.

At the moment we are working on a series of films about hiking in Europe, another on spirits such as whiskey and absynth, plus a film about the beginnings of the house and techno scenes in Germany after reunification. LOPAZZ also does sound design for labels and films such as the film „Kalifornia“ by Laura Mahlberg which was shown recently at the Berlinale film festival.

Film music and club music can both be subject to certain formal constraints. Do you enjoy the challenge of making music that has to ‘function’ in a particular context?

Film music is made for a director, an editor, a film. When we begin composing for a film we first meet the director and the author of the film and talk about his or her idea and vision – this is essential input. We’ve produced a lot of music for documentary films about Arabic, Asian and African countries and this requires some preparation.

Club music is made for the DJ and the people on the dancefloor, but the composition and production are completely up to you. Of course, even here there are certain rules, but essentially there are no limits. Since we usually work with hardware in the studio, we use Live as a loop sampler in which we record and arrange our music. We usually stay in the Session View for as long as possible and work out a rough arrangement of the track before we switch to the timeline in the Arrangement View at the very end.

To illustrate their production style, LOPAZZ & Casio Casino have provided a free downloadable Live Set of their track, “The Drift”, which sits nicely halfway between their club-oriented and soundtrack material.

Let’s talk about “The Drift” Live Set. There are quite a lot of elements in this track, yet the mix is so tidy and clear. Do you have a general strategy regarding mixing?

L: First of all I try to figure out which frequency range each track and sound should have. Basslines, kicks and so on need more bass than let´s say hi-hats, melodies, etc. I start cleaning the low and high frequencies with cut filters. It´s a tough game sometimes, for sure. You don’t want to have a super-clean sound, but it should have as few resonant frequencies that could cause trouble on speaker systems as possible. Actually, I don’t think that this track is tidy and clear, but thanks for the compliment. Compared to other artists, I think our sound is always a bit dirty and mushy.

There's an EQ plug-in in just about every track. Are there any rules you always follow to find and get rid of 'problematic frequencies'?

L: Well, yes, that´s ok – but only as long as you are doing this in a well-balanced listening environment. If there are certain room modes that already boost these frequencies you are in trouble. With looking at how we've used the plug-ins you will see that there are mostly just cuts and a few minimal EQ settings. I would never boost the high-freq´s with plug-ins, I’d use analog equipment instead.

The string instrument group has a compressor plug in that is side-chained to the electronic kick drum. Can you explain what side-chaining is and what it's useful for?

CC: In this case, sidechaining means to put a compressor on one track, while the gain reduction is controlled by another track. Here the strings are lowered in volume every time the kick comes in, thus leaving more space for the kick in the mix.

L: The kick triggers the compressor. This kick groove is adding a rhythmic component to the strings.  It´s a nice addition to play around with attack and release times, as well as the threshold and ratio. You can get amazing results.

This track features both electronic and acoustic drums and the latter is gated pretty heavily. Is this something you do for clarity when layering the different drum sounds?

CC: I think the gate on the electronic drums here was more a question of style, than a technical strategy to make the mix clearer.

L: Yes, there is no general rule, it´s always a matter of composing, the message of the track, the layers, sounds.