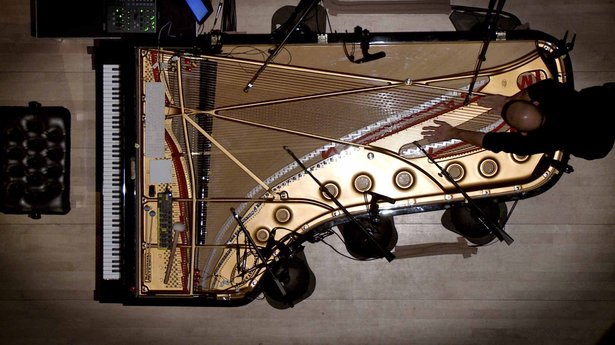 Prepared piano is a perfect example of how thinking differently and reconfiguring available technologies can transform how you make music. In the mid-20th century, when composers like John Cage and Henry Cowell started placing cardboard, metal and their hands between the strings of a piano, they created a machine for triggering fascinating percussive tones more akin to the timbre of industry than the concert hall.

Suddenly the piano’s physical properties could be explored in ways that went beyond the pre-scripted harmonies of the keyboard, leading to new kinds of music which dealt in space, texture and impact. The dazzling possibilities of prepared piano bear fruit to the present day, especially when complemented by the possibilities of 21st century technology.

Stavros Gasparatos’ Expanded Piano project is a case in point. Using Max for Live and a two-tier 24-channel speaker array, the Greek composer has come up with a prepared piano piece which places his audience within the piano itself. Check out the video below for a taste, headphones highly recommended.

Unlike his avant garde predecessors of the last century, Gasparatos installs no foreign objects in the piano, or ‘preparations’ as they’re known. Rather, a finely tuned array of microphones capture the myriad spatial nuances of the piano and pass them to the computer, which then triggers prepared sounds and processes the live piano simultaneously. Contact microphones capture impulse responses from within the piano itself and construct frequency filters based on the results. Each filter then sculpts one of the 24 speaker channels so that each speaker amplifies a specific point from inside the piano and projects it into the audience.

Expanded Piano is set for a full release through Ad Noiseam.