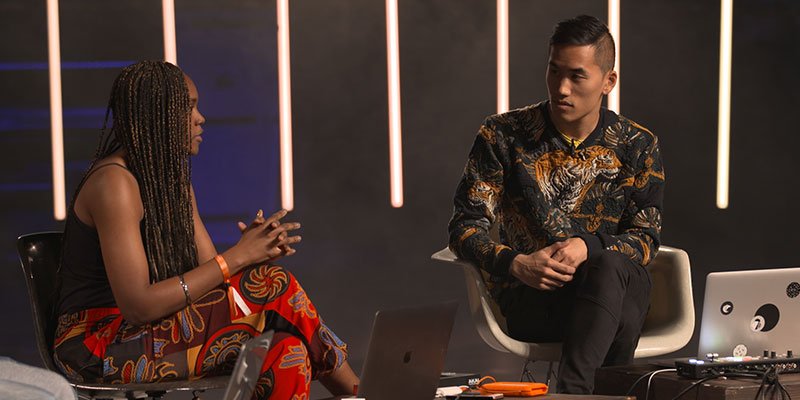 Some of the most popular videos on Andrew Huang’s YouTube channel are episodes of the “Four Producers Flip The Same Sample” series. These videos do a great job of illustrating how artistic journeys can be radically different, even if they start at exactly the same place. This notion was one of the ideas we wanted to explore at Ableton Loop 2018 and so, in collaboration with Andrew, we presented the worldwide music making community with the Start Here sample challenge.

On the first day of the Loop weekend, we uploaded one sample (by UK producer Flora Yin-Wong) and challenged music makers worldwide to make a 90 second piece that would then be listened to and discussed at a live-streamed Loop event. The catch: the Loop event would take place the following day and there was only 12 hours to make and submit a track.

In those 12 hours we received an incredible 800 submissions from all around the world! The next day, Andrew Huang was joined on stage at Loop by fellow music-makers Ebonie Smith and Nick Weiss to listen to some of the submissions and discuss and demonstrate how they made their own Start Here tracks:

Check out Andrew Huang’s own video about Start Here:

You can hear all 800 Start Here sample challenge submissions on our YouTube channel via the Start Here playlist (best listened to on shuffle).

While listening back to this huge volume of material we noticed something interesting; above and beyond each track’s individual sound and overall character, we were able to make out a few trends and tendencies in the ways that people were working with the source material. And so we’ve assembled a few playlists with prime examples of some of the main approaches we were hearing.

For instance, there were a number of submissions that paired the sampled material with acoustic instruments:

Then there was a relatively small but notable contingent of musicians who included sung, spoken or whispered vocals in their compositions:

Perhaps unsurprisingly, we heard quite a few submissions in which the composers used the percussive elements of the original sample in order to produce pieces in which rhythm take center stage:

Many of submitted tracks made audible use of the atmospheric nature of the original sample and came up with pieces that featured some rather interesting textures:

But of course not every submitted track fell neatly into one of the above categories. In fact, the majority of tracks sounded like the result of a combination of approaches, techniques, personal preferences and proclivities. And so we finish up with a few assorted pieces that demonstrate how no two artistic journeys take the same route even if the starting point is the same: