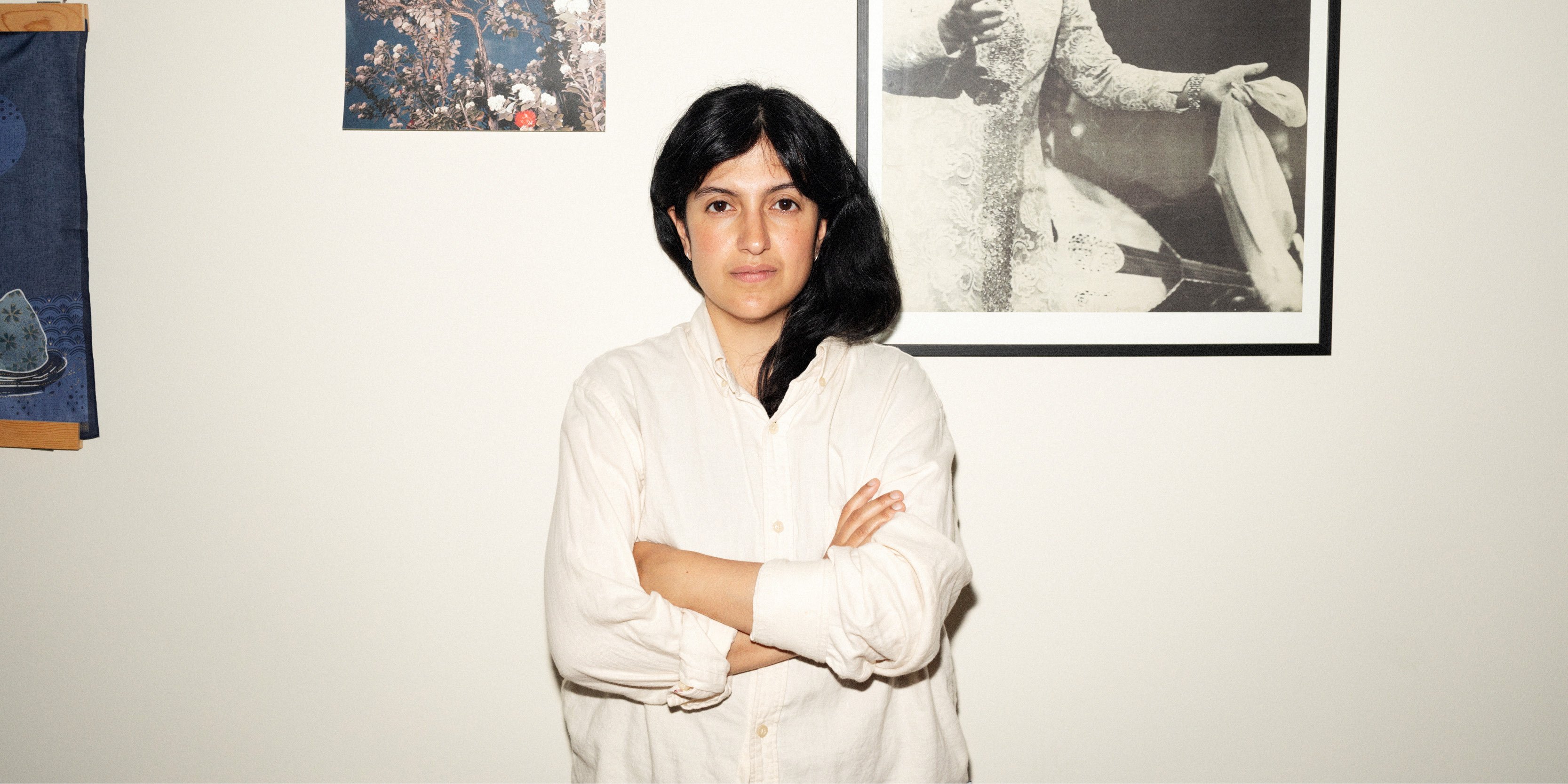 It's not uncommon for music makers to draw inspiration from other artistic mediums. Our seemingly random creative detours often have a way of connecting and making sense in the future. This couldn't be truer for Shida Shahabi, whose career as a musician and film composer has been shaped by her experiences across several other disciplines, including visual arts, sculpture, and cinema.

“I’ve gone through different phases”, she recalls. “As a child, I studied piano. When I lost motivation with music, I went to study fine arts. This was a good space for me to experiment with different methods and materials. Though it was my professor who eventually said, ‘I think you are still into music and that you’re finding your own relationship with it.’ I think he was right.”

During her time at the Swedish Royal Institute of Art, Shahabi worked as an editor’s assistant, gaining the experience and confidence to create her own art films. Gradually realizing she was still interested in sound, she began leaning more toward sculpture and sound installation projects. Eventually returning to music, Shahabi sought to simplify her practice by stripping it back to its fundamentals. The result was her 2018 debut album Homes — a widely acclaimed octad of intimately recorded piano solos.

“For Homes, I was trying to create something that wasn’t typical of other piano works. I played my 100-year-old upright made by Swedish piano maker J.G Malmsjö. I think the age of this piano and its not-so-perfect health is a big reason why it sounds the way it does on the album. I liked the detailed, close-up mechanical sounds that it made. So that became the core of the whole record. My method was similar to the process of field recording. We placed a couple of microphones very close to the hammers, some underneath the keyboard and some at the back of the piano. When editing and producing the tracks, we went through each microphone recording. In the end, we didn’t use all of them, we only used the ones that sounded interesting and stirred curiosity in our listening.” 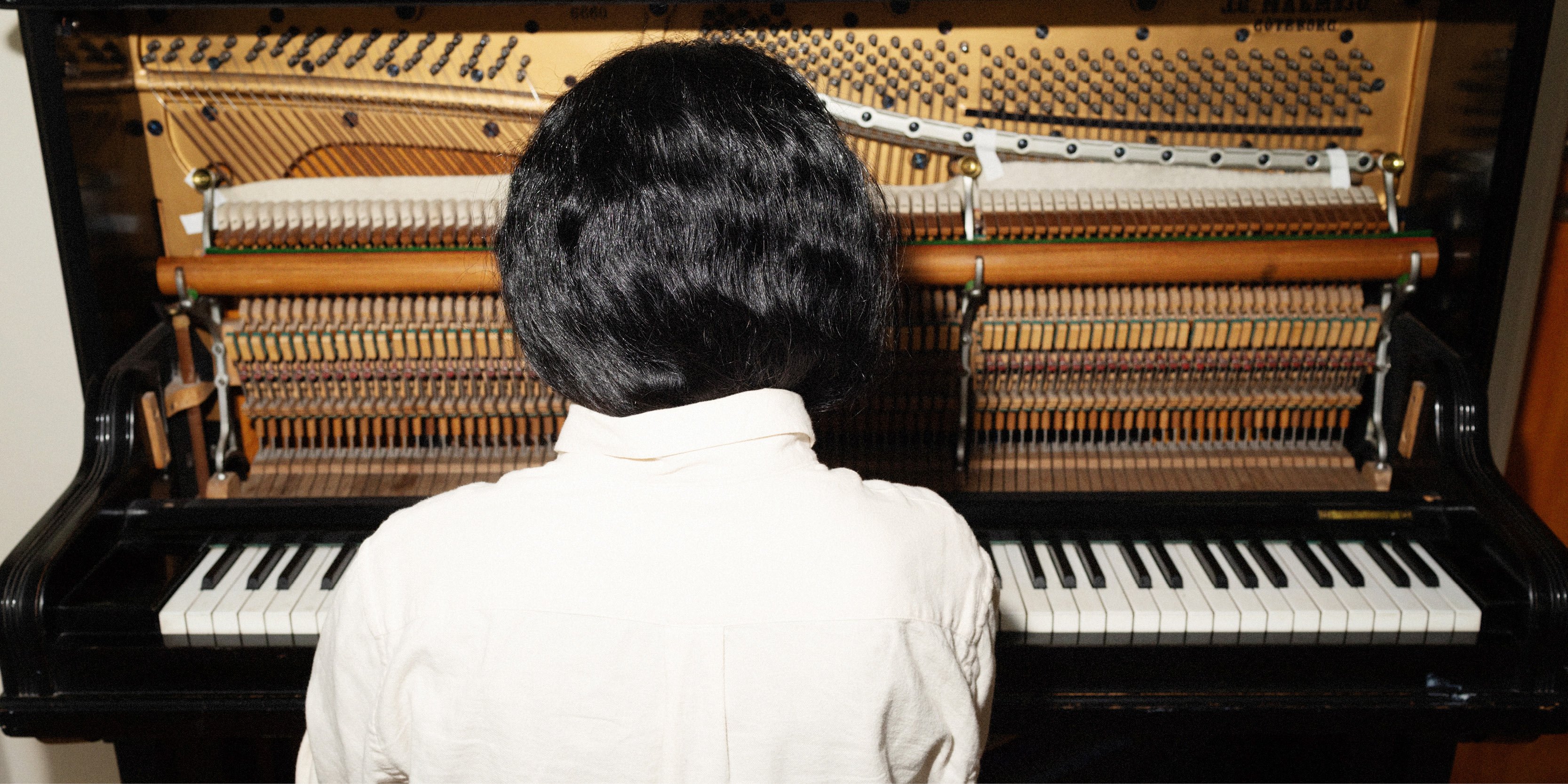 “…I was making Beethoven slower, darker, and more meditative.”

Shahabi’s 2021 rework of Beethoven’s ‘Piano Sonata No. 26’ carries a similar quality of intricacy and detail. The recomposition, named ‘Cloud No. 26’, is based on excerpts from the original piece, with looped phrases and expanded chords. “When I was first asked if I wanted to do it, it was quite scary because it’s sensitive to rework one of the biggest composers ever. I was interested in zooming into the piece because it's quite long and its melodies are varied. I was seeing it like an audio file that could be time-stretched. I took out interesting parts and expanded them into ambiance or drones. I combined them with other phrases that moved me in some way while listening to the original. I was making Beethoven slower, darker, and more meditative.”

Shahabi describes much of the music she’s released as “quite acoustic”. But as an emerging film composer, she’s been able to explore a more sound design-oriented side to her work. In her score to Maria Eriksson-Hecht's ‘Alvaret,’ she moved away from her piano, instead choosing to perform with synths and a baritone guitar, alongside Linnea Olsson on the cello.

‘Alvaret’ is about a young girl trying to help her father come to terms with the loss of her mother who died in an accident. Shahabi’s melancholic and sometimes haunting score reflects the characters’ experience of revisiting their trauma as they pass through the place that still troubles them.

“What I immediately picked up on was the codependent relationship between the father and his daughter Alice. After the accident, the father goes into a deep depression and Alice becomes his caregiver. But they are struggling and trying to show the social services that he isn’t dysfunctional because they still want to be together. Alice is a very strong character, but at times you get a bit scared of her as well. I wanted to enhance that with the music. Also, the film is set in Öland where the landscape is quite dry and flat. It's very visually appealing and characteristic. So that influenced my writing unconsciously too. It's such a dense and dark short film. You get a lot from those few minutes.”

By contrast, Shahabi’s score for Jennifer Rainsford’s ‘Lake on Fire’ mirrors the extraordinary world of a forest made by artificial intelligence. It’s a forest that makes sounds. It talks and changes color. People turn to the forest for answers to their personal questions. “Jennifer and I had a lot of talks about how she wanted the AI to sound”, she recalls. We were very focused on this tree because it was the centerpiece of the AI. Jennifer was hearing something similar to an organ and I started to think about fugues in classical music. Fugues are a compositional method normally used for organ or piano. The master of Fugues was Johann Sebastian Bach. I liked the idea of trying them. But it's the opposite of how I normally work because fugues have a very logical pattern, they're very repetitive and mathematical — and I’m really bad at maths."

For Shahabi, the collaborative dynamics of film composition present different challenges to her comparatively solitary work as a recording artist. Working on a film score involves at least one other person who needs to feel happy with your work in the end. That can be tricky if you’re used to being a solo artist that creates their own ideas. “I think I’m fortunate enough that the directors I’ve worked with are interested in my music”, she says. “I’ve never been forced to do something that doesn’t come naturally to me. Directors usually weigh in more about technical stuff, like a certain cue in a scene. But sometimes you do have to kill a lot of your darlings. That can be difficult. However, that’s part of the collective process and teamwork. There are a lot of other parameters and mediums that need to get space.” 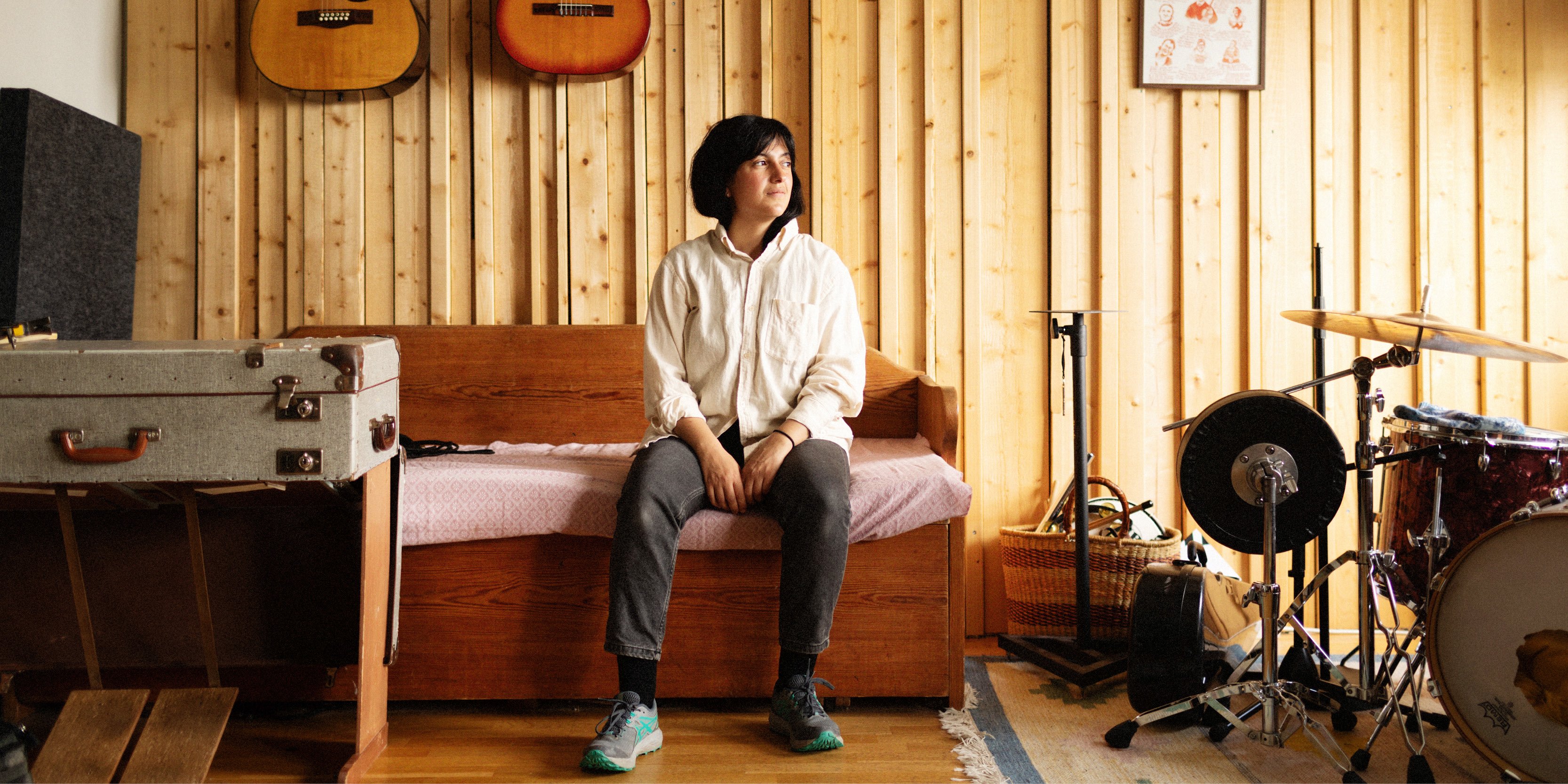 Film composers are also faced with the task of interpreting a script or synopsis from different points in the production cycle. In this regard, Shahabi’s creative strategy is often a non-linear process that typically starts during the scripting phase. “Usually, there is a part in the script that makes me curious. It's never at the beginning or end, it's always somewhere in the middle. Maybe it's a character or a relationship. It can be something general that goes through the whole story. Or a very specific occasion that makes me want to write about the theme. And normally, that becomes the foundation of the general score. Once they’ve shot everything, the music will get a bit more arranged. Because of course then I do get influenced by the tone of the imagery and the expressions of the characters.”

“…Oliveros’ ideas on using your listening as a compositional method will stay with me for the rest of my creative life.”

The role that technology plays in Shahabi’s work is often exquisitely subtle, yet surprisingly integral to her compositional methods. On her earliest forays into music production, she remembers loading random field recordings into samplers and listening to each frequency range while looking for interesting textures. “I do a lot of EQing to isolate certain frequencies and then apply granular modulations. I also like using feedback on delays to create drones through reverbs. Sometimes I can be playing just a couple of notes. Then, after adding some effects or plugins, it becomes something I couldn't have created myself. You need surprises like that sometimes when you write music. It shapes your brain and your listening, which can be necessary. Because you can get tired of your own language and the things you default to otherwise.” 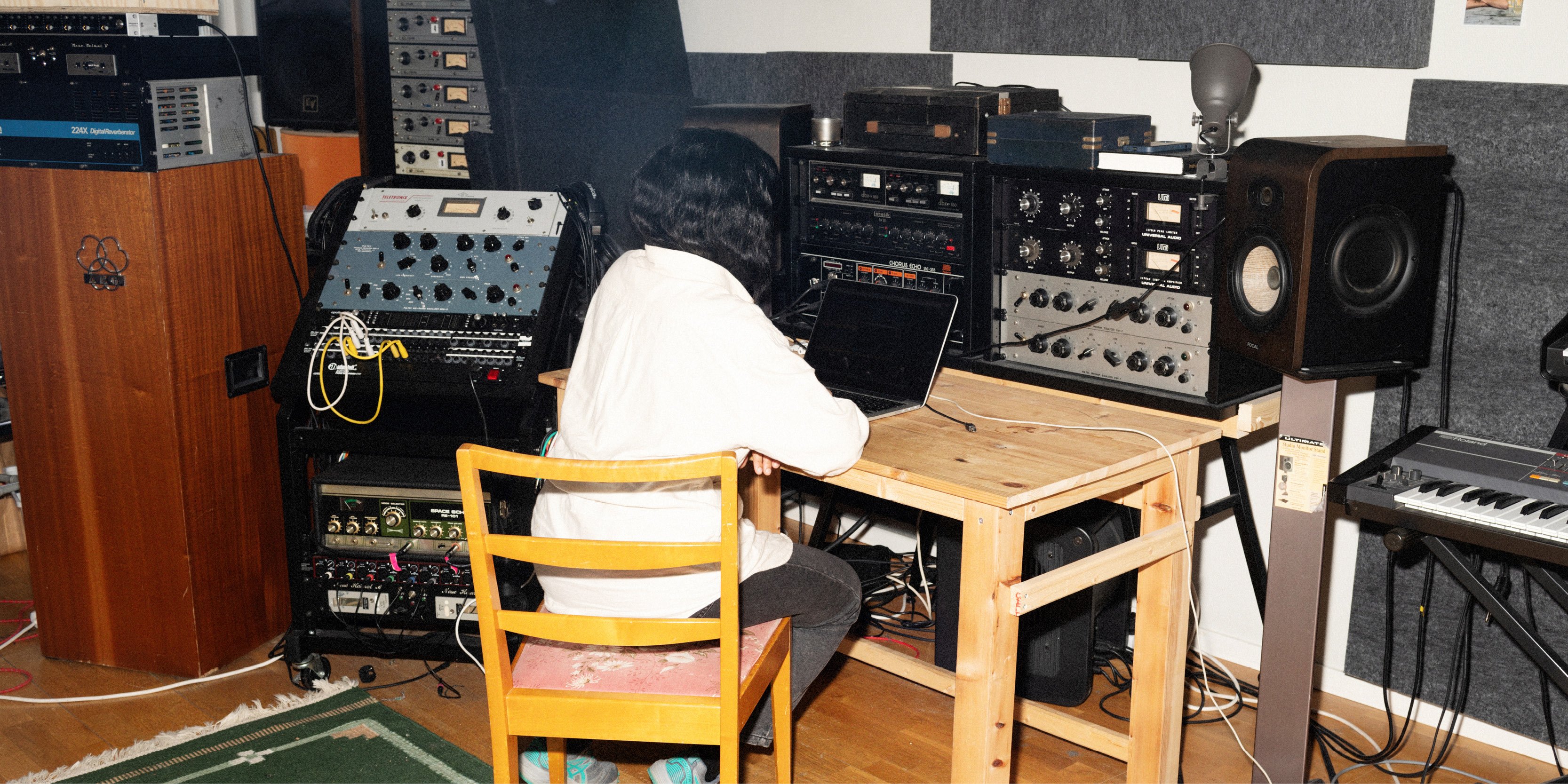 As a child, Shahabi remembers how she preferred to pick up piano pieces by ear, and the importance of listening as a creative tool has only grown over time. One name that always comes up in this context is Pauline Oliveros and her philosophy of deep listening. “I remember when I got to know about her sonic meditation and deep listening methods. They really affected me and have shown up in different phases of my own projects. Oliveros’ ideas on using your listening as a compositional method will stay with me for the rest of my creative life.”

For Shahabi, the process of becoming an effective music-maker stretches far beyond the technical aspects of her craft. It’s a process that requires a holistic mindset and a healthy relationship with all sides of life. She cites the best piece of advice she got as a simple reminder to maintain her health.

“You need to be in a certain state in your body in order to perceive and create music in a genuine and meaningful way. Remember to have the occasional slow day. Try to be present, because everything relates to each other. If you’re feeling mentally down or you compromise everything just so your artistic life can work, I don't think that’s a good recipe.”

Going forward, Shahabi is currently writing a piece for the Swedish dance company ​​Cullberg Ballet. She’s also preparing for some live performances and focusing on the production of her second full-length album. “Things are getting a bit more orchestrated and more arranged than on the previous album. I’m having a lot of fun with it, but it’s starting to get quite defined as I’m getting close to the mix phase now. I tend to get a bit nervous at this point because you can’t change too much from here — things start to become committed. But that's also a special feeling.”

Text and Interview by Joseph Joyce

This article was created in partnership with Composer Magazine. Their version of the article appears here.