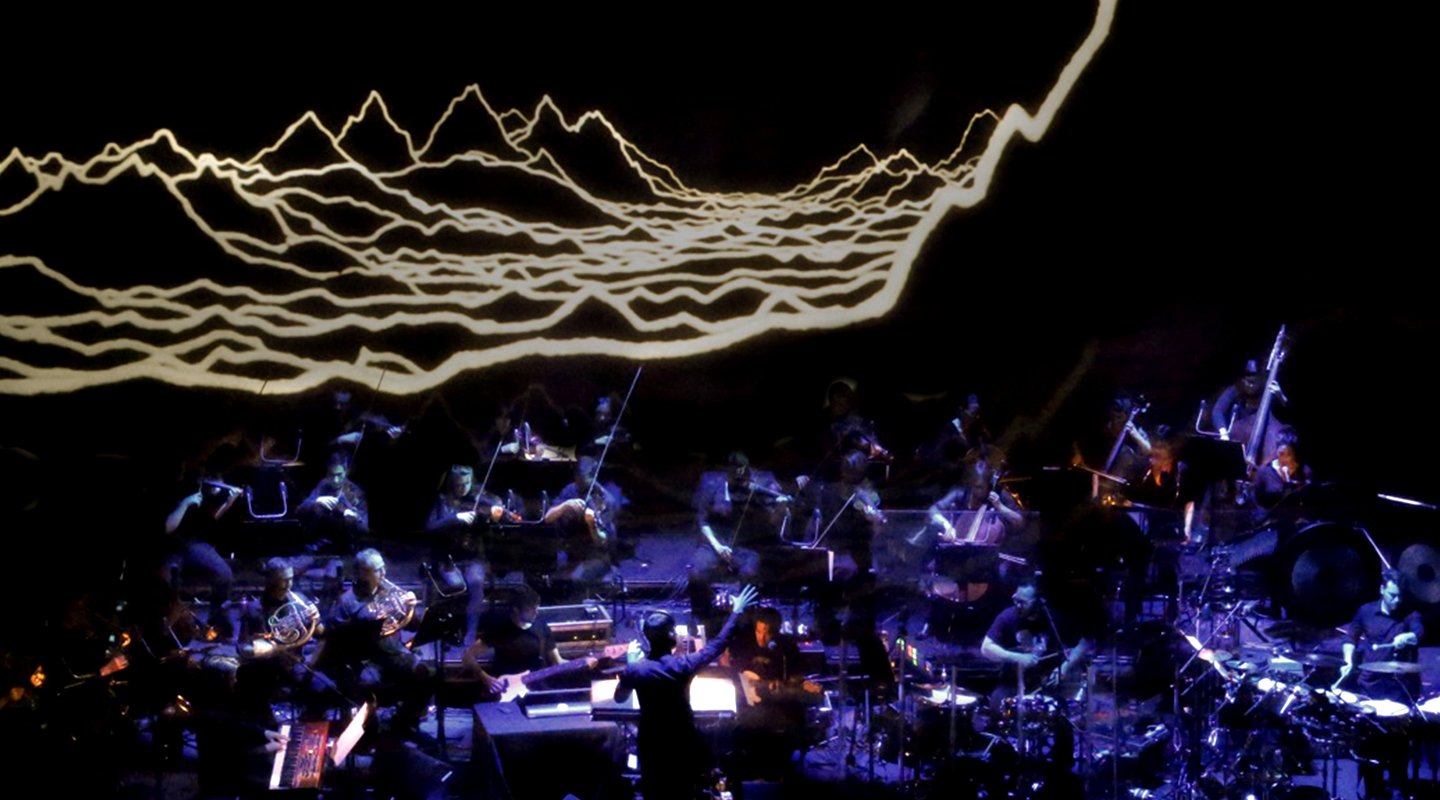 Since their untimely demise in 1980 Joy Division have cast a long shadow over the musical landscape. Their sound – a marriage of punk’s angular energy, Ian Curtis’ stark, evocative lyrics and producer Martin Hannett’s atmospheric treatments – expanded pop music’s expressive range and pointed the way to many of its future permutations. One development the four former punks from Manchester probably didn’t foresee was that an orchestra would one day mount a multi-city tour across the UK, performing electronically augmented versions of their music, playing a score assembled from the memories of another musician.

Fast-forward thirty-three years and this unlikeliest of scenarios is a reality. The Heritage Orchestra, the UK’s go-to ensemble for adventurous musical cross-pollination, collaborating  with electronic music innovator Scanner, are set to start touring the UK with Live_Transmission – an immersive audio-visual concert spectacle based on the music of Joy Division. Aided by visual artist Matt Watkins, Live_Transmission pays homage to the spirit that propelled Joy Division during their all-too-brief existence.

Live_Transmission really begins in the fateful year of 1980 with a teenage Robin Rimbaud (Scanner) listening to Joy Division at a particularly difficult time in his life. “I vividly remember buying my vinyl copies of both Joy Division albums at the time in an Our Price record store in Leicester Square and being undercharged and feeling the trembling thrill of this at the gloomiest moment in reality. Epic, understated, iconographic, grand yet architecturally flawless, Joy Division were a rich part of my youth and have remained so through my own growth.”

When the opportunity arose to work with Heritage Orchestra on a program of reinterpretations of Joy Division songs, Scanner decided to tap the deep well of his own recollections. He explains “...this project is based upon my own memories of Joy Division, rather than traditional cover versions or interpretations, it's more about how I remember the music and atmospheres than strictly and laboriously trying to copy the original songs.”

Scanner adds that this highly personalized approach is, in fact, perfectly befitting of Joy Division’s stature and place in the collective consciousness of pop music. “The audience will be familiar with this music, so even more reason for me to consider not following the more traditional line of covering the songs which have been repeatedly explored over the years by other artists. Much of my work has explored ideas of memory and interpretation and how we each translate, transform and process information through our own personalities, history and identity, especially in our digital age where so much information is exact, unchanging, constant.”

With the conceptual framework firmly in place, Scanner began assembling materials to present first to a core trio of drummer Adam Betts, guitarist Matt Calvert and bassist John Calvert and then to the Heritage Orchestra itself. Scanner describes the process: “To begin I decided to choose a variety of sounds that appealed to my ears and begin creating melodies, rhythms, pulses and textures in Live, NI Kontakt and Kore and a few other soft synths. I used Izotope Iris and RX tools to isolate various vocal clips off the original recordings too, to incorporate them into these demo songs. All of these starting points began purely in my memory, without reference to the original songs.”

“These rather tangled mutations soon began to take shape and I nervously played them to the team as the starting point for the real creation of the show, which were then rapidly translated and remodelled with the assistance of arranger and keyboardist Tom Trapp in Amsterdam, who wove his magical orchestral wand across the pieces. WIth sheet music in hand we (Matt Calvert, Adam Betts, John Calvert and myself) progressed to a real studio in East London to thrash out the arrangements in the real world, moving many of my sounds across to Adam's drum pads and essentially working out what did and what didn't work according to both notes on paper and what our ears told us worked. Remarkably this part of the process was completed in just one day and a little while later we united with Heritage Orchestra and the persuasive skills of conductor Jules Buckley in a much more expansive rehearsal studio and competed with Primal Scream and Keane rehearsing on either side of us to play through the entire set and develop it as it is largely heard today on stage.” 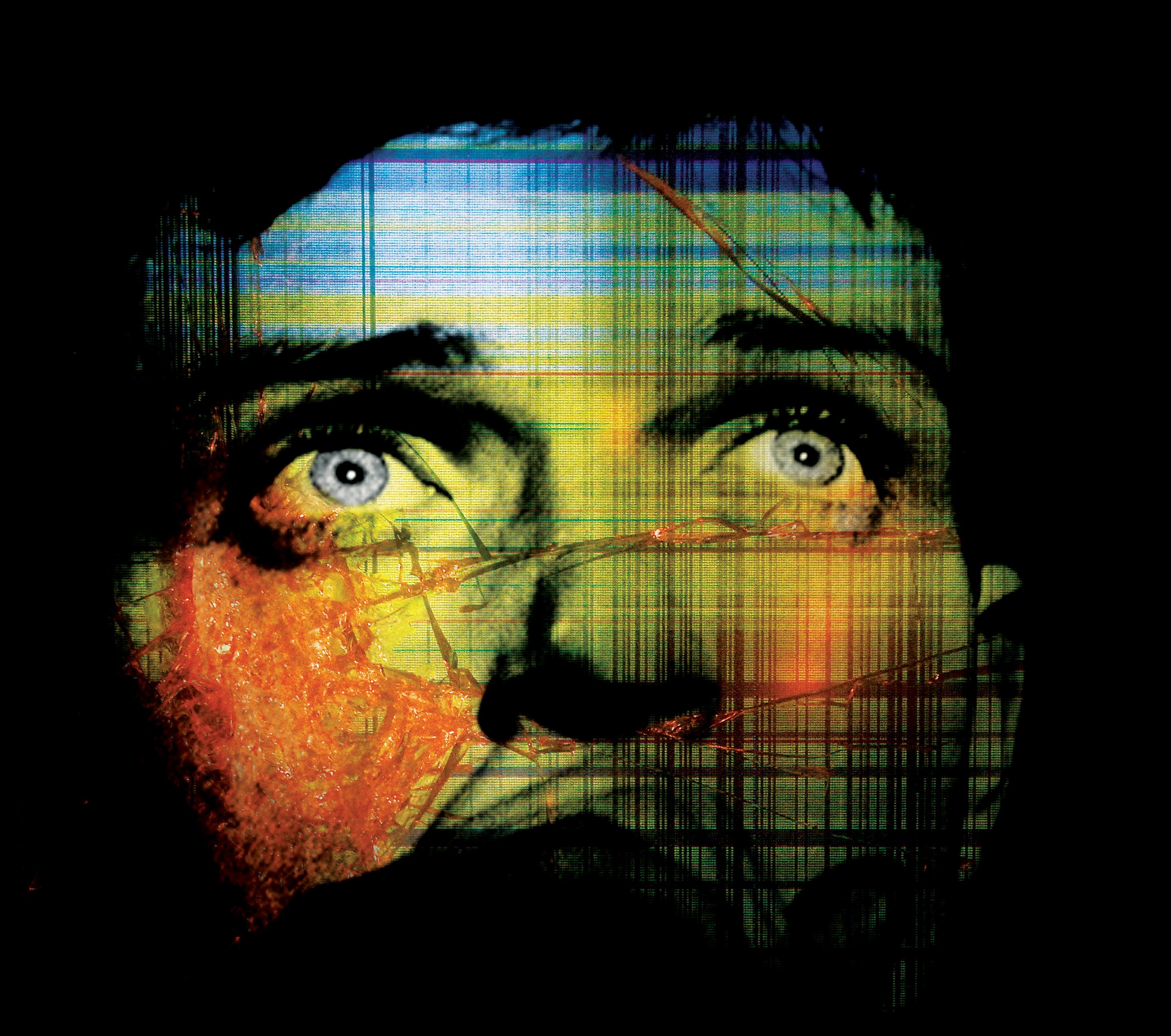 Once Scanner’s electronic pieces had been arranged for orchestra, his role within Live_Transmission shifted from that of (re-)composer to ensemble member. His set-up, though, remained largely unchanged: “Ever the reductionist, I'm only using my Macbook Pro running Ableton Live 9, various Kontakt instruments, Ableton soft synths and Kore 2, with a Novation Launchpad and portable Akai keyboard. I've prepared a series of textures, rhythms, pulses that set off various compositions, or are introduced inside the orchestral arrangements. At various points I trigger vocal samples of Ian Curtis taken from the original recording sessions that we were given permission to use, as well as play melodic lines, fills or riffs as part of the whole. Sometimes Ableton acts as the engine driving the entire ensemble, as in “Atmosphere”, where it creates an almost architectural web of rhythms and beats.”

“Matt Watkins’ visuals are also mixed live to the music and are always developing and changing dependent upon the mood and textures, so each night is different in terms of the interplay and relationship.”

The inclusion of both electronics and an orchestra In Live_Transmission transforms the austere sound world of the original Joy Division recordings into a decidedly lush and expansive musical experience. For Scanner, this is a continuation of Joy Division’s aesthetic trajectory rather than a contradiction of styles: “I think there's a vast difference between the visceral bite of Joy Division live – as documented on live releases and youtube videos – and their finely crafted and sculpted studio recordings. If they had continued then it's quite possible that they would have been already collaborating with an orchestra in this fashion, but that's only conjecture and today all one can do is project possibilities. Live_Transmission is a way of imagining a past in the present. Interestingly, what appealed to me originally working with Heritage Orchestra was that they have been frequently drawn to projects with outsider figures or exploratory sounds in the pop medium, be this with Tim Exile or Aphex Twin. There's an epic nature to our collaboration with this rather daringly fearless sonic adventure but I believe at heart there's a vein of energy in the music itself that transcends all else.”

A good chunk of the responsibility for transporting this energy falls to Adam Betts. The role of drummer with Heritage Orchestra goes well beyond simple timekeeping duties, and so naturally his drum kit is augmented with an array of electronics.

Adam explains: “In Heritage Orchestra my setup is two microphones, one on my snare and one on my floor tom, going into my sound card, into Ableton Live. I have triggers on my kick and snare going into a Roland SPD-SX, with a USB out into my computer, so any drum samples are triggered from Drum Racks in Live. I also have a Kaoss Pad 3 connected two ways - one via USB as a controller for Live, and also with audio out of the sound card to use as an external audio effect.”

”In Live I use a lot of delays, reverbs and bit crushers, and the looping effect from the Kaos Pad, along with percussion on the kit - cowbells etc. Recently I've also gotten into Max For Live, using multiple instances of the LFO plugin to add more organic development and variety to the sounds. My biggest goal with electronic drums is to give that organic variety that you get with a real kit with no two notes being totally identical, so I use a lot of LFO's to add variety to pitch, reverb length, delay speed or feedback. Stuff like Autechre and Aphex Twin –  their percussive, organic developing drum parts are a real inspiration.”

”Most of the samples Scanner has given me have been individual samples – a snare drum or a kick sample, which I then trigger from the kit or the pads to build grooves. The textural parts Robin provides live.”

”Being the drummer in an orchestra like this is a curious situation; I come from a loud background of rock, punk and electronica, so working with instruments at an acoustic volume is a real challenge. The aggressive Joy Division feel doesn't work at the level of a violin (at least that's what I say!), so the mic-ing, monitoring and isolation have to be really well done, using in-ears and wedge monitors combined. This means that playing as part of the orchestra becomes pretty tricky in terms of hearing everyone, and maintaining time. Often, when the rhythm section are playing time, Jules Buckley (our conductor) will take the time from us and lead the orchestra accordingly. Funnily, where I always thought the beat was in an orchestra (at the bottom of the conductor's stroke) turned out to be not right at all – for the orchestra it was about halfway up again. That'll always be my excuse for rushing away from the orchestra!”

For guitarist Matt Calvert, the attraction and the challenge of the Live_Transmission project was in capturing the emotional space opened up by Martin Hannett’s production of the original Joy Division recordings. Matt says: “I'm really into how they helped expand the vocabulary of what a rock band with vocals, guitar, bass and drums (with a little synth thrown in) can sound like. Every element was really considered and pushing conventions of even punk, using musical ideas and technology. In fact, what I'm drawn to most is how the production enhances the emotional content. I think at the time Joy Division bassist Peter Hook wasn't that into Martin Hannett's production, but for me all the reverbs just seem to help darken the emotional tone on tracks like Heart and Soul, for example.”

Counter to the idea of a faithful cover version and in keeping with the notion of “imagining a past in the present”, Matt explains that, sonically speaking, the aim of Live_Transmission is “...perhaps not so much to recreate Joy Division’s sound specifically – although in places it'd almost be rude not to use a slightly Peter Hook sounding bass guitar, reverb-y guitars a la Bernard Sumner on “Transmission” or “Dead Souls”, or Stephen Morris-esque drum parts. But really I think our interpretation carries on a tradition of challenging what a band can sound like. John (Calvert) is actually running his bass into a customised synth setup so he can flit between bass guitar sounds or use it to trigger a Moog Slim Phatty. Adam (Betts) augments his kit with various triggers and and mics on his kit for live processing via Ableton Live. I mostly have lots of pedals for my guitar and synths, so if you took the orchestra away, it would reveal quite a contemporary sounding version of a guitar/synth, bass & drums unit, especially on our versions of “Digital”, “She's Lost Control” and “Isolation’ – part conventional band, but also emulating lots of electronic and sequenced music. I think that's almost the best way we could  respect the production aspect of Joy Division.”

Putting in perspective the various technical and aesthetic considerations that went into the project, Scanner reflects: “it is about music but then again it’s far beyond music.” But in a deeper sense, for him, for the Heritage Orchestra and for the audience, Live_Transmission is ultimately an engagement with “issues of the transience of sound, how many things simply vanish in time and how perhaps melodies might silently continue as final witnesses to our human existence on earth.”  What could be a more appropriately transcendent homage to the legacy of Joy Division?