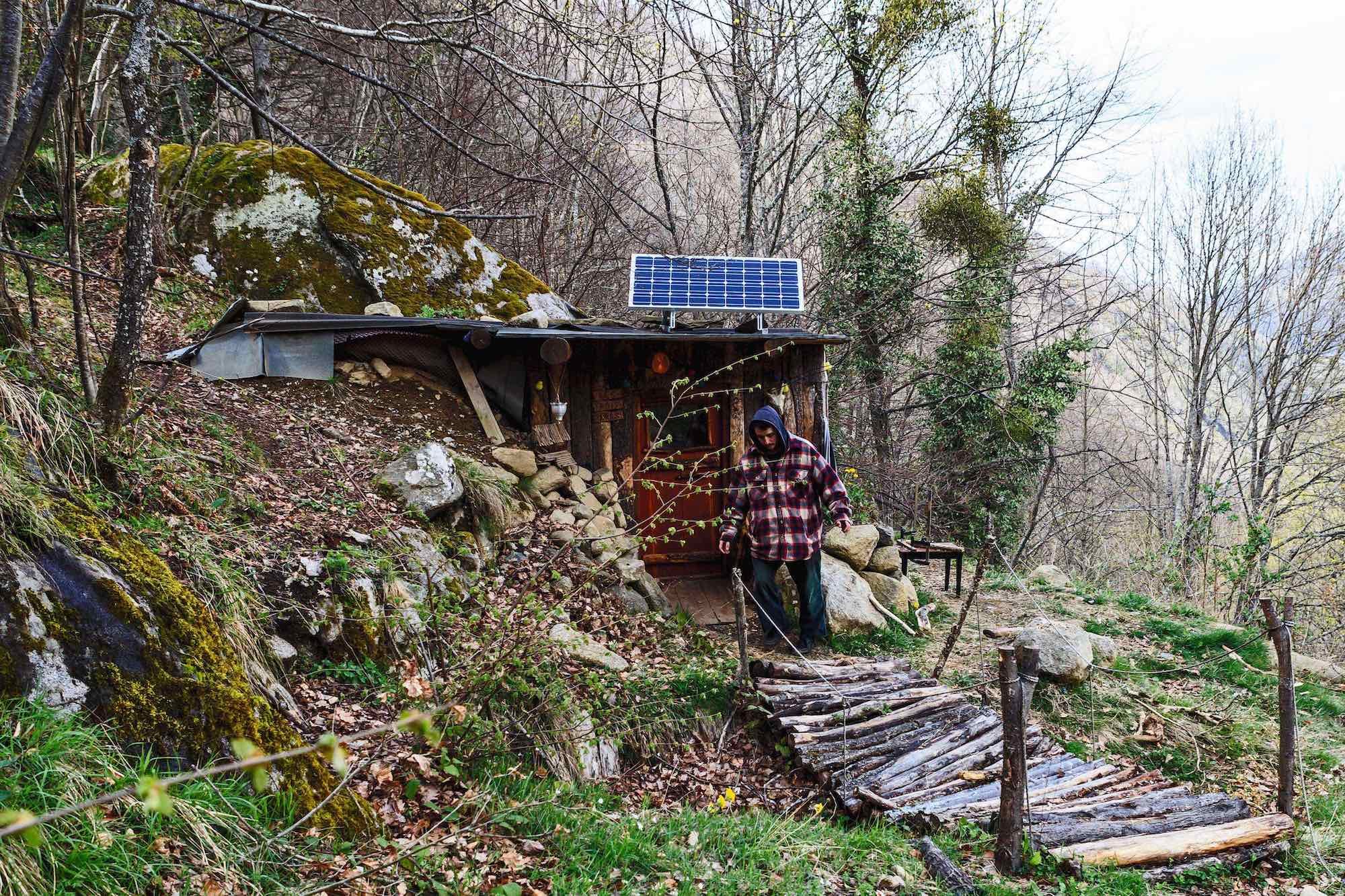 DIY, or do-it-yourself, is a way of doing things that emphasizes independence and the handmade. The term originally came from the do-it-yourself home renovation trend in the US and UK in the 1950s but was later taken up by the hippie counterculture of the 1960s and subsequently, by 1970s and 80s punk and indie movements. It was through these later cultural repurposings that the term and practice of DIY acquired its explicitly political connotation – as a badge of authenticity and an alternative to mass manufacturing and mainstream consumer culture. Artists working with a DIY approach frequently experimented with new or alternate forms of production, presentation and distribution of their work including zines, mail-order catalogs, independent record labels, artist books, pop-up stores, artist-run studios, venues and even architecture that blurred the lines between living and working.

S8JFOU’s track “Influences” was made using only Operator and Echo, while the video was made entirely with Max for Live.

Nowadays, in the world of electronic music-making, the possibilities to work in a DIY manner are many. The basic tools to start making music are largely affordable (or can even be found for free). And thanks to open-ended platforms such as Max/MSP, Pure Data, Reaktor, Touch Designer, Arduino, Raspberry Pi, independently-minded creators can build their own software and hardware according to their own needs and interests. Of course, the trade-off in refusing ready-made devices and off-the-shelf solutions is a necessary investment of time and energy to learn how stuff actually works. Then again, there are more resources than ever that freely provide the knowledge and training needed to build one’s own tools.

One artist who is pushing forward in the tradition of DIY self-reliance is French producer  S8JFOU. The name is a play on the phrase “Suis-je fou?” (en: Am I crazy?) and is an apt alias for someone whose unusual path through music (and life) have led him to continually reevaluate his relationship to the tools he uses and to music-making in general. We caught up with S8JFOU, currently residing in his self-built cabin / studio in the Pyrénees mountains for a chat about the origins and consequences of his fierce independence, his views on software vs. hardware, and his latest album Op•Echo. Plus, S8JFOU has generously shared four of his own custom-made Max for Live devices.

Requires Ableton Live 10 or higher and Max for Live or Max 8.

S8JFOU demonstrates Probee, Potee and Premo, three of his free Max for Live devices. Watch all three videos in the playlist.

A strong element of DIY runs through all your endeavors – your music, your Max/MSP programming, your synth building, even the home you built for yourself. Were you always an auto-didact or were there some teachers who played a role in your development?

Since childhood, when something got my attention, I would immediately dedicate my whole life to it. Then, something different would get into my head and I'd drop everything for that. There is no school or teacher that wants a child that’s attentive for only 30 minutes and then someone on a homemade minibike goes past and they’re gone for the rest of the year in a garage building their own minibike. So, despite wanting to for years, I’m mentally not able to understand and learn in a dedicated place with professional teachers. Fortunately, the internet exists, and anyone can learn things by making them. So I found my own school at home, and it was free!

S8JFOU building his own cabin / studio in the mountains of southern France.

Among your projects is the solar-powered cabin you built in the mountains a few years ago. How does making music work there? What is a typical day like?

In my cabin, because I’m mostly there during the winter, the starting point is always to make a fire in the woodstove. I have the most basic solar power system, which cost me less than 500 EUR, and I only use it for two extremely low-power USB lamps I made myself, and for charging my computer. I’ve never had a smartphone, and I use hand-powered tools for building anything or chopping wood.

My music setup is basically Ableton Live & Max/MSP on a laptop. I’ve always worked with headphones so I don’t have any speakers to power. I have a soundcard with different microphones for recording things. In the first two years in my cabin I had an old acoustic piano but the wooden body cracked and the piano just died. I have my pocket trumpet, a really small USB keyboard, a single USB potentiometer I made, and that’s it. 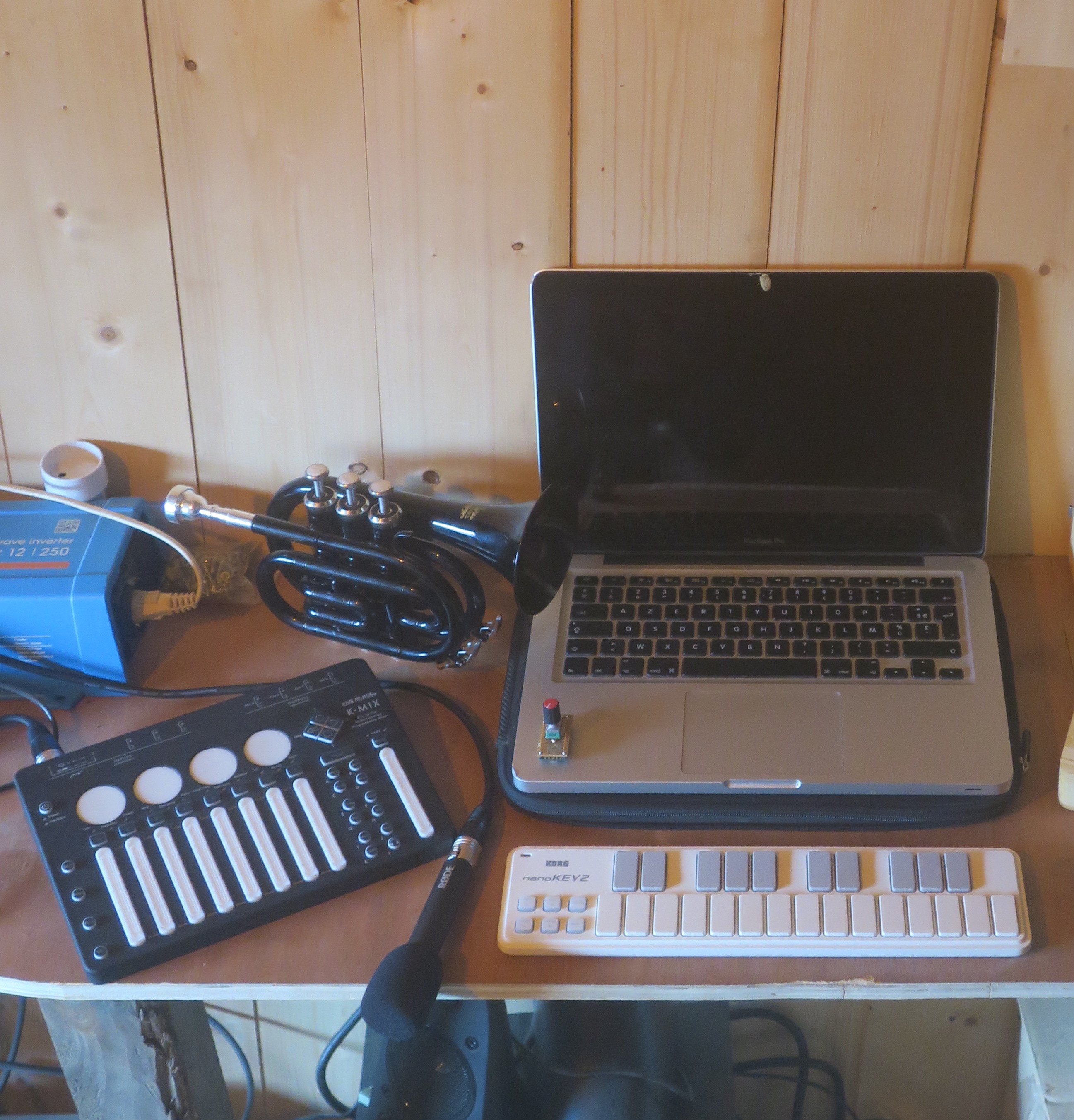 All the gear S8JFOU uses in his cabin studio.

There is no typical day, because if it’s snowing I will go for a sled ride for sure. Sometimes I prefer to work outside, making a chair, a new handsaw, or a fire pit for when some friends come to visit. There is always something to repair or make better. Other days, I’ll be deep in a music project or a new Max for Live device and I’ll spend the whole day and night on it. On those days, my greatest fear is clouds, because with a week of cloudy weather I can only charge my computer every two or three days.

How and why did you start making your own Max/MSP and Max for Live devices?

I started to work on Max/MSP after I made digital hardware synths using the Axolotl-Patcher environment. I was already done with hardware stuff – I spend too much money and time on modular synths only to ultimately realize that I can reproduce most of these modules myself for free. Axoloti Patcher is much simpler than Max, but you can’t hear your work without the hardware board. So that was the perfect bridge for me to get into Max for Live first, to extend my years of practicing Ableton Live and finally making the tools I always dreamed about. From there, I went deeper into Max and used it outside of Ableton to create my own musical environment.

One of S8JFOU’s Max creations, “Friend” is a probability based synthesizer and generative composer with an interesting backstory. Available for free from S8JFOU’s website.

On your website you describe a sort of love affair you had with hardware synths – you even built synthesizers for yourself and others for a while. However, your new album is made entirely with software. What is your relationship now to hardware vs. software?

For some years I was fascinated by synths and hardware instruments. As with many musicians of our century, the computer didn’t seem to be the best tool for music production at first. It was more fun to tweak knobs and have the feeling of being more "professional" with a real studio. But I was wrong. When I started collecting hardware I ignored everything about sound synthesis. Modular synths taught me the basics, because you have no choice but to figure out what to plug in where if you want to make music.

Then, while making digital hardware synths, I came to understand that 95% of my eurorack modules were in fact programmed on a computer and uploaded to microchip. So I realized that my computer was the most powerful music instrument I’ve ever had and will have. I had no need to buy anything else because everything was already in the computer – and if it wasn’t, I could create it. So I sold almost all of my hardware to focus on Ableton Live, Max MSP and Pure Data. I’m now also learning Javascript and C programming language.

“Waves” from the album Op•Echo. Animation by D8CH with knobs, keys and faders controlled by S8JFOU via Max for Live.

Speaking of software, for your new album, Op•Echo you made the whole thing using just two devices, Operator and Echo. Why did you decide to work with this kind of constraint?

It was an exercise I did on my last album Cynism in 2020. The track “Analog Things” on Cynism was made with Operator and Echo only. Initially, my idea was to make fake analog percussive songs rather than going deep into FM synthesis and the power of Operator. But it was such a pleasure working this way that I made a new track, and another one, and then within one month I had a whole album – and it was really fun to do. Faking spring reverb with Echo, analog buzz with both Operator & Echo, it was like finding sideroads and secret passages inside my perception of what a simple tool can do. It just gave me another mindset when I try a new program or plug-ins, and it also reinforced my convictions about going back to 100% computer.