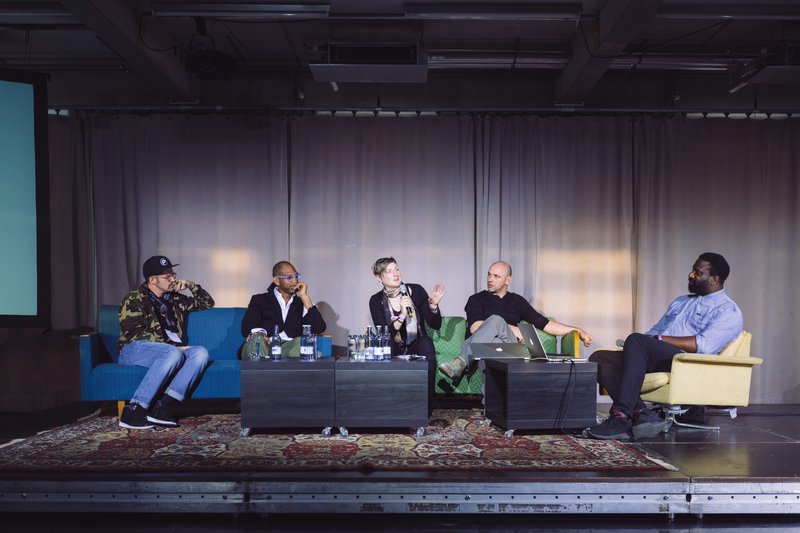 The loop, by definition, always begins again, seamlessly and reliably. Music based in repetition comes in many varieties but the immediate satisfaction and certainty of a phrase resolving is common to them all. From the tape experiments of musique concrète to the repeating drum machine patterns of techno, the loop has always been a distinctive aspect of electronic music. The somatic effects induced by repetition – head-nodding hypnosis, time-dilated euphoria – are arguably what clubbers at Berghain and fans of Steve Reich have in common. In the case of the sampled loop, an added cultural-historical dimension opens and draws the listener into a wormhole to other times and sounds.

‘Loop’ is of course also the name of the summit for music makers Ableton first put on in Berlin in late 2015. There, at a panel called “Again and again and again and again” – co-presented with CDR – that the trio of producer-DJs Henrik Schwarz, King Britt and Recloose spoke about creating and finding source material for loops. In their individual presentations and track selections, the three dissected the deceptively simple functionality of loop­-based music and the infinite possibilities that exist within the finite loop to bleed through barriers of genre, context, tempo and prescribed structures. The fourth speaker on the panel, Hillegonda Rietveld, Professor of Sonic Culture at the London South Bank University, presented a further perspective of the loop as a fundamentally paradoxical resolution to a present that no longer exists, and how it functions to drive towards peak and rupture.

For both Henrik Schwarz and King Britt, loops frame the energy and texture of live performance, and in the studio, writing loops is a ritualized form of practice, and provides the fundamental materials for composition. Britt offered insight into his 'loop Mondays', a weekly six-­hour studio session that involves him exclusively writing loops of varying lengths, and only keeping those he can endure listening to continuously for more than 10 minutes. The surviving loops are used later for Britt’s productions and DJ sets.

Britt demonstrated the results of this discipline by playing "The Hour", a new production released under his Fhloston Paradigm moniker on the esteemed Hyperdub label. Influenced by Philip Glass, Terry Riley and DJ Premier ­– all artists whose production principles are based on repetition and cyclical movements. The piece doesn't feature any drums, but in this setting too the loop is a certainty; a hinge for the less easily predictable rhythmic shifts and changes. Previous releases under this pseudonym leaned on the kick drum more heavily, but the practise of arranging interlockable loops in varying time signatures was always a constant.

Henrik Schwarz' chosen loop, his 2014 production "Lockstep", takes a similar approach of shifting and interlocking loops, but here the techniques are applied to the percussion programming.

"This track was kind of an experiment for me," said Schwarz, "I was always interested in African polyrhythm and I read books about it find out what was going on, but I didn't really find out. Then I had the chance to work with Kahil El'zabar, a fantastic African percussion player. In one of the sessions I said, 'Kahil, can you explain to me how polyrhythm works?' He said 'Well I can give you an example'. He showed me the so-­called baya rhythm which is a very simple loop, it's not really polyrhythmic but it works by shifting the one to another place. You can create hundreds of different rhythms with a tiny little thing." "The possibilities are endless, and it gets even more interesting when you starting shifting that in real time," he continued. "It's all based on a very simple loop, but it's a very smart loop, and when you find that smart loop you can make something very complex out of it."

A demonstration of the Baya rhythm

Referring to a separate Loop lecture-performance conducted with Norwegian jazz musician Bugge Wesseltoft, Henrik went on to detail his attitude towards looped percussion programming; Schwarz advocated breaking with the strictures of matching BPMs and instead opening up to the possibility that unsynchronized elements will intersect at interesting points. "The BPM runs at a random speed in a way," said Schwarz. "I might set 120 and he's playing at 65, and you get this very interesting shift in sound. Very often it's just noise or it doesn't make sense, but there's always a point when you have a loop or a drum loop going over a solo when you think 'ah, that was good'. Because somehow the beats and melody go together in a nice and new way."

At this point, Recloose aka Matthew Chicoine, pivoted the focus of the discussion to sampling – next to synthesis and sequencing, arguably the most fundamental technique of modern electronically produced music. In terms of function, hip hop's sampling of vintage drum breaks, DJ-­friendly edits of disco tracks, and house and techno's sampled vocal and melodic snippets all work by isolating elements from pre-existing recordings and importing them into new, sometimes, radically different settings. In this way samples not only fulfill discrete musical functions within songs, but also serve as portals into different times and places, at times engaging the producer and listener into a musical dialogue with history itself.

"It's all based on a very simple loop, but it's a very smart loop, and when you find that smart loop you can make something very complex out of it." – Henrik Schwarz

Recloose played “Stop And Get A Hold Of Yourself” by Blue Magic, a lush slice of mid-70s Philly Soul back to back with a track he was working on – a propulsive, synth-heavy house production that incorporated a sampled, looped section of vocals from the Blue Magic song. As the track played out, Recloose reflected: “In the 80s it was perfectly acceptable to take an 4 bar loop, repeat it endlessly, and that was your song. As samplers got more sophisticated so did people’s sampling technique and they began doing more with it. There’s any number of ways we can make a loop more interesting, you can shift the starting point, layering loops of different lengths to see how they start to intersect, reversing, filtering, cutting little bits out, transposition. Loops can get quite boring so I always challenge myself to find interesting ways to get more out of that loop.”

Unfortunately, at the time of writing, the Recloose track we got to hear at the Loop summit remains unreleased and so in its stead, here are a few examples – from many thousands of possibilities – of tracks whose sampled and looped source material gets truncated, warped and manipulated in various ways but still retains some essence of its previous existence.

Brandy –­ I Wanna Be Down

Slade to Neil Innes and Son to J Dilla

Neil Innes and Son - Come On Feel The Noize

The ability of a good loop to create a sensation of timeless hypnotism from the same source material and retain some of this essence through multiple mutations was a point of consensus among the four panelists. It was observed that even without having been sampled, certain repeating motifs take on a meme-like existence and are capable of engendering offspring in different times and genres – as the track genealogy below demonstrates:

A rearranged version of the syncopated drums and repeating clavinet/bass line of Herbie Hancock’s "Chameleon" provides the basis for Beck's "Cellphone's Dead" vocals to lay against. One generation on, Ricardo Villalobos’ bootleg remix of that track layers the vocals of the rap section against skittering percussion and a four to the floor pulse. Although neither the characteristic riff or groove of “Chameleon” are to be found in the Villalobos production, one can hear the grandfather track’s DNA manifest itself at the level of texture, density and in the interlocking cycles of its bass and percussion programming.

For musician and academic Hillegonda Rietveld, the necessity, inherited directly from disco remix and DJ edit culture, of dance music productions to keep a crowd transfixed and hypnotised on the floor induces a sense of stepping out of linear time. However, no two loops are equal, as illustrated with her sample of West London broken beat.

Rietveld emphasises that each loop is a progression forward, uniquely located in relation to the loops that fall on either side of it in the track's timeline. And what the twinned sensations of forward motion and circular motion create is a spiral: harnessing the otherworldly hypnotism of the cyclic movement, but ultimately turning the listener-dancer around to another new starting point.