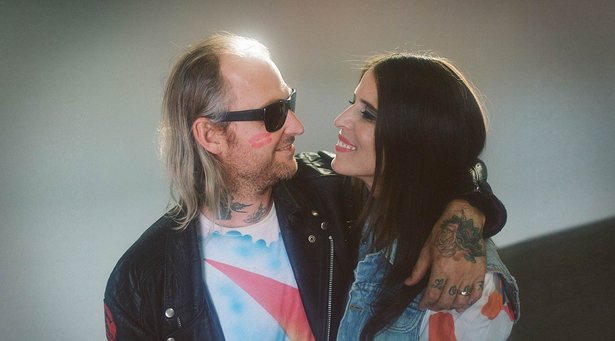 Peaking Lights, aka husband and wife duo Aaron Coyes and Indra Dunis, search in the dirt for gold. Plundering the discarded detritus of outdated electronics to build homespun sound generators, their murky, intimately dubbed-out style is the product of a hands-on DIY attitude to creativity. Combined with a down to earth pop mentality, records such as last years’ Cosmic Logic tow a fine line between tradition and innovation. After being greeted by one of their young children via Skype, Coyes talked us through the duo’s transition from tape-synched performances to Live-powered sets.

Peaking Lights perform "Midnight (In the Valley of Shadows)"

So I have to start off by asking about that Frankenstein synth in the briefcase. It looks like a radiated Casio.

I don’t know what the brand is but it’s not a Casio. I set it up to be kind of like a modular. All the little EQ knobs turn things on and there’s potentiometers for different effects in it.

So you’ve a background in circuit bending?

No, I just kind of figured it out over the last fifteen years.

Have you ever blown anything (or anyone) up?

Well, you know the best accidents are the good ones, but I’ve done stupid things like put a live wire in my mouth by accident. I’ll just grab something with my fingers instead of using wire strippers. I’ll rip out the wire and just strip it with my teeth.

The briefcase is a pretty nifty addition.

Yeah, it’s perfect for touring. I always want to have everything contained, to try make things smaller. I’m definitely influenced by EMS, you know? The Synthi stuff. I could carry it on to flights, I didn’t have to check it. All of the homemade synths stay at home now. They still work, but they’ve taken a beating.

Peaking Lights build a synth out of plundered electronics

I don’t see a laptop in the older footage of you guys. How are you holding all these unstable ad hoc synths in check?

At that point it was all analog, so we were using cassette tapes for sequencing. You can use tapes for clocking, too. Have you ever heard a MIDI signal? It’s just like a beep, a little click, you know? So we’d record that on to a tape.

Is the synth building process fuelled by a desire to create sounds that are truly your own?

Well, I mean that’s the idea. I have a friend who does that video series called Soundbuilders. He came to our house and chilled while I built a synth for them. I hadn’t seen this friend for a while and he saw our new set which uses Live to do all the sequencing that we used cassettes for back in the day. So he saw our new set and a lot of the sounds are sampled from our studio experiments – basically he was tripping out, saying stuff like “I have no idea what the drum machine is that you’re using.” And he’s a crazy synth-head, so it’s cool when you get that kind of response. It’s trickery for people who know.

Is being on the edge of control something you look for in your music?

My favourite eras of music are when people are trying to figure something out but haven’t quite mastered it yet. Take really early house music or techno, where it hasn’t really formed into a scene yet and people are still pushing the buttons and trying to figure out what does what. It’s like the real early dub stuff too. A stoned engineer is just like “Woah, this is killer, this is trippy,” but it hasn’t really evolved to the point that it’s at now.

So in a sense you’re trying to manufacture that initial creative uncertainty in your production process. Yet you’ve recently switched to a Live-oriented set-up for your performances.

I knew that we were going to start touring again and we wrote the latest record with more MIDI with the intention of switching over to a smaller set-up for clocking and sequencing things. Our set up before was pretty cumbersome to travel with since we usually also travel with our two kids. There’s their stuff to carry too, and on top of our gear it’s just an insane amount of stuff. So it was kind of like, “Alright, let’s start using the computer and just figure out how to do it.” And I’d never used a computer to make music until like last spring. 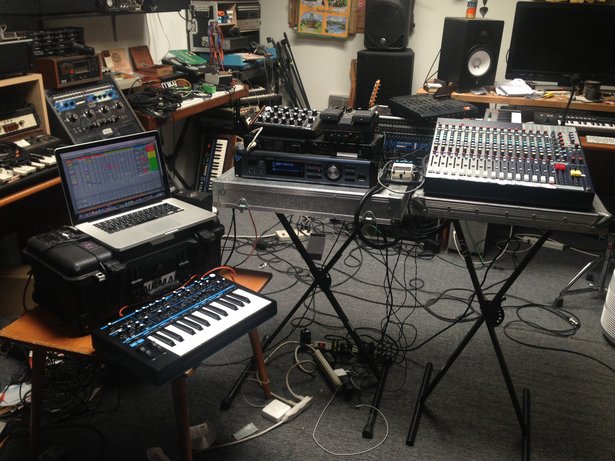 How did you find the learning curve for Live then?

Oh my god, it was so quick it was crazy. I learned it in two weeks. I had everything set up and could play perfectly. I generally use ProTools for recording so I have that reference point, but for Live it’s just crazy how well it works. I probably use it in a different way to most because I have the computer off to the side. I’m more focused on a 16-channel mixing board that I’m doing the live mix and dub with, so I rarely look at the computer until we switch up songs or do the transitions. The computer is just an external element. Basically we use it in the same way as the analog gear, same as the tapes or the other sequencing stuff we used to have. I use two small MOTU units, the small MIDI box and one of the 8-out channel things.

So you’re routing the audio from the mixer back into Live for dubbing?

Everything’s laid out on the board. So it’s basically like doing a dub set, you know? Or being at the controls, performing a live mixdown. So it ends up sounding like we’re remixing our whole record. At first we did it straight forward and then now as I’ve learned Live more, I’ve learned how to set up the files so I can do smooth changes between tracks.

At this point I can’t see us going back to our old style of live performance. The computer powered set sounds just as good. If anything it might be little bit more tight and way more reliable. I mean, it’s funny because one of the issues that we using tape was if it was real hot or humid, the tape would stick and we’d just have to stop the show. You’d have to wipe the side of your nose and grease the tapeheads with oil so it doesn’t stick when it’s humid. So we don’t have that problem anymore.

Keep up with Peaking Lights on their website or hear more on Soundcloud.