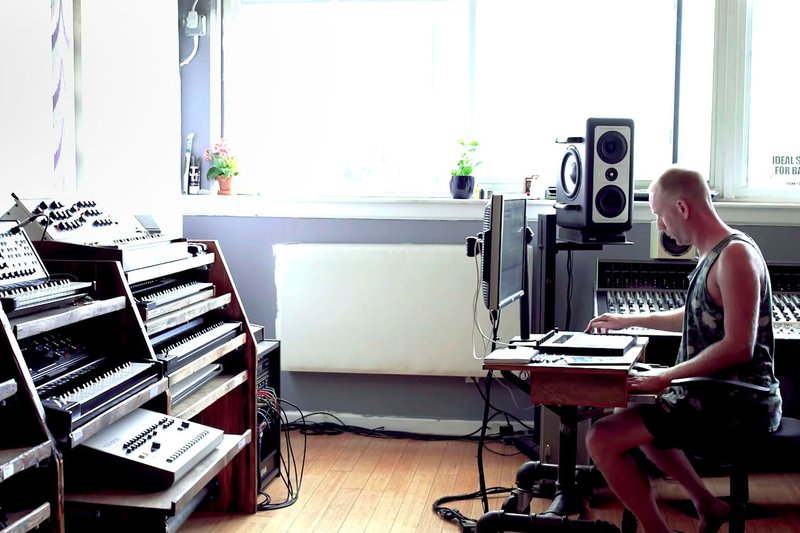 "I love teams,” says Nick Hook, "I love uniting human beings that maybe in social settings or any situation couldn't be united.” Nick’s walking the talk here - his latest album is called Relationships, features 21 collaborators and chronicles a transformative calendar year. Looking around at Nick’s Brooklyn studio, you’ll find walls signed up and down by collaborators in permanent marker (the entrance to this studio is featured on the album cover for Relationships), and an open, welcoming vibe; chill on the couches, tinker with some of Nick’s synths on one wall, lay a verse in the vocal booth, or just hang around.

The fruit of much effort, Nick’s studio has become a collaborative space for a wide gamut of people – well-known rappers, young up-and-comers, veteran studio pros. It’s a testament to Nick’s compulsions for creativity and collaboration. Even talking to him for the interview felt like a positive collaborative creative exchange. Nick was also generous enough to share a Live Set of one of the tracks from his album.

While Nick might be a new name for some people, his influence isn’t; having worked with Run the Jewels, Azealia Banks, Action Bronson, and the Depeche Mode producer Gareth Jones, to name just a few, he’s built up a reputation as something of a “producer’s producer”. David Abravanel spoke to Nick about mentorship, finding the right moment, reorienting oneself for creativity, and what’s next in multiple directions.

Nick Hook takes you on a tour of his studio

Your studio has become a focal point for a whole community of musicians. How did you first set it up?

I got this place in 2010; I used to record under my loft bed in the East Village. I had a bunch of these synthesizers stacked everywhere. So we had it built in out, L-vis 1990 was involved – I co-produced his first album on Island and that was the first time that I'd made someone else's record, so I was recording my own stuff in here but then we made his record. He hired me because he knew I knew how to work the gear. So all of a sudden I was a commodity who knew how to run his studio and work the gear. I've always known everyone from all the circles so I think... we did Kilo Kish's first solo project in here, cos I was trying to take on just any projects just to complete records and teach each other how to finish and just get in the fire, ya know? So that's when Kish brought over A$AP Ferg and Flatbush Zombies, Donald Glover [Childish Gambino] came here, so what I've learned is that every year in my career – well [Azealia Banks’] “212" happened here, that was first – but every year there's just these weird hard left turns where you just meet someone at a party or now that people know the spot’s here, you'll get a call from the manager that's like: yo, we got some new kids coming through and they'll just step through and it's just turned into that.

I've had a couple of engineers here. Action Bronson's done a lot of his last stuff here. We did the The Rap Monument here. We've done a lot. So it's just turned into this wild place, it just happened.

What happens when you’re in a studio situation and either you or your collaborator just isn’t feeling it? Do you have any strategies to which you turn?

Well I think as I've gotten older, it's like if you don't get something done that day it just wasn't meant to get done. It's like, okay, cool, we were just all frazzled. Because my style's weird, I run around a room and fuck with shit and some people are only mouse ‘n click guys. And I freak them out sometimes because I come from being in a band, and when you have your hands on the instruments you change notes like 11 times in four seconds.

"Try this C, oh no, move it over, move it over…” and I realized the younger guys clam up because they've never spoken to anyone about music – because it's an internal dialogue from your brain to the mouse. They've never actually spoken out loud about music. And so that's one thing I find really fascinating about where it's gone for me.

Speaking of working with younger musicians, mentorship seems to be big for you. Were you mentored when you were coming up?

Yeah, I've had a mentor since I was 14. My best friend was 30 when I was 14 and he produced my first band and recorded us on a four-track. Then he let my band open for them when we were 15 in front of 800 people. Then Gareth Jones from Depeche Mode became my mentor and then my man Mickey Petralia who programmed a lot of stuff on [Beck album] Midnite Vultures and worked with Mario Caldato Jr., he's been one of my other mentors. And I guess my man John Kuker who gave me my studio. He was like the philanthropist for my life. He saw the manifestation of me and gave me the oyster, like, go manifest this motherfucker. So I've realized that I think my karmic power is that I need to pass that down. I have to! If I wasn't giving my knowledge to everyone and I've been gifted it my whole life, why would I even be here? That would be wack. And I have future plans to try to let every kid know they can do this. But yeah, I've always had kids, interns, assistants and tried to show them everything.

It’s tough to peg you down in any particular genre – and Relationships contributes to that eclecticism. There aren’t that many albums that feature both Chino from the Deftones and Novelist. How do you define what you do?

I firmly believe that if you sit with me on this album from minute one until minute 53 or whatever with your phone off, and you love music, I think you would love it. Regardless of if you like country, if you like trap, if you like the Deftones, I've played this record for so many people and that to me's what music truly is, like that's what [Dr. Dre’s] The Chronic did for me, like, there wasn't a blend, you took a Slayer riff and put it over some shit, like there is no genre. Like that's what we're trying to have our race be: no genre, because you can't fuck with each other. Y'know? Music was the first form of it that we got right.

Nick Hook explains the motivation behind his “Relationships” album

How do you go about finding collaborators?

It's different every time! When me and Kilo Kish just kept bumping into each other, I didn't even know she made music and one day I turn around in Guitar Center and I'm like "you again!" and then I remembered her name and looked her up on Twitter and she had 20,000 followers and everyone's like yo you guys should work with each other, and I was like "fuck yeah".

Me and Junglepussy saw each other last year at PS1; we'd never even talked about working together. I'd seen her record here a few times, because sometimes people are here and I'm not here. I'd seen her two separate times but I saw her rap progress so much I was blown away. From afar. And then I was like, yo I can't believe how much you've grown, like can we fuck around one day?

On my Ninja Tune EP I wanted to get outside of my comfort zone. I knew I could get a hold of [Parliament-Funkadelic keyboard player] Bernie Worrell and pay him some cash, and I thought what's better in life? That's my hero man, like him and me on the same song, like, and so he came over and it was like sick man, that was worth everything. So everyone asks what do you do, and it's just really truly build relationships. If your word is good on the street - because a lot of people are trying to take advantage of people in this business, like especially a dude's getting older, y'know? I think your word is really important. And I've been fortunate to work real strong to be a good person in the business.

Your edition of FACT’s “Against the Clock” series was really successful. How much does that represent your usual workflow here?

I know if I just showed up to that doorstep one day we could just get this shit hoppin. And so my “Against the Clock” was more... I run in here and some days I'll bang on the 808, yeah that's what I do, I take my time and feel good about it. But I just want you to know that this shit's live and direct in here. I felt most proud at the end when I slowed it down - I don't know if anyone realizes I was controlling an entire room of analog off the Push. When I slowed the tempo down that was like 20 things slowing down with a digital instrument from the computer.

I just wanted people to know that this shit works, this isn't a museum, this is a live wire right here. And so if you wanna hear my finished music, I make albums, they're for you to listen to, like I polish the sculpture when I mix. There's a precision in mixing, there's a patience level to mixing. And so that's why I wore my shorts, cos I wanted them to be pissed off at me, they could make fun of me, but when I'm in here with [Action] Bronson I wear my shorts we feel comfortable in here.

You’ve mentioned that your life routine changed while making Relationships - what’s a typical creative day like for you?

I started waking up real early, and started creating at 7 a.m, like real full-on sessions, not just like I'm poking around. I'm in. What I started doing before that was the last move of the night I clean the whole studio. Fill up the water pitcher, when I wake up I have the teapot ready, there's nothing to do except get started. And I realized there sun's shining down, you’ve got that pure energy, you're just up, and all of a sudden it was turning 11 a.m and I hadn't even looked at my phone and I was like, oh I just learned how to do it. Now I know how to do it.

Keep up with Nick Hook on Twitter and Soundcloud.