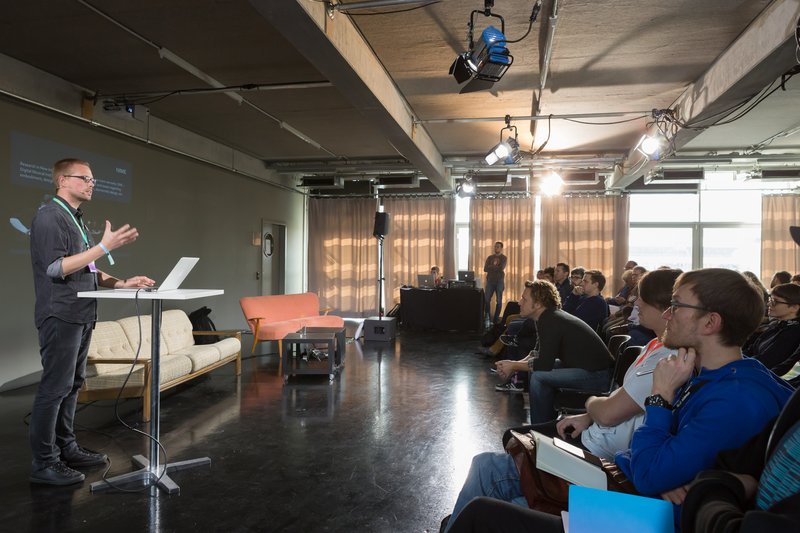 In October 2015, the Loop summit for music makers brought together a spectrum of creatives from across the music technology landscape; artists, developers, designers, researchers, academics and passionate amateurs met to share their work and discuss the desirable states of future technologies. Mark Smith joined the discussions to capture the thinking of those wielding the knife at the cutting edge of technology.

Looking at some of the defining moments of music technology in the 20th century, a clear trend emerges: living dangerously with technology can make your music culturally relevant in unexpected, exciting ways. Overdrive and distortion resulted from guitarists overloading and even destroying amps in the late forties and early fifties; modular synthesis emerged from using technical measurement and communications devices purely for sonic means; tape echo was a product of rerouting reels around extra heads; analog warmth or “non-linearity” results from flaws in frequency response and channel crosstalk; phasing was born when Abbey Road engineers messed with tape machines while their lab coat controllers weren’t watching – and the list goes on. The point being, that while music and art will always be considered primarily fields of creative expression, the driving action of their evolution often takes place at the meeting point between technology and design.

If some of music production’s evolutionary leaps were characterized by a willingness to push technology beyond accepted best practice, in 2016 technology’s connection to music is characterised by efficiency, complexity and intimacy. Anyone with access to a laptop and a web connection can zoom in to the micro scale of sound and manipulate an endless array of parameters without getting out of bed. What’s more, this has been the norm for at least a decade – we’ve been granulating and warping from the comfort of our own homes for so long that it seems like the bright new future of music production is steadily receding into the recent past. We enjoy easy access to high quality products, faster, more flexible programs and smaller, more colourful interfaces, but the promise of always-inspired music-making with intelligent, liberating technology remains as elusive as ever. 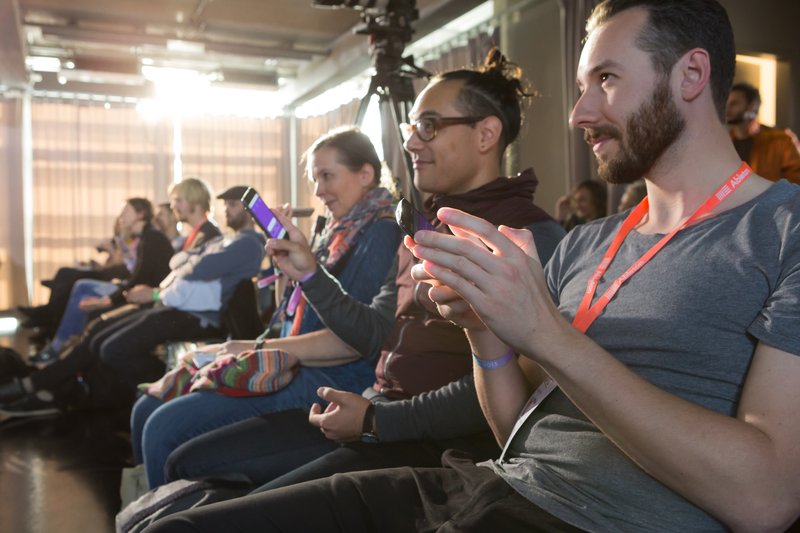 Attendees at Norbert Schnell’s Loop presentation “All Together Now”

This isn’t the fault of tech in and of itself. Beyond the marketing copy, technology still has the potential to show us a picture of music that’s genuinely inspiring. However, the cutting edge may simply exist beyond the domains the average home music producer normally encounters: the fields of education, instrument design and live coding offer creatives fertile environments to explore beyond the promise of harder, faster, stronger that shapes our typical relationship to music technology.

Education, instrument design and live coding are seemingly disparate concerns, but at our inaugural Loop conference, we saw overlaps where live coders are teaching school children to make music and instrument designers work with universities and civil institutions to create unprecedented performances. Rather than streamline pre-existing methods of creation, forward-thinking music technologists offer ways to step outside of comfort zones and standardized conceptions of music itself. What’s more, as time passes their creations are becoming easier to access and understand – and a lot of them are even available for free.

One of the most surprisingly accessible and exciting fronts of emerging music technologies is live coding. You could be forgiven for associating coding with complex, arcane languages and inaccessible musical landscapes but the truth is commonly quite the opposite: programming language is arguably simpler and more intuitive than musical notation or even your average DAW interface, and coding's deregulated composition environments encourage you to think about and make music in ways you may not have considered.

Thor Magnusson made this abundantly clear at Loop during a talk about his research into instrument design and particularly his line of “ixi” software. A lecturer at Sussex University and a longtime advocate of live coding, Magnusson was able to show how the niche field blurs the lines between composition and real time performance, while merging the avant garde with DIY culture. Where DAWs and their linear left-to-right timeline excel as an interface for traditional song structuring, live coding software such as ixi lang allows you to reconsider how your music should develop.

Who decided that music should run left to right anyway? These are the sorts of questions posed by academic musicians insulated from culture, and though they might sound profoundly complicated, Magnusson’s answers are simple when displayed with code. By entering the name of a sound, drawing your own bars and typing notes with numbers, you can make simple beats and melodies almost immediately. If you memorise a few different command lines a broad range of modulations and structural changes becomes possible. Whatever simple information you entered beforehand becomes hugely pliable – and you can do all this to your own uploaded bank of samples. Given that just about anyone can get up and running with a few minutes, those who are willing to put their time into live coding software like ixi lang can reach highly intuitive and fluid levels of improvised composition.

When we replace traditional notation, the piano roll and blocks of MIDI with simple words and numbers, we open the playing field to those who haven’t learnt the Western system of music that we’re so used to. Children, the elderly, the mentally disabled and just about anyone who chooses to try live coding can begin to feel what music can be for themselves and on their own terms.

In fact, another coding program called Sonic Pi bills itself as “Live Coding for Everyone,” and can be used to create everything from “canons to dubstep.” Like ixi lang, it’s free to download and exquisitely simple. Sonic Pi was created by Sam Aaron and is intended for use in classrooms. You could safely describe Aaron as passionate about his utilitarian vision for coding; the sense of relaxed urgency he displayed while speaking at Loop gives you some sense of the potential for programs like Sonic Pi and ixi lang to democratise music making for those who never acquired the considerable technical knowledge and musical language required to use conventional DAWs.

Seasoned home producers may applaud the sentiment but a fully kitted-out prosumer could legitimately feel the opportunities offered by coding are somewhat redundant. However, coding offers something that a new compressor or plug-in never will: a chance to recalibrate your connection to music. It’s also the difference between being a user and a creator. Mediums like code allow you to build instruments, self-generating structures or entire musical ecosystems from scratch, which should be an appealing prospect to those looking to push technology beyond best practice. The paradigm shift here is that music itself is the technology in question, rather than a physical device like a tape machine or amplifier.

This lack of physicality is still something of an issue at the leading edge of instrument design. If you don’t have tactile access to the machinery, the question of how to abuse it becomes abstract. However, other avenues for innovation emerge; as sensors become ubiquitous in everything from gaming consoles to smartphones, instrument designers acquire a new set of creative tools that can help composers expand their language into other mediums, such as choreography and industrial design. In a panel on the future of instrument design at Loop, academics, musicians and app developers were excited about the prospect of building new instruments outside the demands of market commercialism. Interdisciplinary creatives like Leafcutter John showed how sensor technology allows us to build instruments around our bodies themselves rather than via more artificial interfaces like keyboards, potentiometers and faders. Joseph Malloch made the connection even more explicit through his sensor instruments designed for dancers, which effectively turn physical choreography into a musical parameter and blur the boundaries between creative disciplines.

It’s not just digital components that are pushing the forefront of instrument design, but rather a combination of digital and analog technologies with modern and ancient designs. This duality is evinced by the work of Amelie Hinrichsen as part of the 3DMIN team; their award-winning PushPull instrument resembles a hand accordion with a cardboard bellows regulating the flow of air over a microphone, while sensors in the hand piece open up the breathing acoustic sound to reams of digital manipulation. Rebecca Fiebrink’s research into machine learning goes another step by allowing you to effectively construct your own instrument before “teaching” a controller, be it from a console or a smartphone, to figure out the relationship between your gestures and the parameters you’ve chosen to manipulate. Her Wekinator instrument can learn as many applications as you can teach it, meaning you can use it to create your own customised instruments for your specific personal wishes and needs.

As the technology continues to improve and becomes more accessible, the possibilities for expressive control increase exponentially: imagine if you could perform envelopes with all the precision of your own muscles, limbs and digits?

Paradigm shifts like this demand forward-thinking composers to step into unknown realms of music making. The Parisian IRCAM institute is breaking new ground by developing a web-based mobile project called CoSiMa that allows audiences to interact with a live performance, in a sense giving them the ability to collectively compose in real time with the artist. The project was presented at Loop by IRCAM’s Norbert Schnell – see the full video here.

This is something of a game changer when we consider how rarely the audience enters the mind of a composer. With this app they have to consider what sort of music would arise from interrelationships between people beyond the composer’s explicit control. In effect, the audience becomes a vital part of the score.

While you might not be rushing out to include the avant-garde of music technology in your home set-up, it’s worth considering how your relationship to technology can help your work become more about your personal wishes than what the abilities of your tools and instruments provide. Even if you don’t dive into live coding or instrument design, thinking about what these technologies can offer engenders a perspective that looks beyond the traditions we inherit from history and culture. It always pays to keep an eye on how to overturn and challenge the parameters that your technologies provide, because those who don’t play by the rules are often the ones who leave their mark.