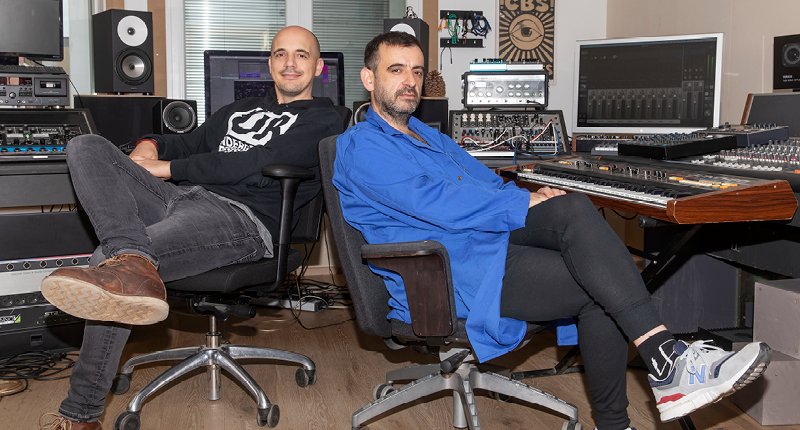 “Buying things? Yes. Getting rid of things? Complicated.” This is how Modeselektor’s Gernot Bronsert sums up the duo’s gear habit. A look around their studio in Berlin’s Mitte district demonstrates the point. Low shelves along three walls house all manner of hardware, from iconic vintage boxes to weird and wonderful oddments and cutting edge FX units. (As I later discovered, the collection spills out into the hallway, too).

This gear has helped shape the distinctive music they’ve made as a duo and as two thirds of Moderat. Some of it has been in Modeselektor’s possession for almost three decades. Still, they’re not the types to get bogged down in the search for authenticity and “classic” sounds. Instead, working with interesting tools is simply a route to creative inspiration. As Bronsert puts it: “[If] you have new gear you are motivated - and at some point you have a new track.”

When sparking new ideas is the goal, quirks, kinks and faults can be more valuable than hi-def sound or vintage cred - and the duo have their fair share of weird and wonky gear. But speed is also important - particularly if you’re Bronsert, a self-proclaimed “classic artist” type who would rather make a track than get bogged down reading the manual. (The quieter Sebastian Szary is willing to get a little more nerdy).

“I just want to jam,” Bronsert says, as he and Szary snack on nuts and drink their morning coffee. “I just want that [it] works and it sounds good. Otherwise I get demotivated so quickly.”

As such, the idea of making a sample pack had been kicking around for a while. “We always wanted to sample the 808, the 909, to make our own sample kits,” explains Bronsert. “When we DJ, for example, Szary is too lazy to buy new music.” Szary gives him an unreadable look. “So he brings gear and performs live to the music I DJ. But the 909, he’s had since he's 20 years old.”

“It's an old lady,” Bronsert continues. “You don't want to take it with you. And if you get [another] one it doesn't sound like your 909, because every 909 sounds different.”

So the idea was to sample their gear and bottle its unique flavour for quick and easy use. “This is how it started,” Bronsert says.

The plan to make a sample pack became more concrete in March 2020. March 12th, to be precise – the day of a scheduled Modeselektor party at Berlin’s Ohm club. “The party never happened,” Szary deadpans. As lockdowns kicked in across Europe, the duo watched their touring schedule disappear, and with it the livelihoods of their crew.

“We are a touring band with a touring crew,” says Bronsert. “Most of the crew members had a big problem after all the shows got canceled. So we had to find a way to help them.”

They hired their front of house sound engineer, Felix Zoepf, to work with them in the studio – and realised that, with an extra pair of hands around, they could make the sample pack a reality. “He's the architect of the whole thing. It's basically his membership card for Modeselektor,” Bronsert laughs.

At this point Zoepf bustles in with a brisk, “Moin, moin!” His relationship with the duo goes back over a decade: he first did sound for them at Glade festival in 2009. His skills extend far beyond working the sound desk – he is the in-house sound engineer for Monkeytown, the duo’s label, and helped with the construction of their studio in 2014.

“He's a punk,” says Bronsert. “He's very chaotic, but he's on the other side very focused and organized. So he knows, for example, what I was never able to learn in my whole career as an electronic musician: How does a patch bay really work?” Zoepf starts laughing around a mouthful of nuts. “He's really geeky about new software, new hardware.”

This made him well qualified to begin sifting through the duo’s collection in search of samplable gold. “I spent many weekends here,” Zoepf says. “In the beginning we had thousands of ideas, and then of course we had to boil it down and boil it down.”

A key part of the process was finding the right signal chain to give the sounds flavour and personality. Bronsert points to a vintage Studer mixing console - the smaller of two in the room. “We bought this desk just to send the machines through. It has its own natural distortion when you go [into the] red or put the gain up. No guitar effect or external distortion makes these warm, Antony “Shake” Shakir sounds that everybody wants.”

Zoepf would usually throw another FX box or two into the chain – particularly the Analog Heat from Elektron, “which is just always good! You can put it on everything. It's kind of like the [hardware] version of the Drum Buss from Ableton.”

This, of course, is just a fraction of the many tools which have fed into Modeselektor’s sound over the years. Building a collection over decades means that there’s history to the machines and how they’ve been used. 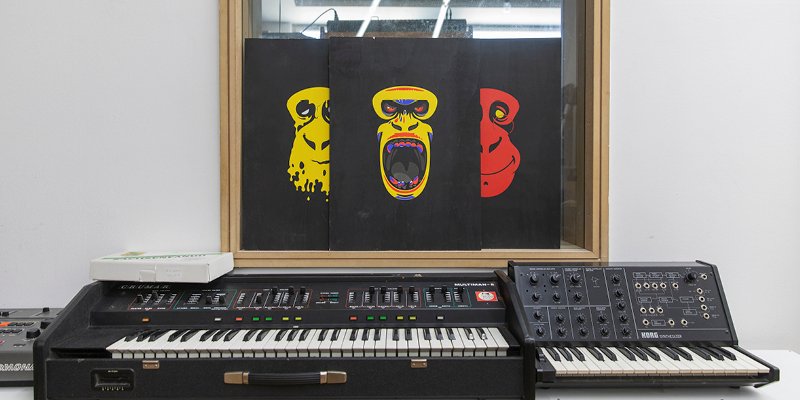 Crumar Multiman and Korg MS-10 at the Modeselektor studio

“Every machine has a story,” Szary begins. “The [Roland TR-]909 I bought in 1993 – for Deutschmark, not Euro! That was the time when prices were rising, the analogue movement was coming back.”

That’s not the duo’s oldest bit of gear, though.

He means the Crumar Multiman-S, a hefty string synth which lurks against a wall in the next room. We troop out to look at it.

“It's really heavy,” Zoepf says. We take it in turns trying to lift it while a certain long-haired techno producer wanders into the next door studio. “But it's fun to play. You can play all of the keys at the same time – it’s fully voiced. It sounds so nice. It's like the perfect nineties IDM-scape machine.” 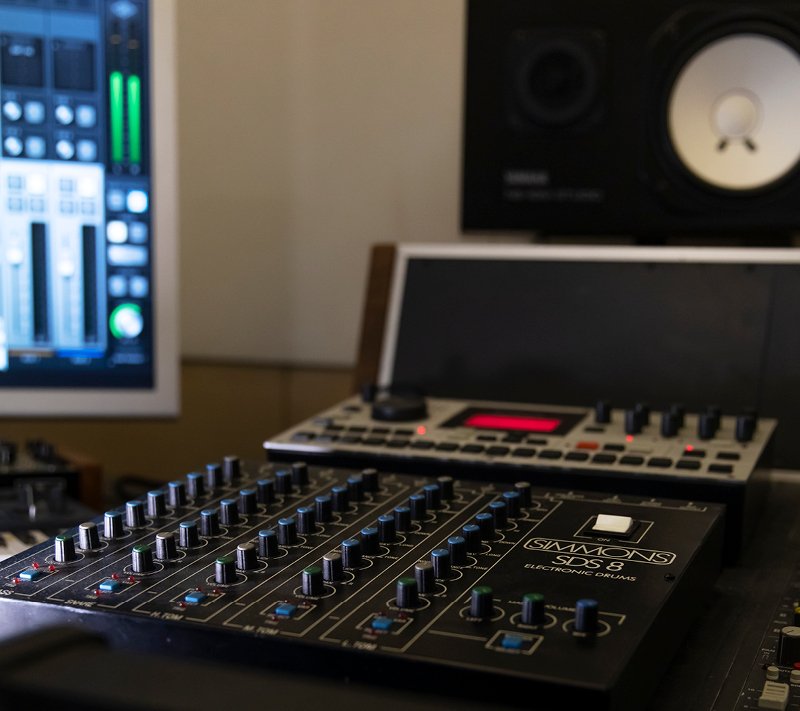 Back in the studio, I ask what it is that draws the duo to particular gear. “I like vintage gear,” Bronsert explains. “So this Simmons for example” – he heaves a squat black cuboid, the Simmons SDS 8 Drum Synthesizer, off the desk. “For me it’s so eighties that it’s cool again.” “The drumkit is so brutal,” Zoepf enthuses. (You can hear just how brutal in the outro of 2013 Moderat cut “Versions”).

“Or the Rhythm Arranger” – Bronsert points to a cute wood-finish Roland TR-66 perched on a shelf. “This is the one before the CR-78. So this is three editions before the 808.” There’s a back-and-forth while the three try to establish the precise chronology of pre-808 drum machines made by Roland and its predecessor Ace Tone.

“For organ accompaniment,” Bronsert puts in.

So how would that make its way into a Modeselektor track?

“Sampling,” Bronsert says. “You see that little compressor?” He points to another quirky box on the shelf, the DBX 119 “Compander”. “When you press [the Rhythm Arranger] through it, it sounds…”

“No, it's totally not!” Bronsert protests. “It's super sexy I think. And then I just sample it and use the sounds. Squeeze them and put them in a sampler again, do resampling. 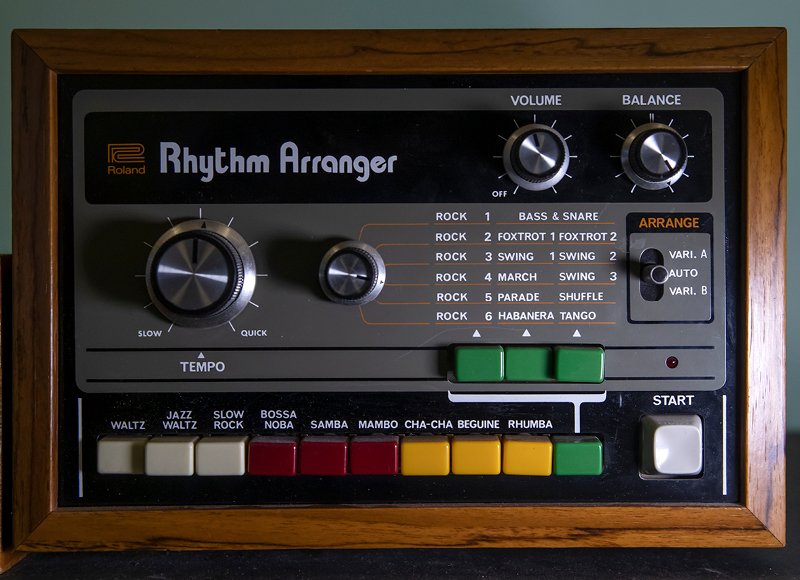 “Then there's also the Vermona drum machine, which is the only drum machine which was built in the GDR.”

“I can bring it,” Szary says, disappearing next door and returning with a chunky grey spaceship which he drops in my lap. It’s an original Vermona DRM.

“It was the only machine with MIDI in the GDR!” says Bronsert.

Szary: “I know stories – some famous rock bands from the GDR, they played shows in West Germany and took refrigerators and other things into the west to swap them for a [Yamaha] DX7. I think this one [Vermona drum machine] was also made for export. You see, everything is in English. I have no idea how many were built. 100 or 200?”

Szary had the good fortune of finding one on eBay.

“But it's also a pain in the ass to program this thing, honestly,” says Zoepf. “You can program the samples very comfortably in your Ableton.”

Having done the bulk of the sampling work, Zoepf is well acquainted with the foibles of each machine. The Arp Odyssey, for instance, “was a pain in the ass because it's so unstable tuning-wise. I always had to be here at the fine tune [knob] watching the tuning. Also the [Korg] MS-10 was slightly out of tune.”

“The MS-10 needs 15 minutes to warm up,” Bronsert explains. “When you switch it on and start playing, even if you tune it, it changes within the next minutes.

Then there’s the duo’s TR-606, modded – with mixed results – by a friend. Additional control over tuning and decay time comes at the cost of a noisy output. “The machine makes clicking noises every time an LED is hit by the running light,” says Zoepf. He had to make several attempts at sampling it, eventually finding a spot in the studio where the interference miraculously stopped.

Frustrating as they are, it’s these features which make the gear what it is. “All the sample instruments [in the pack], they all have these little inconsistencies which give them character,” says Zoepf.

Bronsert compares it to a producer’s hunt for “happy accidents”.

“That's what everyone's looking for. And I think this is what Felix just mentioned, that the soul of the pack is all the mistakes - they’re happy accidents in the end.”

The three delved beyond vintage gear too, working with a small modular setup - including Mutable Instruments’ Plaits, Clouds and Rings modules - and cutting up some field recordings provided by Szary. “There's a kit that's called Brueckenstrasse. It's basically Szary coming to the studio, taking a piss, making a coffee,” he laughs. “I just cut it up - and it's a pretty wicked kit. A day in the life of Szary.” Using samples not as one-shots but as source material for wavetable synthesis opened up yet another zone of exploration. “It's totally open what you can do with it,” says Szary. “That's the magic of sampling.”

The only question, then, is where do you stop? “Really, it stops because you get tired,” Zoepf jokes.

Now that the duo’s studio has been captured in easy-to-use form, it could well change the way they work – particularly on-stage. “We always worked song by song,” Bronsert says of their live sets. “We'd sample our own songs and perform them back. But when you create a song with the sample pack, then that changes the whole game.” Instead of reverse-engineering each track, they can work straight from the sample instruments used in the production process.

But in the end, it’s about more than convenience. Taking inspiration from producer-technicians like Errorsmith, whose Razor soft synth was a highly creative extension of his musical output, the three see the sample pack as a kind of “meta music” - and a way, as Bronsert puts it, “to round up an era of Modeselektor”. Their only concern is that the sounds might be a little too good to share. “You sit on your sound at some point, like Gollum protecting the ring. But I think this is not very 2021.”

Text and interview by Angus Finlayson.

Spirit of the Beehive: Indescribable Intensity