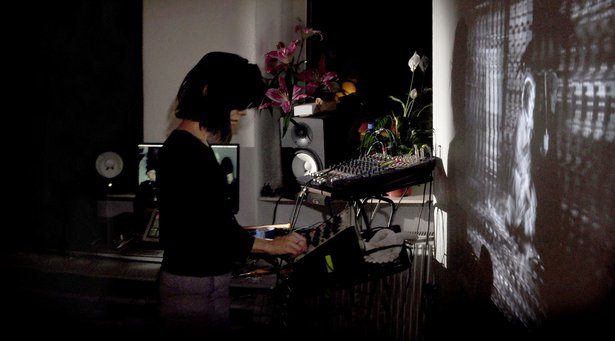 According to conventional wisdom the ideal working environment for a musician is free of external stimulus. Indeed, some of us go to great lengths to isolate ourselves from any kind of sensory distraction – be it visible, audible or otherwise. The assumption being, the less there is coming in from the ‘outside’, the more we can bring out from the ‘inside’.

But what happens when a musician turns this scenario on its head, introducing a constant stream of audio-visual stimulus into her workspace? This is precisely what producer and songwriter Lucrecia Dalt has done while writing and recording the music for two upcoming releases. Having recently settled in Berlin, her curiosity about her new home and her interest in cinema converged in an unorthodox, yet highly productive compositional technique. Dalt turned her studio into a screening room and, instead of absorbing classic works of New German Cinema in her leisure time or as a break between recording sessions, she let the films’ imagery, sounds and atmospheres envelop her and find its way into her music.

Dalt explains how this technique came about:

It all changed with my record Syzygy. For me, a stimulating working environment needed to be overly saturated. Juxtaposed information coming from lines of opened books, movies playing on another screen, a window opened to let the loud street background be present inside the room, music from others, flatmate making music, flatmate having sex, flatmate asleep, oscillating noise in my head – I needed to overlay my music with these elements to be able to move forward. These random clusters of information brought about interesting accidents that became a sort of new working techniques. But the accidents that stood were the ones happening when I was interacting with films: while recording I used to play them back on mute and sometimes, just randomly, I would turn up the volume for a second while playing back the stems I was working on. These random and brief sounds worked as deflectors – little seeds containing other possible prospective melodies. This began in my last six months living in Barcelona. Then when I got to Berlin I applied for and received a scholarship through the Musicboard to develop this "technique" and explore the more extensive entanglements between the emotional dynamic experienced during the viewing of films and during the music production process, just to see what could happen. I chose German cinema simply out of my new context. With this method I worked on my two upcoming releases: a self-titled EP that's coming out in October with Other People and one LP that's coming out with the label Care of. 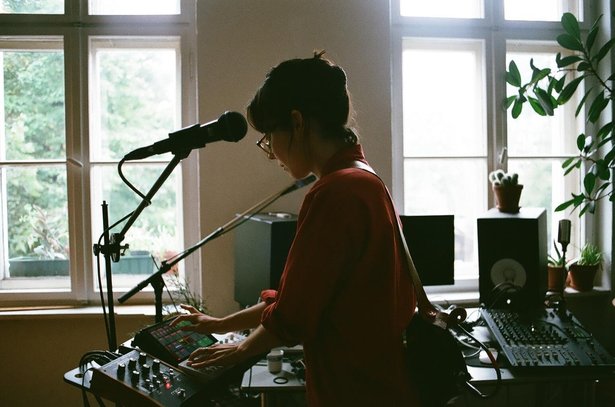 Lucrecia Dalt in her Berlin studio. Photo by Charlotte Collin.

Can you give a concrete example of how watching one of the films became part of a song?

The opening track on the LP with Care Of called "Paralela" would be one example. I played the film "Der Rosenkönig" by Werner Schroeter. I let the sound of the movie on for a while, then turned it off and continued playing it back on the screen on mute. Then I listened to something else to reset my sound memory and I started working on something from scratch. I processed some orchestral sound from the OP-1 through the Moog Murf pedal and made a progression that was fed by the theatrical and flamboyant images of the movie still playing. Hours passed. I juxtaposed this recording with the sound from the beginning of the movie. And there, that sound that was entering from the film was just that necessary element that was going to determine the structure of what I had just recorded. It doesn't happen always, but it did this time.

Did all the films have something in common (apart from being German), and did you manipulate the film at all during the process, perhaps looping some sections?

No I didn't, but I wasn't always strictly playing films from the beginning. Sometimes, when the movies were heavily historical, for example, I felt that I had to stop working and just watch the films. Perhaps the only common feature is that I'd chosen films that could leave space for me to work but aesthetically they are all distinct – of course, there's some angst shared in most of the films for obvious reasons. Conflicts between the personal and the public, worlds existing on the edge of catastrophe, or rather other worlds needing to be build on that edge, the need to rely on metaphor or ritual to create a double world.

What about the actual sound from the films? Did you let any of the dialogue, soundtrack or music directly become part of your compositions? Or did the inspire you in any way indirectly?

Yes, I used samples, some in their original format, some processed with the Murf pedal (yes, again, and again). I had fun Murfing dialogues, making them become rhythms and textures. I also used sentences from the english subtitles as guidances to write most of the lyrics. 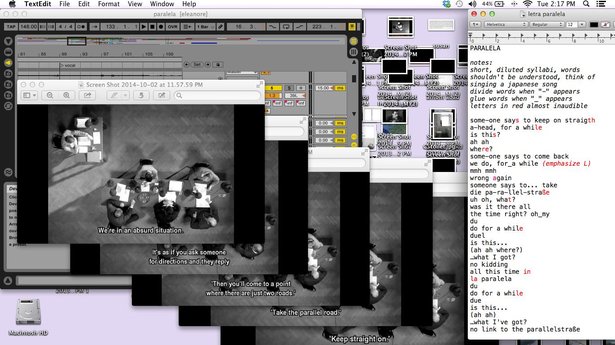 Work in progress on the track “Paralela”, incorporating subtitles from the film Paralelstrasse.

What would you say have you learned through this process?

It's tricky to convert an accident into a methodology.

And what have you learned about film and Germany?