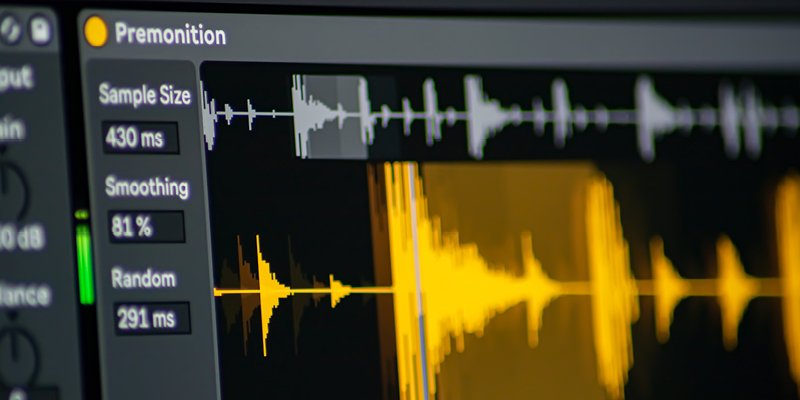 Whether you use its ready-made devices in your music, or build your own instruments and effects from scratch, new features in Max for Live mean new possibilities for Live users. With the release of Live 11, Max for Live has introduced a bunch of new improvements that make it a more effective tool for building devices, and let you stretch Live’s creative potential further than ever.

We thought we’d take you through some of these additions and have a look at a set of free devices, designed by the Max for Live team to give you a taste of what’s now possible and help guide your own explorations.

New and improved in Max for Live

Here’s a quick rundown of the new additions to Max for Live in Live 11:

MIDI Channel Routings: you can now route MIDI to and from Max for Live audio effects (just like with VST devices). Instruments can also accept MIDI from anywhere within Live. So now you could analyse incoming audio and send the data to your controller, use MIDI notes from any track in Live as a sidechain input for audio processing, and much more.

MPE support: Max for Live works seamlessly with Live 11’s MPE support, allowing devices to deal with note velocity and pitch as fluid data instead of fixed values. You can map this data to the parameters of a recipient instrument. This works with multiple notes simultaneously, and opens up all kinds of new concepts and possibilities for devices.

New API additions: Max for Live has access to Live 11's new note features like probability, velocity deviation and release velocity, which sets up all kinds of new ways to interact with MIDI notes in your devices. Devices can now access a clip or sample’s warp markers, and slices of a sample loaded in Simpler. Plus macro variations, Groove Pool and more of Live’s features can also now be accessed through Max for Live.

Performance improvements: the overall experience of working with Max for Live devices feels more fluid in Live 11, thanks to a complete overhaul of Max for Live’s user interface integration, which includes improvements to focus, positioning, scrolling behaviour, and performance.

Improvements for Device creators: a new live.scope object adds an oscilloscope, tuned to match Live's visual style by default and ready for your own customizing touches. Other new features enhance the overall experience of developing new devices: double-clicking an error in the Max Console jumps the cursor to the device causing the error, a new category in the Inspector Window lets you more clearly indicate which systems devices can be used on, and more.

More detail for device developers about the new features is available on the following pages on Cycling74.com:

The new API additions have granted Max for Live access to many new features and controls in Live, and the Max for Live team has built some devices that make use of them. These creative effects are designed to give an idea of what’s possible for device builders, and, of course, to be used in your own music.

Mattijs Kneppers from Cycling ‘74 talked us through the devices, and helped stir up ideas of how Live 11 and Max for Live can work together.

“I really wanted to do something with MPE! So, the idea with this device is that you can follow the pitch and amplitude of an audio clip and route them to an MPE-compatible instrument. You can have the instrument respond in real time, or record the slight or extreme pitch and amplitude deviations of any sound directly into your MIDI clip, edit the information as you like, and play it back with an MPE-compatible synth, such as Live’s Wavetable. It works best with monophonic audio material.”

“The new MPE capability of Live and Max for Live 11 means pitch is no longer stuck to a fixed note – it’s fluid. This gives you a lot of freedom, especially if you want to use melodies and slides in non-western tunings.” The flexibility offered by MPE goes further; you could even have multiple audio tracks analysed with different instances of the device, routed to a single Wavetable.

This is a straight-forward MIDI device for shuffling notes that gives interesting generative results. “It gives you different permutations of notes already in the clip – it will not add notes on times where there were none, or delete notes. And notes that were together at the same time will stay together at the same time. This results in a clip that is similar in timing and melodic and harmonic content, but that is different nonetheless. So it randomizes in a way that doesn’t screw everything up!”

There is also the option to listen through various iterations of your clip until you find something that sounds interesting. If you activate the Automate button, ranges with the size as defined with Loop Section will automatically be mutated.

With this MIDI device you can use notes in MIDI clips to change the playback position of clips in other tracks. Notes played in a track with the Clip Remixer device can make the clip playing in the target track jump to a corresponding beat position. “It’s a way of remixing or beat-juggling other clips by changing playback position,” explained Mattijs. “But it offers different ways to visualize and randomize things, especially when combined with Live’s new note randomization features.”

This effect takes a sound at an upcoming point (set with the Future Beats parameter), loops it with a type of grain engine, and plays it back with increasing volume until the actual playback cursor reaches that point in time. “This makes me think of time-travel movies – it’s the sort of effect you might hear when there are voices playing from the future!”

You might have seen that Live 11’s Clip View lets you apply randomness to note playback and velocity. “You can control this randomness by editing notes with the mouse in the Clip View, but this Randomness Tweaker device lets you play with the randomness properties of a clip’s notes with graphs and mappable controls.”

You can also use the Auto control to allow the device to change the note probabilities and velocities over the time set by the Duration, so you can change the variation of notes over time.

Instead of representing notes in a classic grid, this device uses lines that show the start and release velocity of a note. “It’s a different way to look at MIDI notes that leads to different ideas – by messing with the lines you can get all kinds of crazy combinations that you wouldn’t normally think of.” The tool makes use of Live 11’s new Release Velocity setting for notes; you can edit note pitch with the lines.

Here’s one idea for putting this into practice: using a sound in Sampler, head to the MIDI tab and map the release velocity (“Off Vel”) to a parameter such as Filter Cutoff, then try changing the vertical positions of the lines and listen to the effect as the note is released.

“These devices aren’t meant to introduce essential concepts you need in your workflow,” Mattijs mentioned. ”They’re just examples that we made to hint at what’s now possible; to show how you can create things that go beyond the standard idea of what a plugin can do. We hope people will go crazy, and make stuff like this but even better!”