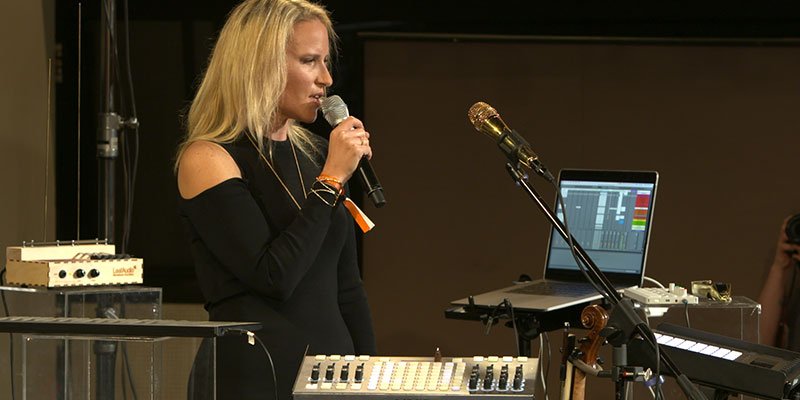 Musician, producer, live show programmer, entrepreneur, CEO and educator; these are just some of the hats worn by Los Angeles-based artist Laura Escudé. With such a wide range of occupations within her repertoire, some might ask, is it really possible to juggle so much? Escudé proves that you can.

Escudé's musical journey began with classical violin lessons at the age of 6. By the time she became the concertmaster of her high school, her reputation as a high achiever was already in place. Escudé went on to win the 1997 Governor’s Scholar Award to attend the prestigious Interlochen Center for the Arts Summer Music Program. Later she became the concertmaster of the Rhode Island Youth Philharmonic.

Up to this point, Laura's career trajectory looked like it was taking her into the world of classical music. However, a whole new perspective opened up for Laura when she attended her first rave. She found herself instantly drawn into the bottomless rabbit hole of electronic music and technology. She began to teach herself production and engineering, going on to perform with DJs at various clubs and festivals throughout her college years. As a student, Escudé also worked on shows at the live music venue on her campus. It was here that she began to form connections with artists and professionals within the diverse world of live show design.

As Escudé’s early career began to take form, she held a number of positions within the music technology and instrument sector. In 2007 Laura also worked at Ableton, becoming the company’s first Certified Trainer. She founded her first company EvoTech Audio in 2008 and later founded her current company Electronic Creatives in 2012, which became an Ableton Certified Training Center. In 2009 she was introduced to Kanye West’s engineer, Anthony Kilhoffer. After providing consulting to Kilhoffer on the Glow in the Dark tour she became the official music programmer, live vocal effect designer and playback engineer to Kanye West himself. Through this association and her work on other important projects came a strong demand for Laura’s expertise. Taking on a new generation of programmers and playback engineers, she expanded Electronic Creatives to offer live show design services to a growing network professional artists and clients.

The mentoring and teaching skills Escudé has been honing through Electronic Creatives are apparent in the video below. Filmed at the 2018 Loop summit in Los Angeles, Laura, in conversation with Ableton’s Dennis DeSantis, shares some of her hard-earned insights and reveals some of the crucial lessons – both technical and personal – she’s learned over the years of designing live shows. Watching and listening to Escudé, it’s clear that self-care, overcoming limiting self-beliefs are just as important to her as the musical and peripheral gear that she demonstrates in the walkthrough of her own live set-up.

So much for the theory – what does it look and sound like when all of this is put into practice? Check out the two performance clips below to see Laura Escudé demonstrate how all that preparation and practice can turn into an engaging, flowing performance.

In this video from our One Thing series, Laura demonstrates a creative technique of controlled randomness that she uses to generate new ideas: