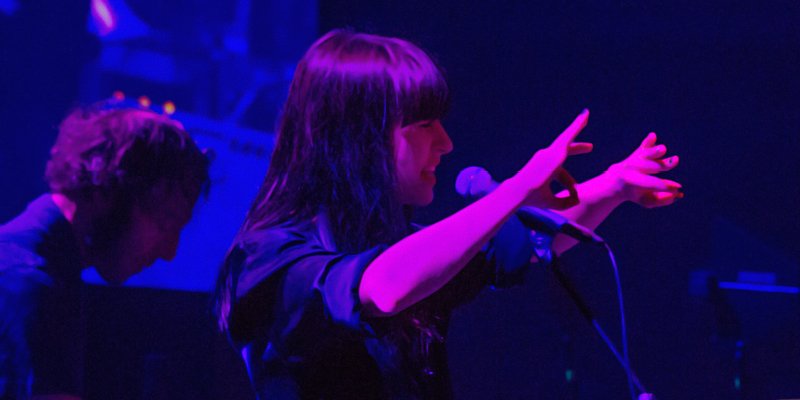 Back in 2016 at Loop, during a panel discussion on performance, Kimbra used the term "kink my think" to describe the process of putting a dent in the way you do things in order to grow as an artist, to push beyond normal patterns. Four years later, the worldwide kink that was 2020 found her expanding, contracting, and doing what she does best along the way… improvising. “I've had a chance to rethink all my business decisions this year. I'm not on Warner Brothers anymore, I'm working with an all female led creative team now, stylist and creative director, and I've never rolled like that. And that's bringing a whole new intuitive, poetic kind of language to the creative vision. That's a kinking, deciding to step out of where you've been comfortable in the past. It's certainly a kink to just pack up your life and move, and that's been a recurring theme for me. I've moved from New Zealand, to Australia to L.A. to New York and every record has been made in a different city. I'm a big believer in that being the key to remaining inspired. I revamped my studio, sold a lot of gear and made things a little more minimal, which has been really liberating actually.”

Kimbra performing “Version of Me” live in the studio

Back at Loop 2016, Kimbra put on a completely improvised performance with musicians she’d never worked with before including Daedalus, Lars Horntvethand Jeremy Toy. Everything was created on the spot, including words from a language she improvises in the moment as well. “What I'm really interested in about improvised music is watching people wrestle with self-doubt in the moment. I think jazz is like that, too, you watch someone going into a solo and they start off intimidated and then they overcome something in the moment of music.” As to the improvised performance in question she says, “There are lots of really questionable moments throughout that performance where you can feel the fear on stage. It's quite interesting to watch it back because I can feel my own doubt about whether it's any good. But then there were moments where things came together and I see us in a moment of connection.”

“It's energetic, it's the pregnant pause of bodies in a room, waiting, responding, moving to the "Oh shit. We dropped a groove! Oh, now it's stopped." You watch people, watching what they're doing, you know? So without that, I just can't, it's like sex without love or something, you know what I mean? It's like sex without any connection. I don't know if that's too crass to say. That's kind of been my experience of it. So I just can't wait to get back in the space of people again. And it doesn't mean it can't be really special for someone watching it at home. I just think, selfishly speaking, for the performer, I feel a little like there's an aspect missing of what it's all about for me.”

For now, she’s been doing jams and livestreams for her Patreon community, but it’s not resonating with that same energy. “I just think it would be easier for me if I even had one person to look at. Just even perform for one audience member looking up at the stage, and I could, like, give it to them. But the absence of eyes is tricky. It's the music. It's quantum physics. Matter and live music have the capacity to change under observation.” And as for the live streams she is doing? “I'm working on it. I still love performing. It's so great to perform. But I haven't found a way to walk away with that same feeling of like, 'We just shared something,' you know? I have to just have faith that we did.”

Kimbra performs a cover of the Amy Winehouse song “I Heard Love Is Blind” at the Mod Club in Toronto on February 2, 2018

Another huge part of Kimbra’s artist identity is one that lives and breathes on the stage, connecting with people through live music and improvisation. As musicians around the world find themselves with no live gigs to play and forced into digital spaces to reach their communities, she’s been adapting. “I haven't really gone longer than a month without playing shows since I was probably like 15 or something. Performance is where I come from. I'm not really a recording artist who learned to perform. I came from playing the dirty pubs and playing with loop pedals in the backs of cafés to three people, and then started making records. So, yeah, it's like a language being taken away from you.”

“It's really brought home for me the importance of eye contact on stage. I've found that connection on stage comes from very direct contact with my eyes, so I struggle. You know, I guess for the live streams, you just look at the phone or the camera. In New York I had a show with a six person camera crew and I just kind of had to look at the lenses and pretend people were there.”

We're speaking to Kimbra in her new digs in upstate New York, where she's relocated after six years in NYC. Like so many, the pandemic pushed her towards not only a change of scenery, but of pace as well. When asked if the change brought with it a sense of relief and respite, she replied, “Yeah, there actually was. That feeling of, ‘Oh, I have permission to stop? Oh, I can take up gardening?’ I think us artists, we have a strange guilt mentality. We get to do what we do, but sometimes I get this weird feeling like, I must make sure that I'm working really hard to justify why I get to live this life. It's an interesting rat race in New York City and I think it's been good to kind of just live... be in my body, be in my craft without having so much to prove because there's not the opportunity to prove it."

As we all continue to take it one moment at a time and navigate the new realities in both the world and in the music industry, Kimbra is sticking to what she knows. “Recently I’ve been working on the fourth album, which is my main focus, and it’s getting really close.” This forthcoming release is a “happy collaboration” between Kimbra and Ryan Lott of Son Lux. They’ve fostered a creative partnership and a way to work remotely that results in music covered in both of their fingerprints. “I think I've really found a partnership with Ryan. He's in Indianapolis and we work remotely. He sends me an idea. He sends me stems. I dive in. Then I change a bunch of things and turn off things. I add things. I send back stems. There's this really nice dynamic to it all. He'll say, ‘You added something that it needed’ or, ‘This is going in the right direction. But let me try it with some different sounds' or vice versa. I'll send a kind of shitty high hat idea and tell him, ‘I know you can do this better, but this is just the idea that I'm hearing’. It’s a kind of mind reading; I hear where you're going, let me take that on. I'm really excited about how well that's working because it doesn't always gel. Sometimes I work with producers and they're kind of infuriated by my presence. The way that I take things away and add stuff... it takes a certain type of person. I can be quite schizophrenic with my ideas. The producer-artist dynamic is actually about a lot more than just making music. It's about letting each other both be free and knowing when to focus without belittling someone else... it's a very sensitive dynamic.”

The spirit of balance and innate push and pull on musical relationships extends beyond the ones she has with her collaborators. “My relationship with technology is a dance. I can get super immersed into the technology, it's almost indulgent and ridiculous. But at a certain point you push the boundaries of those gadgets and reach a point where it's no longer as interesting. That's the way the human brain works. So then I play and dance to the other side and turn up at a show with only a processor, or with nothing, and play with the voice as an instrument.”

Kimbra demonstrates some of her live vocal processing techniques

Kimbra has a way with words when she talks about how she interacts with her tools and her audience and a way of understanding when to push and pull on them. “I call it a dance because it's very fluid for me, it's not static. I use technology to re-inspire me and I'll move back into that space, but then it does have its limitations. It does reach a point where it is more interesting to engage with the technology of just the human instrument, first and foremost. I've been playing with those two extremes. I really enjoy extremes in music. I enjoy that it can be totally digital sounding, like weird octavers all over the voice and everything, or extremely organic. And when you play with those two things as an artist, then you start to find which of those two ends of the spectrum are most interesting in a hybrid. I think I'm learning the art of intentionality, or strategic use of these things. You only get there by throwing yourself into the deep end with them and overusing them.”

“When I think of the time we're in now, we're all having to improvise. Improvisation is a kind of mindset, you know? It's such a powerful statement about how we navigate through hard times and a metaphor for evolution and resilience.”