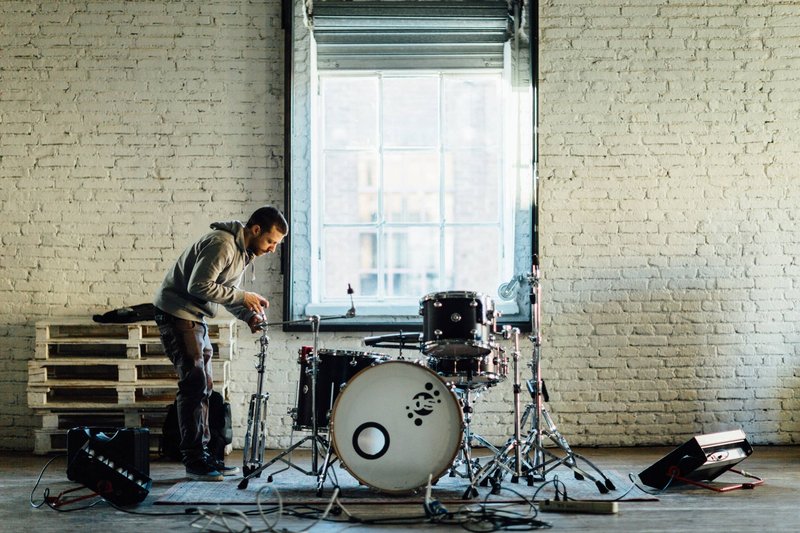 Did you hear the one about the drummer and the synth player who just couldn’t stay in time? Neither did Davide Compagnoni, aka KHOMPA, whose new album, The Shape of Drums to Come, consists almost exclusively of pieces built around melodic material triggered in time with the drums. As the sole musician, The Shape of Drums to Come sees Davide performing largely live takes on the drums while simultaneously playing Ableton Live, using a dedicated pedal controllers and a custom Max for Live sequencer device. David Abravanel caught up with Davide about the album, getting a natural feel from triggered parts, and the inspiring KHOMPA live setup.

What inspired you to make this album with drum triggered melodies, rather than working with other musicians or overdubs?

This was something that I had in mind basically since forever. I started playing drums at the age of 15 and I was interested in electronics from the very beginning. I've been studying piano and guitar before playing drums, so melodies were already a part of my musical vocabulary. And from the very beginning I've always been interested in going beyond the rhythm while playing drums, experimenting with different sounds, having fun with dynamics, using loopers, electronic pads, triggering samplers, etc. I've always wanted to have fun with my instrument rather than just stick to conventional drumming (but don't get me wrong, I have much respect for the art of drumming and I have studied drums for many years). Then I discovered a French drummer named Duracell who was experimenting with triggers and 8 bit melodies, and seeing a solo drummer doing melodies with his drum kit inspired me to push drum triggering to a new level.

I have been playing with other musicians for all my life and I will certainly continue to do so. I've been playing with my band STEARICA for almost 20 years now, touring Europe countless times (I am currently on a European tour, writing from a van somewhere between Belgium and France), and I've been in many other bands and worked as a session drummer in several musical contexts. But I've always dreamt about doing a solo record one day, and of course at the beginning I couldn't imagine that I would have done it with this incredible setup. Moreover, this setup allows me to do a live show totally on my own without the use of any backing track or loop. I am not a big fan of the pre-recorded tracks approach that many electronic bands/artists are adopting nowadays.

It wasn't easy. Doing a solo record means a big amount of work even if you do it in a conventional way, and in my case I also had to spend a lot of time in research, experimenting, finding a way to make this happen. At some point, it became a challenge with myself, and now I can proudly say that I won that challenge.

How does your custom Max for Live sequencer work?

I programmed the KHOMPA step sequencer with my friend GUP Alcaro, a skillful sound designer, and head of the Superbudda creative collective in Turin, Italy. GUP and I spent countless sleepless nights programming and testing the step sequencer. We started from an existing Max for Live object (a step sequencer) and further developed it as per my musical needs. This step sequencer allows me to control virtual instruments (synths and samplers in Ableton Live) through the MIDI notes generated by the triggers installed on my drum kit. Every time I hit a drum, the step sequencer shifts to the next step/note. In this way I can do melodies without the use of any backing track or loop – 100% live!

The step sequencer is divided into 16 patterns, each pattern can have from 1 to 64 notes. To change from one pattern to the following one, I use a custom pedal which works exactly like a trigger (sending a MIDI note to the step sequencer every time I press it). Regarding specific features, for each note you can decide whether it should be a "continuous" note (playing until the next note is triggered, just like the NOTE ON feature that many synthesizers have) or decide a fixed length for that specific note; and obviously you can set the velocity for every single note. In addition, you can set the sensitivity of the step sequencer using the threshold feature (just like in common drum brains for using triggers), you can decide to totally bypass the step sequencer whenever needed (so that it will not react to the MIDI notes sent from the triggers, letting me play drums without generating any electronic sound), etc.

The step sequencer is also full of utility features that are useful during the composing/creative process; features like copying and pasting a pattern, deleting patterns, etc. 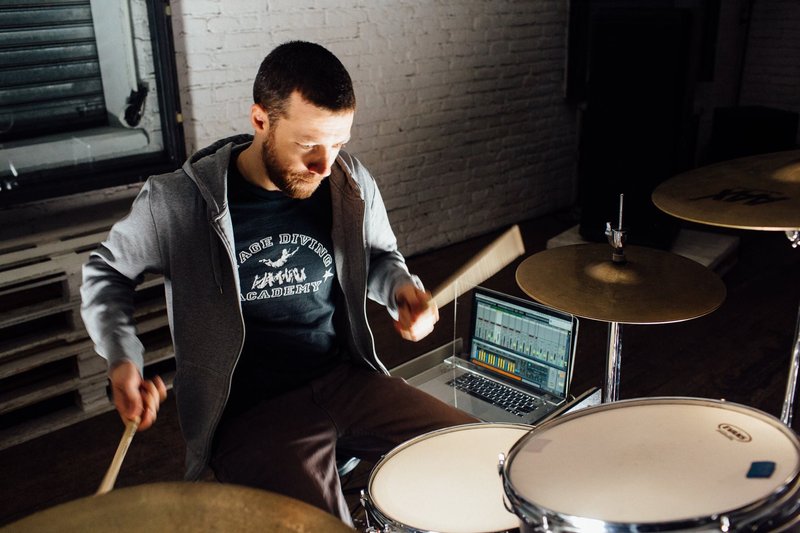 How do you write rhythms and melodies when creating a song?

The creative process was different for every song. Sometimes the song came from a guitar riff or a bass riff, or a piano piece – but most of the songs came from improvisation sessions in my studio, recording the acoustic drums and the MIDI signals coming from the triggers in the Ableton Live arrange view. Sometimes I played drums with one single synth note on the bass drum, and after finding a cool rhythmic idea, I started singing the melody in my head, then I stopped playing drums, wrote the melody in the step sequencer and then started playing drums again with that melody, and so on. In other cases, I was just focusing on rhythmic ideas in the studio – always recording MIDI signals in Live – and worked on melodies at home using the step sequencer as a sort of post-production tool.

You play both rhythmic and melodic instruments - where do you see the differences and similarities between writing for the two?

I think musicality is the key of everything, whether you play drums, a melodic instrument, sing, produce electronic music, etc. During the last 20 years, I’ve been in touch with so many drummers, from amateurs to professionals. And I think that the best drummers are the ones who think about music and not just about drumming – who have a musical approach and not just a “drumming” approach. You have to serve and feel the music, bringing your personal taste and attitude in the music you play, regardless of which instrument you are playing. So I think that if you are a good musician, there is no big difference between drumming and playing a melodic instrument (except for the obvious fact that a drum kit doesn't physically have a melodic scale in it… unless you are Terry Bozzio, but that's a whole other story!).