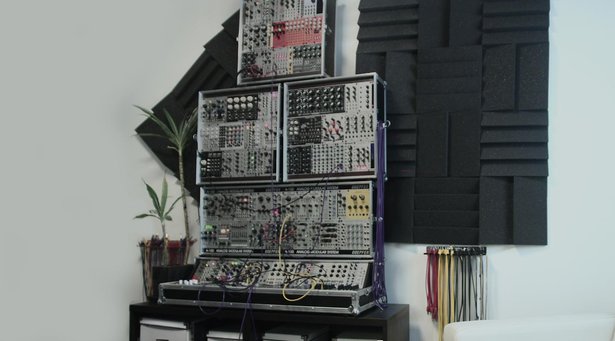 Modular synthesisers don’t exactly spring to mind when listening to Jimmy Edgar’s music. His slick style is born out of the crucible of funk and R&B, and is influenced by the mutant strains of electro, house and techno issuing from his native Detroit. Basically, it sounds sexy in a way that you wouldn’t associate with the scientist-in-a-lab-coat vibes of the modular world. Plus, his tracks kill dancefloors, while the majority of modular music is relatively cerebral.

These contradictions say a lot about the focused professionalism of Edgar’s production practice, they also show that the stereotypes surrounding modular synths aren’t indicative of their versatility in the studio. For this part of our series on modular synthesis we chatted with Edgar about how modulars can complement rather than transform your style, and help achieve functional, musical results, rather than a barrage of atonal drones and zaps.

At your last DJ set I was struck by the emphasis on super-straight rhythms and the almost complete absence of swing. It sounded like you were playing a lot of your own material, so I was wondering what part the modular plays in achieving this rigid electro-funk groove.

Well, not to get too much into my DJ set, but I organize all my tracks by the percentage they’re swung. This is purely a technical reason, but I find it a bit jarring to transition from straight into swung music, and a lot of house music has a touch of swing in it. So I separate my tracks into shuffled and non-shuffled for that reason. I love house music, but I like the house music that’s not swung.

And pertaining to my modular music, it depends. I like to experiment with swing, but you don’t have a lot of flexibility when you start introducing swing into a modular. Swing moves every second sixteenth note either backwards or forwards, and so you have to set your patches up specifically to take that into account. You either have to have a fully swung clock, or you have to just work with it in MIDI. Some modules are friendly with that, some aren’t. I just like machine-like music, basically.

A cursory dip into the modular world often involves watching demonstration videos of cross-modulated bleeps and bloops, filmed in a dark room by a faceless operator. It leaves a lot of people wondering what exactly these things are for, besides impressing your friends with complex patches.

I think I speak for a lot of people in this respect, because I only landed upon modular synthesis fairly recently after having some really bad experiences with it early on. I’ve been making music for almost fifteen years, and I was introduced to modular synthesis way back in the day, through my friend’s studio and stuff like that.

This was while you were still in Detroit?

Yeah, this was in Detroit. Like Ectomorph and Perspects – the electro guys – they were super into modular and that was cool, but when I started researching it myself I wasn’t immediately taken with it. I just found way too many people making annoying noises. This is cool to do on your own time, but when you’re demonstrating a synthesizer, I don't think it’s the most intuitive or intriguing way to do it. So basically a lot of people looking for “modular” on YouTube might be a little bit disconcerted about all the noises you can make. Messing around with no direction is a lot of fun, but I was more interested in getting something musical out of it. So, I didn’t realize that you could get great musical results from a modular until about five years ago when I decided to take the next step in synthesis and start building a system.

How did you find the learning curve?

For me it was not an issue whatsoever, for many reasons. One is that I had a background in programming. Nothing major, but I was really into Max/MSP for a couple years, so a lot of the terminology and the basic ideas of synthesis were in my head already. Programming with Reaktor helped provide a basis for dealing with the hardware too. So nothing was really new to me. I just had a lot of fun doing it and researching, so it never felt like a chore per se. I think the idea of a learning curve is for people who don’t have time for it, people who aren’t having a lot of fun. You’ve got to love the struggle.

It’s becoming more common for modular to be pitched as an entry point for budding producers and synthesists. But is getting a basic rack as a beginner biting off more than you can chew?

I don’t really see any negatives in that respect. I mean, if you’re going to jump into the deep end of synthesis, then I think you’d better have a good idea of the challenges, because it can be extremely overwhelming if you have too many options starting out. If you don’t have any kind of synthesis background, you might want to be prepared for solid research and a lot of experimentation. But, I mean, this is the great thing about modular – you know, people can just pick it up and experiment with it. You can compare it to people picking up an instrument and learning hands-on, because the modular is an instrument unto itself, depending on how you build it. And it’s never really been easier to access these possibilities. I have nothing but good things to say about the whole culture.

Your recent mix CD for Fabric heavily features your own productions, most of which have a distinctly modular edge.

For the stuff on the Fabric mix the modular is essentially acting as a drum machine and modular sequencer. I use a lot of irregular sequencing over 4/4 beats to keep a fluid mode of continuation going on. There’s a lot of modular effects processing, especially bucket brigade delays. I do a lot of EQ and filter sequencing too. I‘m also really into these Cwejman resonators. I’ve got a few of those and they’re incredible. You can send the module a basic metronome click and it rings out with this particular character. It’s sort of like the Serge filters, where you just ping the filter and it sings. Each resonator has four tuneable pitches per module, and they’re band-pass filters, so you can get marimba sounds and weird sort of metal clangs. It’s a really nice module.

Jimmy Edgar jamming in the studio with his modular

How tied to the modular are you feeling these days? Does it fit into a busy touring schedule?

In my case I’ve been without modulars for longer than I’ve been working with modulars, so I don’t necessarily need one to make my music. For me it’s just another instrument. Even though I DJ pretty much every weekend I’m still a producer at heart, and for me being in the studio is when I feel like I shine. So obviously I like to be in the studio with the modular, where I treat it as if it’s a musical device and not just a soundmaker. So I record a lot of things, take them on the road and work on them between dates. Plus I work on remixes when I’m traveling for my DJ sets, but I definitely prefer to be in my studio. It’s a balancing act between all those things.

Keep up with Jimmy Edgar on his website and Soundcloud.