What did the music of America sound like before the arrival of Europeans? What sounds inspired music in the pre-Columbian age? How were the instruments that reproduce them created? What everyday and ritual activities was music a part of?

The Metaphor of Sound, a recent exhibition, at the Museo del Oro in San José, Costa Rica invited visitors to ask these questions – and many others – as they took a tour of more than 60 musical instruments dating from 500 BC to 1550 AD. Flutes, bell clusters, whistles, maracas, ocarinas (a type of wind instrument), and rattles from the North and South Pacific as well as the Central Caribbean region of Costa Rica were among the objects on display.

Some anthropomorphic and zoomorphic instruments of pre-Columbian America

Music was of great social and cultural importance in pre-Columbian societies, particularly for the collective as whole. And so it was only fitting that, after having been brought into the Metaphor of Sound project through colleagues, Charly Fariseo – a musician, producer and Ableton Live trainer based in San José – decided to take the archeological idea of preservation and interpretation one step further.

Fariseo asked himself, why keep these instruments in ‘silence’ when we have the ability to extract their sounds, share them with the world and explore them with today’s music technology? With this in mind, Fariseo dove into the task of making multi-sample recordings of some of the exhibit’s instruments and then building them into playable Ableton Instrument Racks. 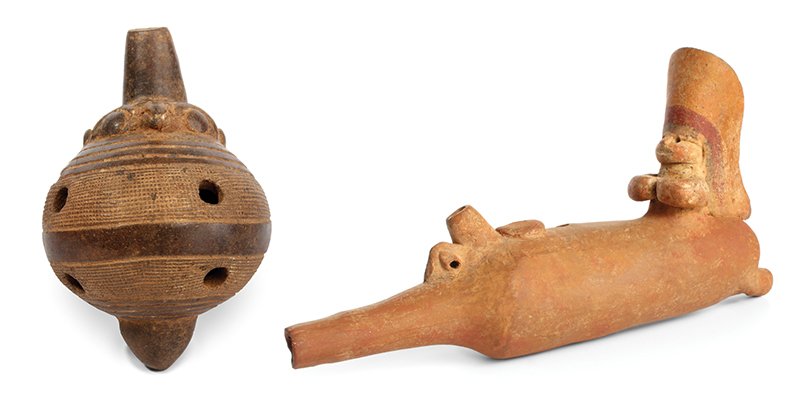 Ocarina from the North Pacific and flute from the Caribbean, both 500 BC - 300 AD

Most of the included instruments are ocarinas and flutes in a variety of timbres. These instruments were typically fashioned out of mud or clay and commonly stylized to resemble people or animals. The percussion instruments include rattles and bells. Made of gold and fired clay, in pre-Columbian times, these bells were often worked into necklaces, wrist- and ankle bracelets. The bells and rattles have been attributed to funerary rituals and other ceremonial functions.

For each instrument, there are two Sampler Instruments. One uses the original sound of the instrument with no temperament while the other instrument is fixed at a standard 440 Hz tuning. This way you can choose between the true pitch of the aerophone instrument, and a western temperament commonly used in modern music production. Each device also includes added control over polyphony and parameters such as reverb, delay, and vibrato as that modern producers will appreciate.

Many unanswered questions remain about the instruments and the music they were used to make in terms of rhythm, harmony, melody and musical structure. Based on the physical form and acoustic properties of the instruments, the exhibit’s curator and lead archeologist posit that Costa Rica’s wide variety of flora and fauna, together with its environmental sounds – water and wind, among others – may have acted as inspiration in socio-cultural creation.

As to how the Spanish and other Europeans perceived the indigenous music of the Americas after their arrival in the New World, the researcher Alejandro Mora writes in his study on the topic that “the European view of music was closely linked to the affinity or rejection that the conquerors felt for the New World; thus, some chronicles found it sad, melancholic, painful, mournful, dismal, cold and indelicate, while others found it amusing, cheerful, and delightful.”

As a part of this project, the Museo del Oro in conjunction with Charly Farsieo and DJ Lab ran a contest in Costa Rica to create a track using at least two of these sampled instruments. Have a listen to the entries in this playlist and find some inspiration for your next productions.

Keep up with Charly Fariseo on Facebook and Soundcloud.