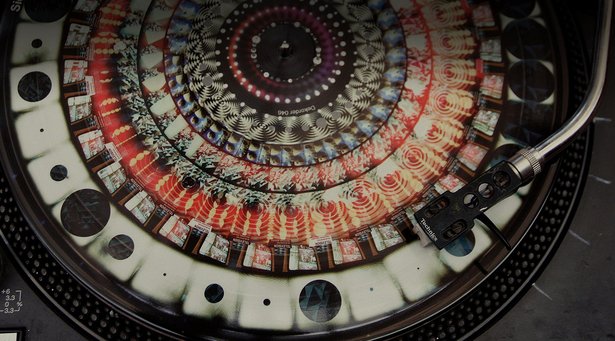 Sculpture is the London-based duo of animator/visual artist Reuben Sutherland and musician/producer Dan Hayhurst. Embracing digital and analog media, tactile and virtual approaches in equal measure, Sculpture’s immersively psychedelic audio-visual output over the past six years has lost none of the joyful ‘let’s-just-see-what-happens’ spirit with which the project began. Check out the video below to get a sense of Sculpture’s truly unique modus operandi, then read our interview with Dan Hayhurst on the occasion of the release of Membrane Pop, via Oneohtrix Point Never's Brooklyn-based Software label.

We could refer to it as an AV project but I feel the world needs more romance. It's a multi-sensory investigation into perceptual/emotional stimulation – the visible and the audible are of equal importance and each informs the other. 'Agglomerate' makes me think of an entity – something with a life that's more than the sum of it's parts. It could be manufactured, like a polymer or robot, it could be organic. Also, maybe it's a temporary state/arrangement, like it might disperse again or reconfigure.

How did the two of you happen to come together?

We were neighbours in a big warehouse in London – the kind that is just barely converted into habitable space; paper thin walls, freezing in winter, a greenhouse in summer. Reuben was working with this animation technique using discs like a phenakistoscope and a video camera, and I was contributing to the warped local conditions with this kind of odd music that I like to make... it might have been influencing his brain patterns early on in some way, leaking through the wall. Mind you, he was pretty far into the wormhole already. We knew each other for maybe a year before we started to work together. There was obvious common ground and we thought we'd test the potential of a collaboration by staging a performance. We didn't work together in advance, we just performed simultaneously without knowing exactly what the other would do. So the material itself is sort of leading the way in terms of connections being formed, juxtapositions and frames of association and reference – the interaction of different sensory elements. 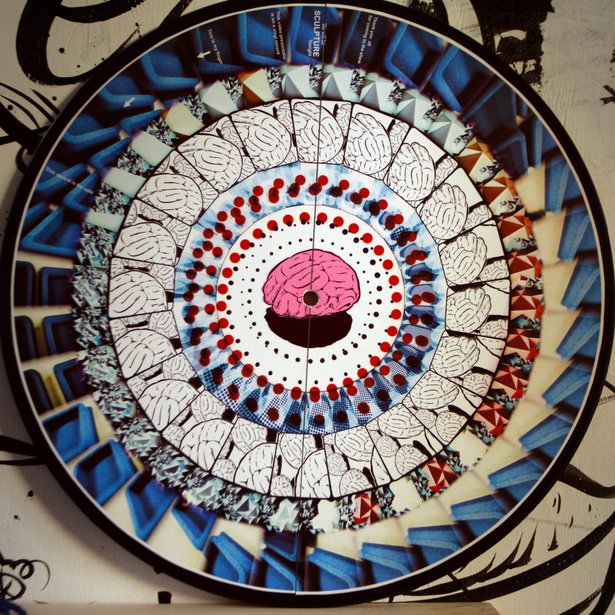 What are the commonalities of your approaches to the media you each work in?

There's a conversation between digital and physical; algorithms/processes manifesting themselves in the physical world in some way. We use techniques of spontaneous rearrangement, in Reuben's case he literally has a 'library' of hundreds of animations on printed cards – more than he can reasonably keep under control, and it's growing all the time like a nervous system. They're being generated in Photoshop and After Effects and transferred to this tactile medium. I'm combining physical cut-ups with analogue tape and hardware instrumentation (samplers / CDJ deck) with digital techniques for disintegrating and reconfiguring audio, for which I'm using Live pretty much entirely.

The 'conversation between digital and physical' that you mention – how does that become part of the production process? For instance, in the making of the new album?

I tend to work on elements of things that can be recombined in different permutations, rather than discrete 'tracks'. So, building up a library of rhythms, sounds, harmonic elements, tones, percussion etc. Things from completely different times like 'found material' recorded in 1955 but also stuff I make myself. There are things from five years ago, last week, this afternoon – stuff I've completely forgotten ever making. This 'library' is then also expanded out across various reels of tape, tape loops and samplers in the physical world. It's pretty chaotic to be honest! These sources tend to get recorded into Live at some point, and then also I'm recording Live's output back to various tape recorders (often making tape loops) and samplers like a Korg ES1 or Teenage Engineering OP1.

I'll do stuff like record an old bit of tape with some random recording from the the ‘60s on it into Live, convert that to MIDI data and use that to fire off samples in Drum Racks. These could be 'hits', but are just as likely to be longer recording like a few meters of tape. Each chain of devices would typically be Pitch > Arpeggiator > Random > Scale > Simpler. And I'll use macros to control stuff like chance of pitch randomisation, sample start point, arp rate, sample length etc. I use an APC 40 as a control surface. I'll use clip automation on the macros too. You can very quickly atomise and rearrange all kinds of material this way.

What I end up with is a collection of re-combinable elements spread across different media; Live Clips/Sessions/Arrangements, tape loops, reels of tape, cassettes, CDRs, hardware samplers. Through continually trying out different permutations both in the studio and live, routines eventually coalesce into 'finished tracks'. At that point I'm recording things back into Live and using it to edit and arrange.

Sometimes it’s layering things semi-randomly. So, for instance with the new LP, the thing that 'finished' it off was dropping a recording of a gig into the final arrangement at random and several things along the timeline just clicking with each other in just the right way. I'm really into the idea of unplanned simultaneity creating new connections/associations…

A video for Sculpture’s ‘Plastic Infinite’ release, featuring the animated picture disc on which it

What's your setup for playing live? Is there much direct interaction between you and Reuben? Or is it more a case of going down parallel roads to the same destination?

We both have a setup with enough flexibility to be able to respond to what the other is doing in the same way that two musicians would. Similarly with the way some of the music has already become 'fixed' in a repeatable routine, whereas some of it is still in an exploratory stage (and some of it is improv). Reuben has his unruly library of animation cards which he plays on a record player with a video camera suspended above it. It's visual turntablism.

He has some animations up his sleeve that he knows he wants to use when he hears certain sounds – but much of the time it's more about unplanned simultaneity. Your brain finds connections and associations in the perceptual information its receiving. And, we're generating a lot of information very quickly.... it's a high energy event. That said, we've been working together for 6 years so we know what kind of thing is going to work... it's not like it's completely random.

I don't use a computer live. I always transfer computer generated material to other media. The reason is that I find a computer/screen occupies too much attention in this context. So I have a collection of devices that act like a modular instrument. I can play it pretty well but not perfectly, so there are plenty of surprises and unplanned diversions. Reel to reel tape recorder (for tape loops), CDJ deck, a couple of hardware samplers (Korg ES1/ Teenage Engineering OP1), walkman, and effects (ring mod, echo, distortion).

Playing live, it all gets a bit out of control – we're both sort of chasing this thing that's just balanced between organisation and chaos. The way that I throw material into Live and use it to try and generate new forms in an unplanned way, that's reflected in the way I use found tape. You're looking for things that trigger emotional/aesthetic responses and sort of lead you to places you wouldn't find otherwise. From a purely 'music production' point of view, you end up with a mixture of things with different tonal qualities that combine together in a really pleasing way. It's also scrambling temporal signifiers – sounds/aesthetics that you associate with different eras. We live in a time when these kind of distinctions are being broken down by the internet and by the enormous amount of information crowding into our sensoria. We're all constantly editing, processing and organising information – our perception of reality is made up of this stuff, and it's quite enjoyable to play with.

Sculpture’s Membrane Pop is out on Software Recording Co

See and hear more of Sculpture.