In the first installment of our new series – Input/Output – we talk to one of our favorite artists about the inspirations, techniques and technology that went into her latest production. 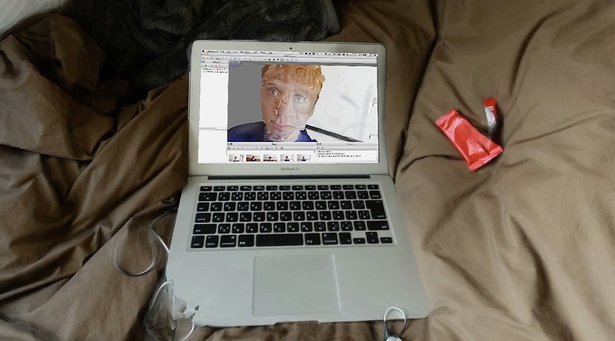 We’ve been following Holly Herndon’s many activities ever since her debut album caught our ears in 2012. Movement’s perfectly poised mixture of challenging vocal textures and strong, sensually rewarding rhythms sounded both carefully thought-out and excitingly fresh. Over the last two years Holly has played countless gigs, composed music for brass ensemble, robot ballet and electric cars and continued working towards her doctorate in computer music at Stanford University. We’ll be taking a closer look at all of these activities and more in the near future but for now we’re excited by her new track “Chorus”. Watch the video for Chorus below and then read our brief interview with the artist.

On your debut album Movement you were already making great use of vocals and the focus of these two new pieces is also unmistakably the voice. Firstly, are all the many voices we hear in "Chorus" yours? If so were they all recorded under similar circumstances?

The voices on “Chorus” are from several different sources – online browsing, synthesis, my own processed voice, samples, etc. all recorded through my laptop. I used a system designed by Mat Dryhurst, an artist based in San Francisco, with whom I often collaborate. It’s designed to spy on my own online browsing, sample the material, and smash it together. It basically takes material coming in from my browser and analyses amplitude peaks to trigger interesting interactions between the material. This was used for vocals, but also for most of the sound design.

It sounds like quite a bit of editing and arranging went into the making of “Chorus”. Can you describe the development of the piece?

This piece is probably the most hyper edited work I have ever created. I recorded hours of browsing, then added processing and re-recorded, and finally edited it compositionally. I still have a huge pile of unused material.

The bones of the track – the choral chords, the bass line and the chorus itself – were written in the summer of 2012. I integrated it into my live set as a dance jam track as I was touring Movement, and played the vocal synth parts live with gestural controls mapped to the electrical feedback from my laptop processor. People kept asking me when I would release the track, so I decided to develop it further.

I use Max for Live to map the amplitude envelope of a microphone over my hard drive. This can basically be mapped to anything- an instrument, effect, etc. Sometimes I also use it in the studio. I used it to record some of the sound design elements of my collaboration with Conrad Shawcross on the Ada Project.

By contrast, “Solo Voice”, the track on the B-Side of the 12”, sounds quite spontaneous, very much like an improvisation within some predefined parameters. How did this piece come about?

I wrote this piece for a Daniel Pearl memorial service, where I was invited to perform a ‘microclimate’ in between one of the movements of Verdi’s Four Seasons. I had no idea what to do for such an occasion; his family was there and it was held in a beautiful cathedral. I wanted to create a process that could grow an entire composition from a single voice, in a similar vein to “Breathe”, but built around tonal material.

I realized that it was a really great introduction to my work in a performance scenario, so I integrated it into my live set. I like to open with it because it gives people an idea of what I do- but stripped down to the bare bones.

This track was recorded in one take in the studio with Mark Pistell. So, yes, there is a huge difference in production on the two tracks. Although, it did take me a long time to develop the system that I use to perform the piece, the performance itself is quite simple.

The video for “Chorus” focuses in on the desktop workspace with the laptop at its center. For many people who work with digital music, design, writing and many other jobs this is a personalized space which they know intimately. Is there some kind of parallel here between the way these familiar spaces are abstracted/transformed in the video and the way the music manipulates the human voice and places it within a highly synthetic sonic space?

Yes, there is a parallel there. I have been dealing with issues of intimacy with the laptop, which was certainly a theme of Movement. In Movement I was trying to find fleshiness in digital music using the voice as a vessel, whereas “Chorus” is more focused on digital intimacy in regard to my tools/environment. This is especially pregnant given the recent information around NSA activity and personal privacy. I sometimes say that my laptop knows me better than I know myself, which is a little terrifying if there is someone watching on the other side.