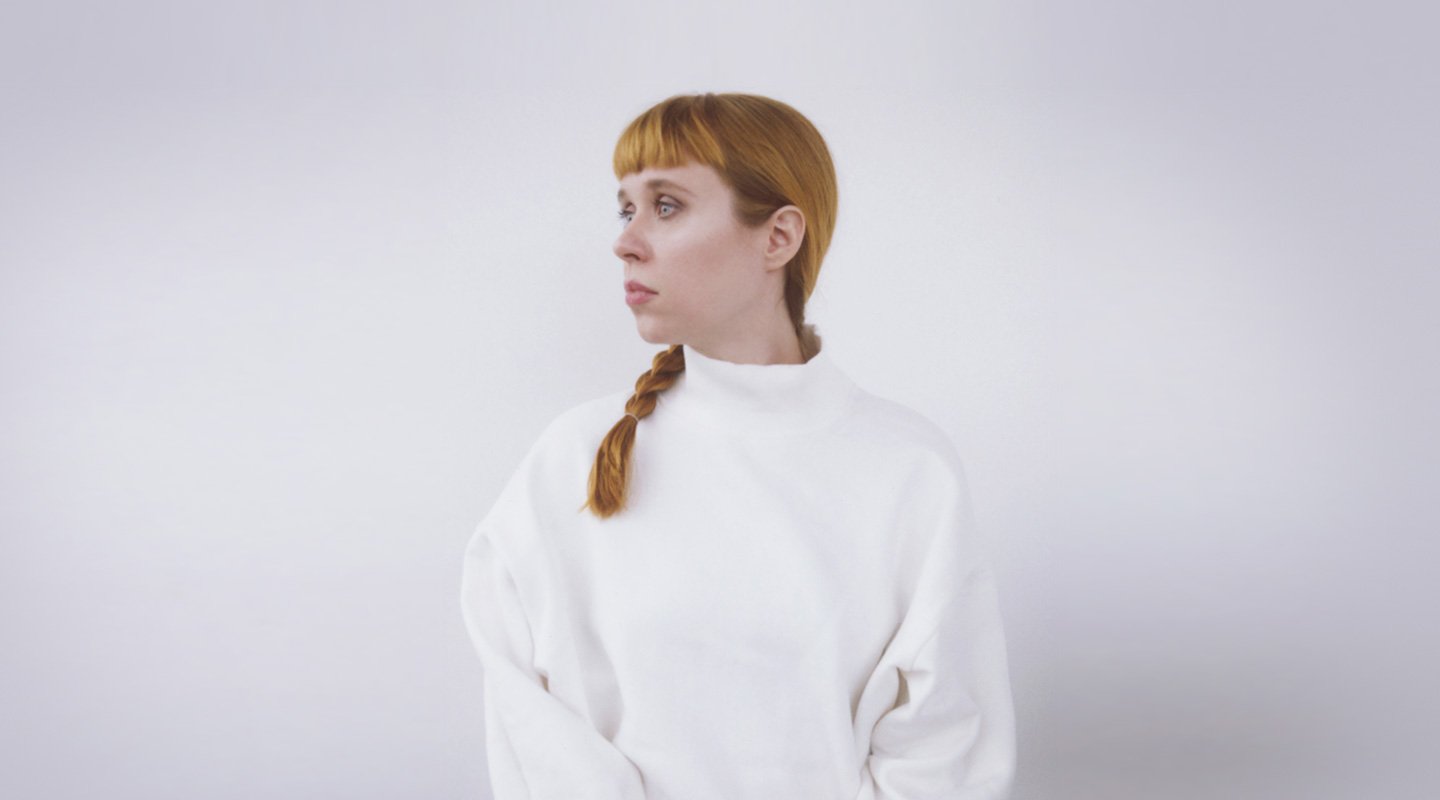 Musicians who can make interesting connections between their own work and that of artists from other disciplines are something of a rare breed. Even more seldom is the musician who reaches beyond the sphere of music to engage with real-world social issues in ways that are not mere gestures made for the sake of image maintenance. One artist who has been able to strike a credible balance between her aesthetic concerns and her political conscience is Holly Herndon – which is why it is such a pleasure to see her profile rise higher in recent years.

On Platform, her latest album, Herndon’s urgent electronics and multi-layered vocal textures continue to sidestep both academic and club orthodoxies – all while incorporating a number of radical ideas from outside the musical realm. Through her choice of collaborators, the imagery of her videos and the subject matter of her songs, Herndon convincingly connects the dots between cultural critique, utopian visions of the future and the ecstatic potential of electronic music.

We talked at length with Holly Herndon about these heady subjects as well as her production process, her unique use of vocals, and the tingly world of ASMR.

Many of the tracks on Platform are made up of many individually discernible sound elements and many discrete sound “events” per song. How does this density come about?

My writing/production is very process based, in that I will find an interesting way to generate material, then generate a load of material, and edit that into the track. There is also always a ton of remixing happening. I will write something, then chop it up, remix it and turn it into something else. It’s funny that I remix myself so much, because I don’t really enjoy remixing other people.

Can you describe how you tend to arrange and edit your tracks? Is mixing something that happens separately from the composition and arrangement process or is it a part of  the same?

It varies of course, but often starts with a particular process, whether that be a vocal patch, or a percussion system, etc. Once there is an ember it just grows. I like to establish the vocal treatment and overall palette early on, but will re-write the primary rhythm section multiple times – like I often start a track at a different BPM with an entirely different drum pattern and swing – and that could change dramatically. Like: “...what would this sound like as a jungle track? Oh shit, that actually works way better than the swung hip hop beat I was using.”

I used to spend a lot of time trying to tame a track, feeling some pressure to sculpt it into something that could be easily placed or identified, and over time that pressure has really disappeared. Sometimes you can spend 90% of your time working on something interesting and then ruin it at the final hurdle when your confidence drops before you print. It’s quite easy to feel confident about a piece that falls neatly into a genre – you adopt the confidence of decades of approval, and it can often be really daunting to ignore that impulse.

"It’s quite easy to feel confident about a piece that falls neatly into a genre – you adopt the confidence of decades of approval, and it can often be really daunting to ignore that impulse."

It’s funny, as I recently listened to some of my earliest recordings, and wish I had that knowledge then as some of the ideas are insane.

I always mix last, and I usually mix with Mark Pistel, who has a particularly good handle on dealing with the ridiculous amount of tracks I bring into a session. I think it’s great that some people mix and master their own work, but for me, I’ve always already lived with the pieces for so long and in so many versions, that I need a fresh pair of ears to help me hear clearly.

There's a great variety of voices and vocal sounds on this album. What are some techniques and treatments you like to apply to vocal material?

The voice is certainly central in my work. I always like to find ways to make it live in the synthetic environments that I build. That means that I usually don’t go for the standard pop treatment or mixing, where the vocal lays on top, and is treated like a separate entity. This drives some people crazy, but to me it embodies my approach to technology, seeing it as a part of ourselves, as intertwined and embedded.

There are several techniques I’ve developed over the years, and it varies in each environment. I’ve started incorporating voices that have been recorded through Skype, or Youtube, or other personal moments on my laptop, as well as other vocalists. I really enjoy working with other people’s voices! It’s fun to find the peculiarities that make them unique.

Platform features many collaborators, not all of whom are primarily musicians. What did your collaborators’ input make possible that you may not have arrived at or attempted alone?

Each collaborator brought something unique that I wouldn't have thought of myself. Mat Dryhurst brings a conceptual rigor, and unique production techniques, along with an intimate knowledge of my practice. Metahaven bring a political urgency, visual language, and conceptual framework that was extremely influential to the record.

One of the collaborative tracks, “Lonely At The Top” features the voice of “ASMR ambassador” Claire Tolan. How did this particular piece come about and how do you think the scenario that's enacted in the track will be (and should be) interpreted?

I became interested in ASMR by discovering it online and being drawn to the fact that it is a way for people to connect online in a meaningful and physical way. It’s really sweet that people put these videos together to soothe one another, sometimes anonymously, and often for free. My partner introduced me to Claire after meeting her at Transmediale one year. She has an ASMR radio show in Berlin, so I thought she would could be a great tutor in this area. We decided that we wanted to make a sound-play to reflect the ASMR aesthetic, but wanted to flip the narrative for a critical take on the 1%.

This article shows that wealthy people often think that they deserve not only all their wealth, but also all the opportunities they have been given, almost as if they are genetically inclined to be wealthy. It’s a coping mechanism to be able to make sense of the hideous inequality that the world faces and to be able to look oneself in the mirror. So, we thought it would be interesting to create an ASMR therapy session for this group of delusional 1%- ers. We need to hold people accountable for maintaining the current power structures.

While this targets the 1% specifically, we are all a little guilty of this phenomenon. As Claire so astutely points out in her Fader interview:

Who are some other artists you admire and would like to work with?

So many people! I would like to work with Michael Stipe. He’s from the south and has such a unique quality to his voice- it would be interesting to see what a future south could sound like. I also really like China Miéville, and find his writing to be really sonically rich. I would like to soundtrack one of his stories, or develop a future scenario together.

The imagery and text in the video for "Interference", produced in collaboration with Metahaven design studio, seems to address the entanglement of the personal and the political. "Chorus" and "Home" deal with issues of individual vulnerability to systematic surveillance. Does this new album represent an evolution in your own political conscience and a greater willingness to give it voice? What issues concern you most these days and how do they find their way into your music and into your life as a working artist?

This album is definitely an evolution in my political conscience – nicely stated. Metahaven have been a huge influence on this thinking. They modified the 2nd wave feminist slogan, ‘The Personal is Political’, to the more contemporary ‘The Personal is Geopolitical’.

Our generation faces a whole slew of issues from gender and race inequality, to increasing income inequality, to environmental issues, to government overreach – to name a few. The idea behind Platform however is not to try to prescribe a specific answer, which might seem like a cop out. Benedict Singleton talks a lot about the necessity of platform building, and inspired the album’s title.

"I think music can play a role in creating new fantasies for people to imagine life beyond the current horizon – new ways to love, new ways to live."

With the release of my first album Movement, I was invited into a group of touring artists/musicians, which has been a great privilege, for which I am extremely grateful. One thing that I noticed over the past few years, is that a lot of the festivals/performances/events not only seemed very similar in terms of content and curation, but seemed to provide a sort of escape from reality. While I understand this compulsion, and also enjoy it at times, I began to wonder what would happen if instead of designing an escape, we designed an exit from our contemporary condition. This was largely inspired by theorist Suhail Malik, who writes about an exit strategy from the cyclical structures of contemporary art, which has this incredible capacity for critique and yet somehow this rarely manifests in progressive changes to the structure of contemporary art itself (which leads to a bind). What if our art work, music, and concerts were concerned with alternatives to the parts of life that we were trying to escape? This doesn’t have to be dry/boring, this actually can and should be ecstatic and celebratory! I think music can play a role in creating new fantasies for people to imagine life beyond the current horizon – new ways to love, new ways to live.

Many of the great musical movements people reference in their works strived for these kind of environments, or shifts, and yet I get concerned sometimes that while we are happy to borrow the sonic cues from those movements, we are in danger of missing the real point behind those cultures; the new alternatives and archetypes they created. I’m not unrealistic about how much I can do with my work, but while I have the opportunity I am going to take it to start these conversations and experiment with every aspect of my practice that is possible. I don’t expect everyone to be interested in those aspects, but I am.

Creative strategies, collaboration, and making music beyond genre conventions are all themes at this year's Loop, Ableton's Summit for Music Makers.