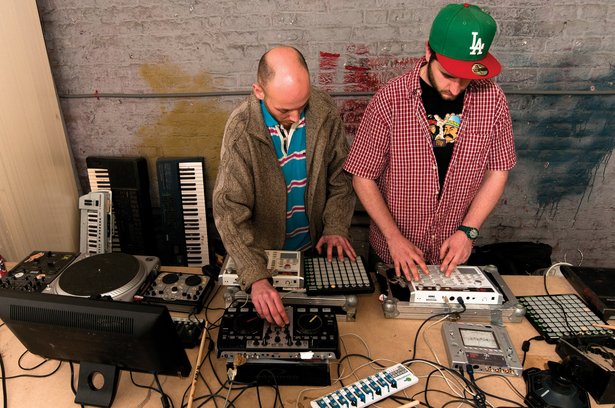 Since the rise of laptops and MIDI controllers it’s been hard to say exactly how “live” electronic music performances really are. A lot of these set-ups are a long way from the responsive, hands-on control you’d get from a guitar or saxaphone, and it leaves some producers and musicians looking for an interface that behaves more like an instrument.

The Herrmutt Lobby collective attack this challenge head on, hijacking controllers you might recognize and morphing them into intuitive tools for a truly live form of electronic music. The crew are musicians themselves, specializing in crooked, downtempo beats, but their mission as instrument designers isn’t concerned with genre; it’s about building devices which respond to musical gestures, just like a “real” instrument. We spoke to the crew about their ethos and how they hack their controllers, plus they’ve kindly thrown in one of their custom patches and a Live set, so you can discover the fun of their handiwork for yourself.

Where did this dissatisfaction with live electronic performance begin?

When the Herrmutt Lobby collective began 10 years ago, the goal was to become a live band. We’d made some records and gone on a tour but the whole live experience was disappointing, even though we had enthusiastic feedback from the public and organizers. It wasn’t much fun to twist a few knobs to control effects over a pre-recorded track. We lived in a small city with a vibrant rock scene, so we’d witness all our friends having way more fun playing live with their bands, even if it was in their garage.

We don’t like to judge live electronic sets as good or bad, but a lot of the time it doesn’t seem as fun as it should be, and sometimes a little too “ready made”. So we look for ways to move away from sequences -  the entire industry tends to work purely within rigid loops, so there’s a lot of opportunity for exploration beyond those static structures. It’s fun and rewarding to develop hands-on techniques and to test them on stage. The feeling is more like jazz, where you can improvise and the music comes more instinctively.

Back in the day, when we were writing tunes in sequencers, our friends who passed by the studio had no choice but to listen passively to what we had just produced. Only very few were interested in writing something on a sequencer. Now the space is full of controllers, joysticks, pads, iPads and homemade electronics, which are all interconnected through our real-time performance patches. Now anyone who enters the room becomes part of the jam. There’s a lot more fun in playing. We’re calling this process of playing with interconnected instruments “Real Time Systemic Music”.

What are some of the challenges in getting these devices to respond to complex, minute gestures?

The major issue when playing in real-time is the latency. To be able to use a controller as an instrument, we need to keep the latency as low as possible, preferably no higher than 4ms. Each piece of gear in a setup will add its own additional latency, be it a controller, computer or a soundcard, so we really want to kill every useless piece in the chain.

How do you go about 'invading' these pre-existing controllers with your own programs? Are you overriding their operating systems with your own software?

It would be great to be able to reprogram the “brain” of the devices we find on the market, but it’s usually impossible, or overly complicated. But virtually every device sends out MIDI controls, so we build software that links Live and the controller. When our objectives are beyond the abilities of the device, due to an arbitrary limitation in the firmware for example, we completely remove the existing electronics and connect the sensors directly to a fully programmable microcontroller, like an Arduino or Teensy, and write our own firmware to deal with the sensor data and send MIDI messages.

Herrmutt Lobby put devices through their paces and describe the mapping.

More recently we’ve transformed a Playstation 3 controller into a new wearable and wireless musical interface at the Music Tech Fest Hackathon in London. For this hack we kept most of the electronics in the pad, like the accelerometer, gyroscope and joysticks; then we removed the buttons and replaced one of the joystick with an innofadder with 3D printed augmented caps. At the same time we’ve built a very primitive pressure sensitive iPad stand to add velocity and aftertouch to an the iPad.

We’re currently designing our own controllers which should hit the market early 2016, which will be targeted to the stage. They will be more robust, with dedicated Max for Live patches that are left open to allow other hackers to play with the architecture.

Your BeatSurfing app seems like a real leap ahead for hands-on composition. How does the app’s vivid visual interface affect how you make music? How might it change what music is produced?

With BeatSurfing the composition process is changed deeply. The layout design evolves along with the music composition, and the resulting track can’t play by itself so it has to be interpreted physically to be heard. It’s no longer a music controller but a system where every element is interrelated. Everything has an impact on everything.

It’s much more like a jazz standard or a commedia dell’arte; the canvas is there, but the resulting track can change depending on who’s playing. We’ll release new apps in the forthcoming months that will extend the experience on iPads and iPhone.

Do you see your software used in ways that you didn't consider in its development?

We’ve seen some amazing usage, such as the Accessible Youth Orchestras where disabled children performed with custom instruments and iPads with Beatsurfing.

And the “iPad orchestra” from the DigiEnsemble in Berlin is pretty impressive too.

Download Herrmutt Lobby’s ‘The Counter’ and give it a try for yourself. Their clever Max for Live device allows you to play 128 sounds with only 16 pads, using an intuitive process that effectively reconfigures mapping depending on how you play the pads of your device.

Keep up with Herrmutt Lobby on Soundcloud and on their website.