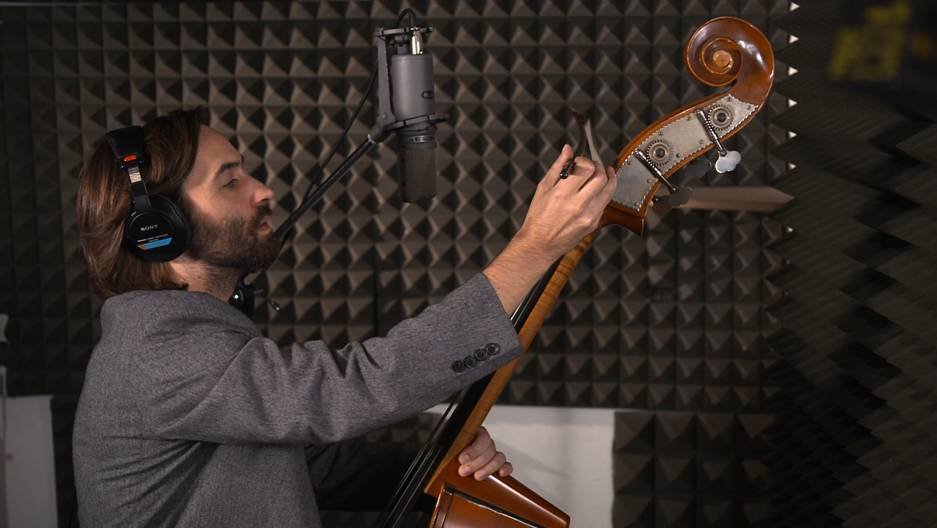 At twenty years young, Kompakt is the powerhouse of German electronic music that still functions as a homegrown co-op: its focus remains a self-contained community of producers, artists, DJs, labels and events with a sound that is as identifiable as it is evergreen. Kompakt is beguiling and quirky, welcoming yet staunchly Cologne-centric; it relates its city's rich history of avant garde electronics through a pop music vocabulary.

Kompakt's 20th anniversary demanded something unexpected and beautiful, and orchestral composer Gregor Schwellenbach was fit for the task. Having spent many years refining his transition from pop music to classical, Schwellenbach set out to do the reverse with Kompakt's vast catalogue, deconstructing 20 of the label's signature tracks for a hand-picked ensemble of chamber musicians, and the resulting  Gregor Schwellenbach Spielt 20 Jahre Kompakt album project. At the end of the 20 Jahre Kompakt Pop Up Store programme at Ableton’s Berlin headquarters, and soon after his intimate solo piano performance at the nearby Volksbuehne theater, we spoke to Gregor about undertaking the ultimate project with his favourite hometown label, and the art & intention of problem solving via music.

There are a series of David Bowie covers made with a Yamaha keyboard and a talkbox on your Soundcloud page, so you're not unfamiliar with reinterpreting music through different musical contexts.

What does this type of creativity offer to you as someone who primarily writes original compositions?

I started to do transcriptions of techno tunes and then especially Kompakt tunes to understand why I like [them] so much. At first it was just an exercise for me as a composer to understand the mechanisms behind it. That was in 2003, 2004, and it was some years later that I showed it to the Kompakt guys just to [say], "Look what I did," and then they were like, "Oh that's pretty cool, could you do some more of it?" Then we decided to do this project. At the start I was just nosy [as to] why I like it.

Were there any tracks that you just weren't able to deconstruct?

Yeah, I think it was about one to ten. We wanted to do 20 tracks, and to find 20 good tracks I started to transcribe 200 and some I cancelled very soon, but others I cancelled after the recording or even after editing. Some things are too difficult to play, some things are just boring if you leave out the electronic sound, and sometimes there's just nothing left that's worth listening to. I think I started to record 40 or 50 tracks, I finished maybe 25, and 20 tracks are on the album.

How aware were you of some of your contemporaries who have undertaken similar kinds of projects? Artists like Jeff Mills, Francesco Tristano, Henrik Schwarz, Brandt Brauer Frick, even Ricardo Villalobos, who are tying electronic and classical music together, but mostly coming from the opposite side of the spectrum as you.

There are a lot of parallels between them and me, but I didn't want to listen to [them] because sometimes I'd like it very much and then I'd think it's been done already. Sometimes I don't like it at all. I really like Tristano most of all those people. Also, those bridges between classical and other music,  can become very, very cheesy. I don't like if it's too nice or too simple, like those rock classical things which are horrible.

I was thinking something similar today: that from the perspective of certain styles of music, when an artist begins to experiment with classical or jazz orchestration it signifies some kind of elevation of the form, the utmost demonstration of musical legitimacy, even if the result itself is no good. Was that question of style vs substance something you were aware of during this project?

The thing that makes it so easy and cheesy is if you take something and play it with instrumentation that sounds very big and very expansive. If you take Coldplay and have it played by the London Symphony it's just about sounding very, very big. I did not do that. With each track I try to find the one core thing that makes the track really interesting. Then I try to be inspired by this one thing and see where it takes me.

Chamber music is traditionally played by a small ensemble, in an intimate space, to a small audience, so was the decision to apply a chamber music sound aesthetic intentional to avoid that bloated classical covers category?

From the album there are some tracks that seem naturally compatible with classical instrumentation in their original form, some which are transformed into an identifiable classical sound, and some other unexpected choices. Your version of Closer Musik's "One Two Three" sounds like a church organ piece, and Voigt & Voigt's "Gong Au" features an Indonesian-style gamelan ensemble. At what point during the making of these tracks was the decision made: 'OK, we are going to introduce this other sound'?

It was pretty early. When I listened to "One Two Three" I imagined a Brummkreisel… the thing for children, a humming top or spinning top. I used to have a Brummkreisel as a kid that had a very good sound, and I went to look in all the toy stores in Cologne to find one similar to the sound I remembered. I didn't find one, the new ones don't sound good enough, so I bought a very old one on Ebay, but that also didn't quite sound like I expected. Then [by] accident I was in a studio in Berlin recording another project and I found this pump organ. I thought this might be the right sound so I asked the studio owner if I could stay longer and decided to record it then. The "Gong Audio" thing, the first idea was very simple because the original track sounded like gamelan music to me so I went to the Ethnological Museum in Cologne. They have these huge old gamelan instruments and I looked for the guys who are responsible for those things, and asked them to teach me the principles of gamelan music. I taught him the principles of electronic dance music, and then we did this arrangement together. It was the challenge that I managed to use these expensive and precious museum gongs, that's where I got my energy from.

How heavily did studio technology factor into this project? And into your work generally?

Of the music I interpreted, many of the producers work with Ableton and you can hear that, mainly because of the structural principle that you put all of the effort in one loop first, you have a piece of one or two bars that has all the interesting elements in it, then you structure it later by making small changes or different parts. I think that's pretty much connected to working with edit mode and arrangement mode. I used a range of software and one of them was Live, but we finally mixed the whole album in Ableton which is interesting. Some people use Ableton for everything but mixing, but I did it the other way round. That was because the Kompakt guys are most used to Ableton, it's their core tool.

In a live setting you're mainly realising this project with a six-piece ensemble, right?

I did play twice with a six-piece ensemble, once in Cologne and at the Tauron Nowa Muzyka festival in Poland. Saturday I did a solo piano set. I have three versions: this six-piece version and then I have a duo, and play the solo piano.

So there are the original tracks which you re-interpreted for the album, then an additional stage of figuring out the capacity of live performance, in various configurations. Was that challenge comparable to composing the tracks in the first place?

Have all the performances been staged as sit-down concerts?

I did both - the very first concert in Cologne was a typical classical environment, and the festival was a typical dance thing with a big crowd of maybe 1000 standing and dancing, and I was pretty [anxious] before. I knew it worked in a classical context when I could explain about the music and people could be very focused with closed eyes and sitting in chairs. I didn't know [if] it worked when people dance all day and then they listen to a string quartet for a while, then they go on dancing. I may say that it worked very very well.

Do you approach those performances in the same way? Or does the festival performance allow for a bit more freedom?

I think I'm more free in the classical environment because people are so focussed on what I do so I can change things. In the dance context, I have to keep to things catchy enough to keep the energy flowing.

Which do you prefer?

I'm very happy that I can do both. That hints to the thing that I said when we started to talk, I'm very much at home in different worlds, so I'm happy if I can play in a classical context one day and in a dance context the next day. I think that's a pretty luxurious situation, and I hope to keep on with both.