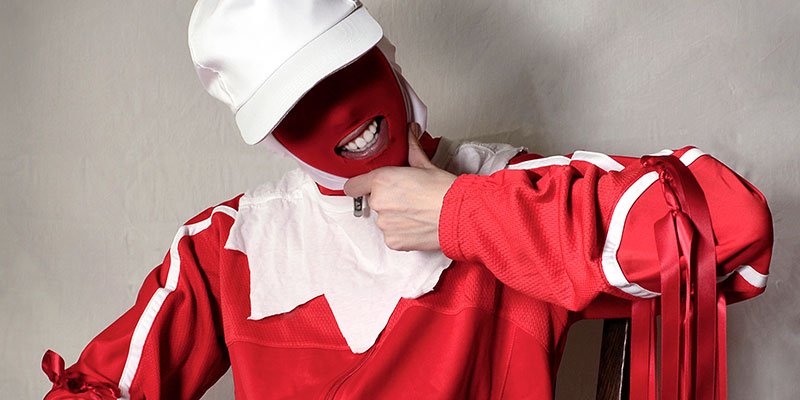 “A lot of it is just me taking the piss out of people - more specifically, English clichés old and new” says Elizabeth Bernholz, alias Gazelle Twin, when asked about the inspiration for the astonishing range of voices she adopts on her most recent album, Pastoral. These vocals, she explains, whether spoken, sung, whispered, and otherwise intoned were inspired (or perhaps more accurately, provoked) by what she says “most of us living here [the U.K.] would recognise as everyday casual racism / prejudice / xenophobia. From certain generations, from the streets, from the tabloids. My role was putting that into the production in various ways.”

Bernholz’s music has touched on dark themes before. The 2014 Gazelle Twin album, UNFLESH, has been described as a visceral depiction of puberty, phobia and gender identity – told through a spectrum of choral voices and spoken word, backed by unrelenting electronic production. Her 2016 performance project Kingdom Come, explored tribalism, social conditioning and fascism in the contemporary suburban and consumer landscape.

Her latest work, Pastoral, was made against the backdrop of the Brexit campaigns and referendum – a period of intense and vocal debate about, among other things, who and what is English. Befitting the theme of discord around ideas of national identity, the album conjures up a highly original sound world full of references to England’s idealized past – as seen through the distorted perspective of the present. Within this, Bernholz takes on the role of a 21st Century court jester, satirizing the disturbing platitudes of re-emergent populism through her extraordinary array of voice registers, textures and treatments.

Speaking with us recently, Bernholz described her approach to the vocal production on Pastoral: “Most of the album features spoken word, and I tend to treat vocals according to the mood of the song. So on the spoken stuff, the vocals are multi-tracked, in usually 4-5 layers with each one at a slightly different pitch. I like to equalise genders in my production and also experiment with the idea of a ‘chorus’ of voices. I tend to do this manually using very basic panning and pitching up or down to suggest that space and multiple genders.

I like to use a whole range of vocal production but I do stick to a few staples, I like a bit of compression on spoken word to really feel like it’s in your ear, and I tend to always use chorus in varying amounts as I like the vibrancy and sense of the unnatural that it can offer. There are some tracks where I leave things particularly dry, such as ‘Tea Rooms’ and ‘Dieu Et Mon Droit’, that’s because that voice is probably the closest to mine, so having fewer filters makes it clearer, as well as providing a contrast to the heavily processed stuff elsewhere.”

The voices on Pastoral are only part of the picture; equally arresting is the overall sound design Bernholz came up with. Juxtaposing, brash, hyper-contemporary drum machine and synth sounds with the distinctly pre-modern flavor of flute-like recorders, harpsichords, and flourishes of orchestral strings, the album seems to take place in some kind of medieval future full of strange harmonies and dissonances. As she explains, this particular combination was absolutely deliberate.

“I was initially playing with sampled recorder, pieces of early music which I loved and then wanted to see how these could work to hint at an era, but remain relevant to the record – i.e., a record being made in 2018. I almost exclusively work with samples, found or ones I’ve created. I use whatever I have to hand. For this album I made sure I was going to use a range of cheap plastic recorders, treble and descant, stuff I’ve always had since being a kid, as well as bells, tambourines and other folky sounding bits of percussion.

In contrast, I used a couple of the virtual instruments in Live – I wanted that Baroque feel but still also kind of robotic also, so I used a bit of Staccato Flute run through an arpeggiator. I like to drop in my own samples into these MIDI instruments too sometimes so they have a slightly less polished feel. I also used the FM Harpsichord with some various extra effects overlaid. I liked how this had a nice delay on it already that worked well with the album palette.”

As is the case with many electronic musicians who work with samples, developing a sound palette segues directly into the composition and arrangement process, as Bernholz explains: “On this album I think often let the natural rhythms of looped samples direct the rest - you can really hear that in ‘Folly’, ‘Throne’, ‘Mongrel’ etc. – so the tempos, the beats, the basslines and then the rest all fall into place when I feel I’ve hit on a good loop.

I work a lot to drones too – so just held notes. I don’t often modulate keys or move chords around much in my music, I tend to shift texture, tempo and mood more than anything. I think that’s the result of a lot of improv too. I also don’t really use a lot of hardware, I just use my trusty Korg MIDI controller and play around a lot with vocals.”

As jarring a listening experience as Pastoral is, it nevertheless has an overall aesthetic unity – clearly conceived as an album rather than a collection of tracks. Always mindful of Gazelle Twin’s visual and performative presentation, Bernholz came up with an ideal personification of the album’s music and lyrics in the figure of the Jester – the red and white clad joker that features prominently in the album’s artwork, videos, and live show.

“The Jester was the perfect character to embody lots of different voices, of multiple genders, ages and clichés. The whole album is in the spirit of sarcasm and mockery, and so the Jester was an essential part of that from the very beginning. When I first started writing the album I was thinking about those everyday voices I mentioned earlier, and the movements it forces you to do with your body, and facial expressions it invokes, it just felt like I was a puppet or comic performer.

Then there are the colours and the football, and traditional associations – the red and white St George’s flag, Morris dancers, and the devilish qualities or the mischief inherent of the Jester/Joker. I liked the fact that it also hints of royal court, the general historic feel to it too – all of that stuff is relevant to what I’m saying in the lyrics, the music, the artwork, but Pastoral is very much in the spirit of 21st Century England right now.”