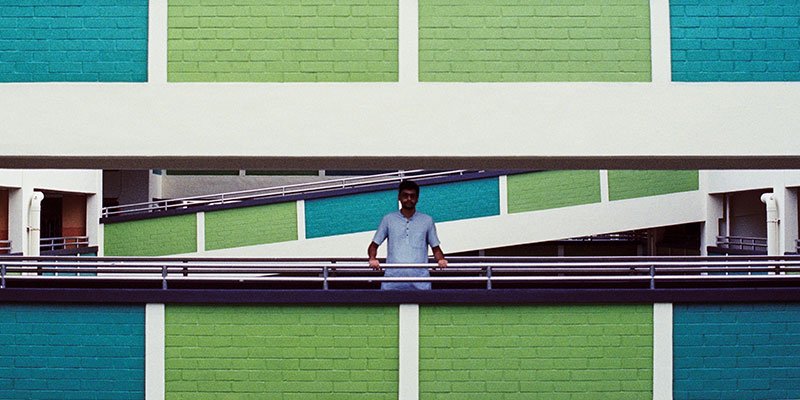 The frenetic music and dance movement known as footwork was born in Chicago during the 1990s, but its staggered snare beats have crossed borders to resonate globally.

From Peru to Japan, record labels and parties are dedicated to the genre’s rhythmic spasms. But these aren’t copycat cultures; they draw influences from traditional music just as they do from the Midwest. Spanish crews, for example, mix flamenco into footwork’s disjointed patterns, whilst heavyweight producer Surly incorporated post-war Polish jazz into his 2017 EP Trip to Warsaw.

For the Singaporean producer known as Iyer, or Nikhil Ramakrishnan, footwork was the perfect vehicle to showcase his South Indian roots. His recent albums feature syncopated percussion and tightly-wound grooves that loop around samples of Tamil chart-toppers.

“When I first got into footwork, I noticed how close it sounded, rhythmically speaking, to the Tamil songs that I grew up with,” he explains over the phone. “Tamil music has lots of energy and speed. Melodic structures are constantly changing and even slow songs have a strong tension so when sped up, it fits really well into footwork.”

Iyer, whose ethnic roots trace back to the southern Indian state of Tamil Nadu, grew up speaking Tamil and watching Tamil-language films so it’s no surprise that most of his samples are soundtracks from 90s films. Many are already dancefloor-friendly so when paired against Iyer’s abstract hip-hop production style, they morph into experimental club sounds. “When Tamil songs sound like a celebration, they’re easy to flip,” he remarks.

On his 2019 album Third Culture Tamilian, punchy increments of bass kicks and crisp hi hats merge seamlessly with the hi-gyrating moves of Tamil songs. Released under London-based Modern Ruin Records last year, the album is a follow-up to Iyer’s debut EP Tamil Footwork from 2014. There, big chunks of Tamil melodies are left intact with only minor modifications – an approach that allows listeners to discover the dynamism of Tamil music with its 80s-style synths and playful dialogue between vocalists.

Footwork typically functions on a BPM of 140-160, pairing spliced vocal samples with drum machine beats at breakneck speed. It’s related to juke, a similar genre that’s essentially a gritter and faster take on ghetto house. Iyer dabbles with juke too, but in a minimalist manner that brings to mind the lo-fi simplicity of Chicago legend DJ Nate. “Rahukaalam Rajini Rush” on Third Culture Tamilian, for instance, strips juke to its skeletal frame but it still retains a feeling of electric energy.

Ultimately, it’s footwork’s versatile nature that keeps Iyer coming back. Unlike other styles within the bass music continuum, footwork is tighter and more controlled so it’s better to blend with trap or jazz, he explains.

A student of Chicago pioneers such as DJ Rashad, RP Boo and Traxman, Iyer is part of a younger generation of artists taking footwork into the future. “I just try to pay homage to the genre’s roots,” he says. “I consider myself a vessel for the music so it’s always about respecting the originators.”

Rashad, in particular, is a major inspiration. The late artist was known for spacious chords and fluid tones that added emotion and balance to aggressive drums. Similarly, Iyer likes to create space in his music through half-time tempos and tonal contrasts. “My emphasis is on repetition, I want it to feel like a mantra. The concept that I’m going for is a marching band vibe, a crescendo that goes up and down.”

His go-to function in any digital audio workstation is the arpeggiator – a staple for creating intricate, off-speed drum sequences. Occasionally, he’ll also use arpeggiators to layer hi hats and play sequences that can’t be played physically because as he describes it, “there are no rules.”

Mostly relying on software, Iyer turns to other tools only when necessary. Those include an MPC 1000 drum machine when he’s feeling old school, and an Arturia Keylab 61 keyboard paired with virtual synths such as Serum, Omnisphere, Synth1 and Kairatune. Serum is a fun toy to play with, he notes. “It has good algorithms in place for synthesis, the sounds it can produce are compelling and grand.”

He generally avoids too many digital FXs but likes heavy reverb on samples. “The idea is to create an ethereal space that occupies different regions in the frequency spectrum, like how Rashad does.”

Tamil cinema is often dwarfed by Bollywood, India’s primary film market that operates in Hindi, but it’s well-respected for talented composers such as A.R. Rahman and Ilaiyaraaja who rank amongst India’s greatest artists. Their work throughout the 1990s and early 2000s scored much of Iyer’s early life and that’s reflected in his albums.

On “Joy and Suffering” in Third Culture Tamilian, an A.R. Rahman song called "September Madham" from the 2000 film Alaipayuthey gets a breaks makeover as pulsating claps complement the track’s sense of yearning. “The energy in that song is something that remained with me, resampling it raises the urgency the way I like,” Iyer describes.

A.R. Rahman, a household name in South Asia, has certain jungle elements in his music, Iyer explains, noting how the 2001 song “Shakalaka Baby” used the 808 drum machine. “So, of course it makes sense that I like flipping his stuff,” Iyer says with a laugh.

Motivated by a responsibility to represent the creative wealth of South India, Iyer strives to promote Tamil culture. “When people talk about Indian music, it defaults to the northern region and Bollywood. That’s always upset me because the South rarely gets the recognition it deserves.”

For instance, not many people know the deep themes found in Tamil cinema, he flags. On the song “Rahukaalam Rajini Rush,” he samples dialogue from the 1999 film Padayappa, a story of gendered power dynamics. “These are the kind of discussions I want to bring up through my music,” Iyer says.

A purist at heart, the young artist likes preserving the core essence of his Tamil samples rather than distorting them to the point of unrecognizability. “A lot of my samples are whole because I just like the original,” he says. “If they already have a musical motif, there isn’t always a need to add my own take on melody. But that changes if the motif isn’t strong or if the sample is already chopped up.”

For now, he’s comfortable sticking to popular Tamil hits rather than folk or classical melodies. “Flipping something like esoteric Carnatic music [a style traditional to South India] reduces its significance. That wouldn't be considered paying homage. Instead, I’d prefer to collaborate with someone to reinvent that sound.”

When asked whether his Indian heritage would pigeonhole him in the music industry, Iyer didn’t seem too bothered. “The storytelling aspect of the music you produce or the sets you play is important. I want to show off Tamil music so I don't care about being categorized. At the end of the day, I'm just one flavour in a diverse body of work and I’m blessed to have an audience.”

Keep up with Iyer on Soundcloud.

Minor Science: The Language of Sampling