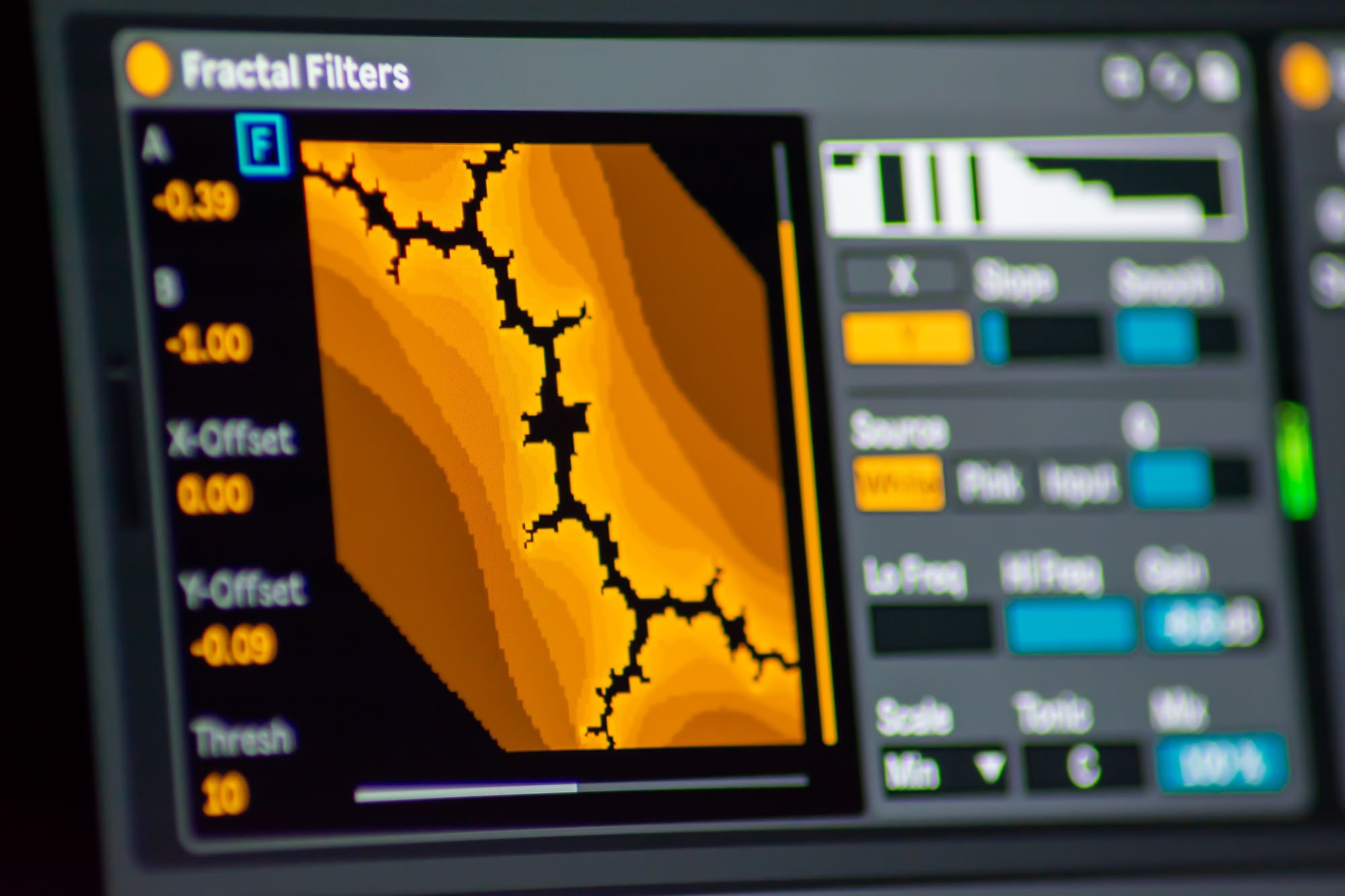 Dillon Bastan’s creative curiosity has led him on all kinds of experimental artistic adventures. He’s produced immersive audio-visual installations and mysterious AI-scripted short films, embarked upon modular synth adventures in the Mojave Desert and performed improvised sets with an eclectic assortment of musicians.

Many Live users will recognize him as a reliable source of esoteric Max for Live devices. Whether releasing creations via Ableton, such as granular-looping instrument Iota or Live 11’s Inspired by Nature Pack, or offering them for free download (or a charitable donation) on Gumroad, his visually-rich devices inspired by mathematical systems, natural processes and physical forces invite happy accidents at every step.

“Everything's an experiment for me and the devices kind of reflect that, and then they can be an experiment for everybody else using them… instead of changing a filter knob you might be changing the gravity or something. And that'll change the sound, but it's very unconventional.”

We chatted with Bastan via Zoom to find out how he got involved in programming, how he translates his far-flung inspirations into audio, and to get some tips for anyone who wants to start creating their own Max for Live devices.

Bastan first got into programming via the iOS MIDI controller app Lemur – adding little bits of custom behavior here and there, which eventually led to the creation of more robust devices that called for the flexibility of Max. The only way forward was to dive straight in.

“I literally had no idea what I was doing. I got some patch that connected with Lemur and I was just copy and pasting. And I had no idea... but it worked! And I was amazed. It was pretty empowering, I remember, that I got it to work. And so I was like "ok, maybe I can actually learn how to do this stuff" and started learning programming languages from there.”

Immersing himself in programming, Bastan read The Nature of Code by Daniel Shiffman, which explores the mathematical principles behind natural phenomena and how they can be digitally simulated. For someone with a love of nature and a healthy scientific curiosity, it was instantly inspiring.

“That tied in with my interests in dynamics, in neuroscience, in dealing with reality nature investigations, and this started to inform the devices I made. At first it was just applying some of those ideas to functional audio devices, and then later I'd go on a walk and see trees or water or something and I'd just be like ‘whoa this is really cool, how can I try to apply some of these movements to sound?’”

The way Bastan translates these concepts in his devices is at the core of their appeal. They give sound a natural unpredictability, and encourage a sense of discovery and playfulness by moving away from the traditional sliders, knobs and piano rolls and instead using ripples, fractals or particles to manipulate sound.

Generally, the devices have three elements – a simulation, a visualization and an audio process.

“If I've got a model, usually the mathematics is already there, so I just have to turn that into code if it's not already. And if it's something in nature – like a water ripple – then sometimes I'll go online and see what are some ways people have simulated those things before… then once I've got that coded, and it's the behavior I like, I'll start applying it to a bunch of things.”

If these devices feel experimental to use, that’s probably because Bastan approached their design in much the same spirit, trying his systems and visualizations out with different sonic applications before settling on one or two that sound best. Some devices feature oscillator banks, some filter incoming sound, some work with granular sampling, and some take a new approach to MIDI sequencing.

Other times, sound generation is woven into the concept from the beginning. “When I made Tree Tone [in the Inspired by Nature Pack], I was kinda like "If I grew this tree what would it sound like? If you plucked the branch what would that be like if it was a metal structure or something like that?” So I just applied the relative size of the branches as if they were little pieces of metal, so if they're longer they'd be lower in tone and louder and resonate, and then the opposite if they're smaller – they'd be higher in pitch and quieter.”

As someone who has learned to build Max for Live devices by doing, Bastan’s first piece of advice for getting started is about just getting your hands dirty and exploring what’s already out there.

“For me it was important just to actually try to make projects. Not to get caught up in learning everything and [instead] learn as I made it. I think I made quite a few projects before I resolved to actually learn this stuff. And it was easier to learn it at that point because I already had a little bit of an idea how things happened and a context for what I was learning to apply it in. And that goes with any sort of programming, including Max. And then at the very beginning it was important to find projects that already did some similar things to what I wanted to do and open them up and see how they did them.”

Copying and pasting components of other people’s work allowed him to see the many different approaches and how they functioned, then ultimately improve upon them and come up with his own solutions. And as questions came up along the way, he would sift through online creator communities to see if the Max for Live hive mind already had the answer.

“Forums are usually a good repository place. Not everybody wants to ask questions, feels confident enough, or even wants to wait for an answer – just type in a question you want to ask and probably somebody already did. And with Max specifically, and with a lot of tech stuff, there's usually Facebook groups – Max has a really good Facebook group where if you ask any question a bunch of people are probably going to answer pretty fast, with pretty good answers.”

Ultimately, Bastan’s aim with his devices is to share the sense of wonder and play he finds outside programming with music-makers through unconventional workflows.

“It’s like some kind of investigation and appreciation of the world and how to encapsulate that into ways to make music. Because there's already so many iterations on any kind of synthesizer and sequencer and drum machine... now it's about finding different ways to work with all these things in very intuitive ways.”

Download his devices to play outside your habitual ways of working and reap the happy accident rewards.

Create shuddering groans, screeching feedback or swarming white noise hiss with this device consisting of a visualization of Janus Bunch oscillators, which modulate a bank of brutal oscillators.

This device takes a probabilistic approach to automating Macro Variations in Live 11, using the Markov chain mathematical system. You can set the chance level of transitions, change the way transitions are triggered and glide between your different macro variations.

This visual synth device is based on the Swarmalators model. Each particle represents an LFO which is attracted, repelled or has its phase influenced by the other particles. You can map the particles’ attributes to different parameters of a bank of oscillators to generate shifting dissonant or harmonic tones.

Swarmalators N takes the concept of Swarmalators T and applies it to MIDI, so you can have particle fun with any sound you like. It’s great for generating melodic surprises or augmenting beats with some jazzy particle percussion.

This instrument combines a cellular automaton with a polyphonic tone generator. Draw onto the cellular automaton and watch cells either increase or decrease in strength according to their neighbors, modulating the sound to create clicky, glitchy, degraded noise.

Fractal Filters uses a visualization of Julia Set fractals to create a set of amplitudes for a 50-band filterbank. Use it as an instrument to whimsically generate ethereal tones with white or pink noise, or as a dreamy filter for incoming audio.

Use this chaos theory-inspired visual device to modulate different parameters in Live in a smooth, but unpredictable way. This device works great as a modulation source for Fractal Filters.

Add richness to your productions by using Spectral Attractors to create evolving metallic soundscapes or shifting textural layers. This enigmatic instrument uses a physics simulation to morph between multiple frozen snapshots of a sample’s spectrum.

Drip water and simulate ripples to create sonar sounds, delicate chimes or harsh noise with Ripple Filter’s oscillator bank. Or use the device’s ripple-driven FFT filter on incoming audio to filter your sounds in a natural and unpredictable way.