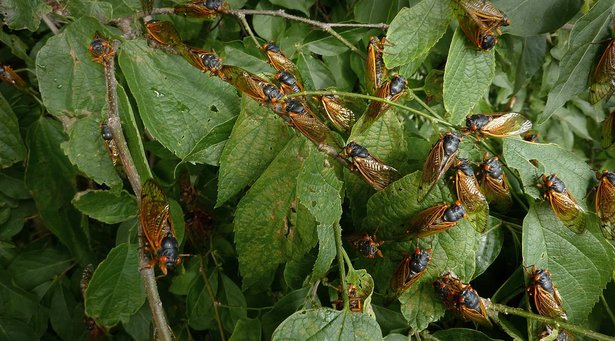 The Ableton Community is rich with unique musicians. Few fit that bracket better than jazz musician, environmental philosopher, academic and author David Rothenberg. David’s book, Bug Music, chronicles the effect of the sounds and rhythms made by insects on human music. For this feature, we hand the proverbial mic over as David shares some of his perspectives and experiences.

I’ve played duets with nightingales, mockingbirds, beluga and humpback whales, but playing with insects brings its own hazards. In the middle of a cicada invasion it’s one human sound in the midst of millions of bugs making drones and synth-like swells. I’m just trying to find a way to fit in:

Here I am trying to jam along with millions of thirteen-year cicadas at Lake Springfield Illinois, a once in more-than-a-decade opportunity that I just couldn’t pass up. I’ll have to say that there were just as many bugs inside my shirt as without, and we had to take a few in to the concert later that night in Urbana to join in with the band: 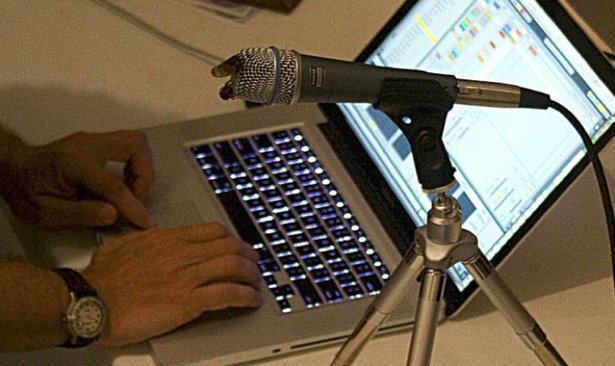 Ableton Live isn’t just useful for sampling natural sounds and working them into the mix, but it is also most useful to scientists who want to investigate how animal sounds become more intelligible to human ears when we slow them down, speed them up, or play around with their natural approaches to rhythm. For example, these Magicicada tredecims each make a simple “phaaaroah” sound but when you have millions of them doing it at the same time, it merges together into a forest-wide drone. I have recreated that here using that one individual singing patiently on the microphone, processed with cascades of uneven grain delays:

Millions of years older even than the songs of birds and whale, the music of insects is what humans were all grooving to as we evolved our own earliest music. This might just be where we got our ideas of rhythm, pattern, and the love of noise that continues on to the present day. No dubstep without bugstep!

Check out how these tiny snowy tree crickets are able to synchronize all together because inside their tiny brains there are neurons that know only one simple musical rule: if you hear another snowy tree cricket nearby, move your own sound just a tiny bit closer to that one.  After a while everyone synchronizes, the whole forest of crickets sings all in time. With the help of VJ Manzo, I developed a Max for Live patch that turns that simple synchronizing idea into a musical tool. Try it out for yourself:

By resetting one bug track at a time with the patch open, you can make the different cricket sounds go in and out of sync and generate rhythms like the ones produced by nature.

I find there is something captivating about these rhythms produced by the natural world. They come in and out of consonance, in and out of intelligibility, out from music and into noise. What is noise anyway? Sometimes it’s a sound we just don’t want to hear, but at other times it’s a sonic effect that we just love and can’t get enough of. I think our love of noise comes from an ancient yearning for the insect soundscapes of our ancestors, and you can find plenty of music throughout the world and history inspired by insect sounds.

The famous Balinese kecak monkey chant works the same way as the synchronizing crickets or the Insect Sync Max for Live patch:

Pygmies in the African rainforest are known for singing throughout their lives along with the insect, frog, and bird sounds of their environment in a kind of perfect sonic ecology. That’s the subject of the recent film Song From the Forest, that I have been working on in Berlin.

I don’t play with bugs as a joke or a gimmick. I do it to expand the sense of what I consider to be music. Since that first crazy attempt in Illinois I’ve learned it’s better to do it when there are fewer cicadas around… still enough, but only a few hundred thousand in the nearby trees, maybe not millions. There might be less to see, but the music is easier to hear. This was last summer in New Paltz, New York, during the emergence of 17-year cicadas in the Hudson Valley:

Think about it - these insects are nowhere to be seen or heard until they come out in the thousands only once every 17 years (in other species, once every 13 years). That phenomenon alone is like a great, drawn out, exactly synchronized beat, way to slow for anyone but cicadas to dance to. And they’ve all been alive underground the whole time, slowly gaining enough strength to emerge for only a few weeks to sing, fly, mate, and die.

When it came time to put it all together in an album with some live in-the-field performances, and some studio creations, I found myself interested in a whole new range of insect-inspired tonalities. That surprised me a bit in having a lot to do with current trends in electronic music, as the closing cut of my CD Bug Music demonstrates:

This year I’ve been traveling around Europe and the USA, talking and performing about all these wonderful insect musicians. I’ve written a book about the subject, which includes a chapter on what electronic music has to do with millions of years of singing insects.

Here are my Norwegian friends Mungolian Jetset doing a tune whose lyrics are actually about glitches and bugs.

And here is Imogen Heap’s contribution to a compilation CD inspired by the Biblical plagues, full of insect samples.

For a whole playlist of different kinds of human music inspired by or constructed out of insect sounds, listen on Spotify.

We live in the age that John Cage prophesied, where musicians can sculpt music directly out of sound itself, and listening to music becomes listening to sounds we never would expect could be so beautiful. We amplify and focus on the tiny creatures jamming right in their midst, and all kinds of magic is possible. Who knows what creatures will inspire us next? I am preparing to perform with four quad-copter drones. And they’re going to be talking…