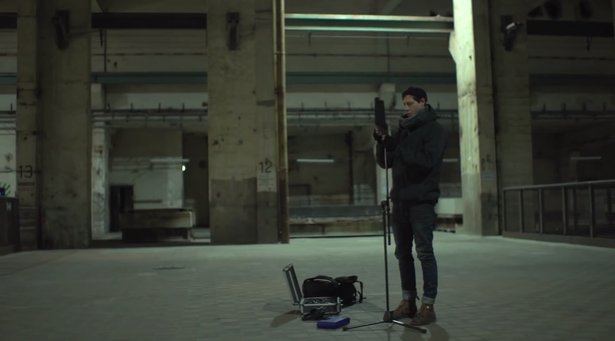 Preparing to record an impulse response.

Have you ever wondered what your sampled piano might sound like inside a cavern? Or, how about playing a drum machine in the middle of an old church? Using convolution reverb, you can apply the characteristics of real-world spaces to any audio material, all without the the cost of travel or having to find a power outlet for your synth inside an ancient stone tower.

The crux of convolution reverb is an impulse response, or “IR” - a sample taken from a space to capture its character. Using a convolution reverb, you can apply the character of any number of real-world spaces, vintage pieces of hardware, and more, to your sound. In fact, any audio file can serve as an IR - want to convolve a guitar with a cat’s meow? Nothing’s stopping you.

A short phrase dry, then run through Live 9’s Convolution Reverb on with the “Large Wood Room” IR.

Live 9’s Convolution Reverb comes with a selection of IRs from natural spaces, classic hardware reverbs, and more. There’s also a treasure trove of free IRs available from a diverse community of sound designers online. Ever wanted to capture the sound of the actual batcave? The EchoThief collection includes an IR from the original location of the batcave from the 1960s TV version of Batman.

Collecting IRs can be tricky business - to learn more about it, we interviewed Ableton sound designers Matt Jackson and Christian Kleine. “For pro work in the field,” says Matt, “it’s best to a) work at night when there is the littlest street noise possible; b) use really good signal path (loud and clean monitors, high quality sound card and measurement mics;) and c) use a long sweep (a sine wave that moves smoothly from a low to a high frequency).” Sampling from plug-ins or hardware reverb is a bit simpler - here, Matt recommends using a DC click - a short, one-sample sound impulse that provides a very “clean” sound source.

While a sweep might be ideal for large rooms, it’s also more difficult to set up. Another great tool for taking IRs is a gas starter pistol (the type used to start athletics races) - as used by Matt in the video above. Relating the story of this IR, Matt explains:

“I used a starter pistol because I can hit record on my laptop and walk around a space firing off at different locations and I don’t need to haul big heavy speakers anywhere (it’s also the most fun). A starter pistol will also color the IR a lot (and limit the bandwidth) but often that’s ok.

“When we were scouting locations for the Convolution Reverb movie we were looking for interesting places in Berlin that were large and quiet. This led us to a bunch of old abandoned hospitals, ice factories and military buildings. It was incredible, you really start to feel the history of berlin when you go to these places. Not only was I shocked by the number of unused spaces in such a popular city, but because of the history of Berlin, and the way these places were somehow left in a state of disrepair but stuck in the time they were abandoned, it was like traveling in time.

“For the video, we got in touch with the owners of Tresor who also own Kraftwerk Berlin, an abandoned power plant. It’s the same place that a month later was used for Atonal festival. It was the best place we could have imagined! Huge. Reverberant. Incredibly interesting. And no outside sounds.”

After traveling to unique spaces and unearthing rare gear, we wanted to know if there were any particular IRs that really stuck out to Christian and Matt. “Very special to me are some of the vintage hardware units, like the Stocktronics RX-4000 Plate reverb, The SwissEcho 2000 or some very old Farfisa Spring reverbs,” says Christian. “The Ursa Major Spacestation and some of the 'real spaces' are also favorites.”

“Real places are great because they sound so special and they come with this association,” says Matt. “I use Drum Booth Real, St Andrews Church, Amazing Stereo Spring, and the ABCLR M2S ones a lot. People often are drawn to the huge ones, but in practice I often use about 5 tiny short ones for stereo imaging for every big space. Unless it’s pads or dub music (of which I love both) big spaces can cloud up a mix real quickly. The convolution pro has some great tools for making the IR much shorter so sometimes I start big and then pull it down a lot as well as EQ out big chunks on the ends.”