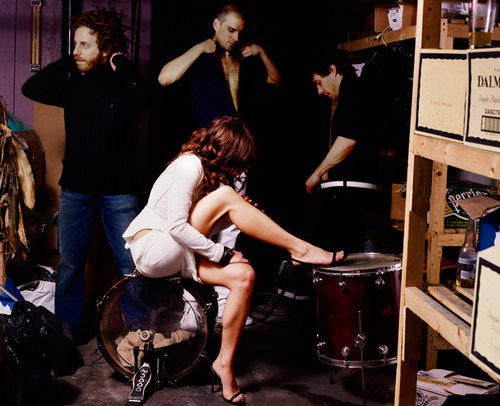 Brazilian Girls have as much buzz in the press and on the web as, well, girls from Brazil. With a vocal electronic style laced with lazy bossa and dub inflections, they've earned a spot on the prestigious Verve Records label. Vocalist Sabina Sciubba brings a multicultural vibe, singing in five languages and bolstered by keyboardist Didi Gutman, whose previous gig was with Bebel Gilberto. In the rhythm section, Jesse Murphy lays down the bass and Aaron Johnston holds it together on drums. While they focus on electronic territories, make no mistake: The players feed off each other's energy, and this band comes to life on stage. Johnston sat down to talk with us about how the band incorporates Ableton Live into their setup.

"I'm using Live along with a drum kit. At the moment I'm using my laptop with a two-octave Edirol keyboard. I'm working on going MIDI out of that keyboard and using drum pads and triggers as well. Right now I have the different drum sounds and effects that I use most often placed on the keyboard. I'm running some loops as well, but I'm not synced up with Didi's loops. I just know the tempo and drop it like that. I've gotten pretty good at it. I have another group with Jesse Murphy and Clark Gayton called Suite, and for about half of those gigs I'm not playing drums at all. I use the same setup though, just dropping more beats."

When the group isn't on stage, they're often on the move in a tour bus. This is where the portability of Live and a laptop come in handy: "Lately I've been using Live to record more. We've been on a tour bus for over a week now, and it's real handy to record things through the internal mic in the computer. Soon I'll be getting an 8-channel interface and go that route."

While stage setups often get complicated, Live can help get results even when you don't dig into its deep feature set. "I think I'm probably using it in a relatively basic way," Johnston says. "I'm still learning new things along the way. I haven't had to read the manual much at all though, which I like. It makes it easier to use the program the way you want and not the way someone tells you. Kind of like the old 4-tracks."

With the Brazilian Girls and Live, it comes down to basics: "I like how I can do just about everything with only one program."